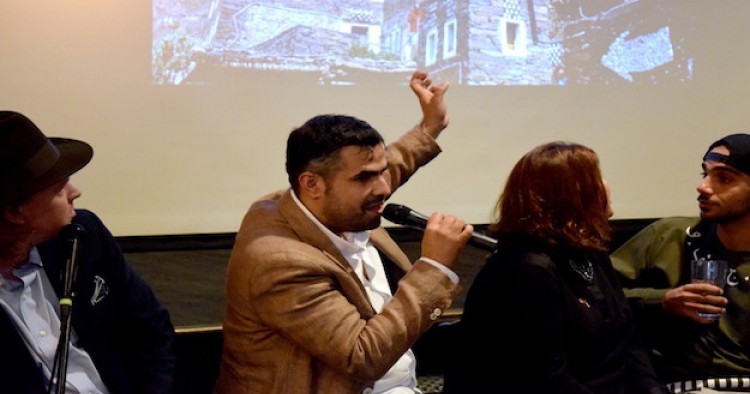 Art has long been both an instrument for openly engaging in dialogue as well as an agent to force an overdue conversation. The installations of international artists, such as Dawn Weleski, Jon Rubin, Ai Weiwei, and Theaster Gates, all engage with social issues and help introduce new perspectives or dialogue. The fusion of art and socio-political commentary thrives especially in the Middle East, where unrestricted criticism of both government and cultural norms can be seen as heresy. Direct criticism of government is oftentimes too risky to an artists’ safety; yet artists have taken advantage of liberties found in the realm of visual art. The region’s political climate is easily complemented by the nuances of visual art and the process of exploring and defining identity through art.

In this precarious space, artistic practice can take on a subversive role by stimulating conversations on societal issues. Notable examples from the region include Saudi Arabian artist Ahmed Mater, whose recent line of work directly confronts issues regarding the expansion of Mecca—migrant workers, the ethics of commercialization, and gentrification—all in the name of development. Another noteworthy practitioner is Moroccan photographer Lalla Essaydi, who also confronts social problems regarding gender through her artwork. Her photographs are subversive. The highly stylized and curated images provoke conversations about the limited domain of females within culturally Islamic settings and critique an orientalized Western gaze, while inviting conversation about social reforms from both elements of society. Both artists exemplify the creation of a safe zone, where they can criticize authorities, question established religious and cultural ideologies, and invite dialogues on reform.

The argument can be made that all art is political in terms of social engagement—all produced work is either attempting to influence society or be influenced by society. Some artists take their public platform to a high level of social engagement by directly tackling certain issues, as in the case of Mater. His bodies of work tend to directly take aim at specific issues. Mater’s recent line of photography work, produced over a three-year research and production period, is directly aimed at the human rights situation, corruption, wealth disparity, and unequal distribution of resources now plaguing Mecca, in Saudi Arabia.

Mater’s historical photography exhibition is a thoughtful and creative compilation that inspires a closer look at the effects of development, by laying out the history of Mecca and juxtaposing it with the city’s current situation. His exhibition is essentially a historical research project that culminated in a photography exhibition. The resultant book, Desert of Pharan: Unofficial Histories Behind the Mass Expansion of Mecca, features the years of research associated with the project as it systematically outlines the physical changes the city has undergone. Mater’s systematic approach to societal issues, also evident in his previous work, is particularly demonstrated in this visual history of the city and its disparity.

Ahmed Mater’s origin story is already well-known. Born in Abha, Mater was a trained physician before he quit to pursue his interest in art full time. Illumination, the series of work that catapulted his career to the international stage, embodies his desire to communicate across all lines while still making certain statements. Using both his medical background and Islamic elements, viewers are confronted with the artist’s presentation of his juxtaposed existence. His medical background also comes to play in his Evolution of Man, which rings true as a global political statement. The pieces are arguably beyond unabashed critiques of his country. Instead, they are universal statements transcending region, religion, and politics. In his art, Mater has found a safe niche—collective criticism is decisively more tolerable.

Moroccan-born, N.Y.C.-based artist Lalla Essaydi fuses her photography with social commentary in a way that keeps the artwork universally approachable while still evocative. Her usage of varying mediums is never aggressively political, but remains firmly suggestive of critical political and social themes. The female body is a central theme in Essaydi’s work. Her photographs overlaying Arabic calligraphy and female figures highlight the intersection of faith, gender, and culture. Henna plays a role in the inscription of the calligraphy, as henna is a traditional female decorative art while calligraphy is traditionally in the male domain. Gender issues within Islamic culture are a crucial element of Essaydi’s metaphorically loaded work, as is the misconstrued Western understanding of a “weak” and “submissive” Arab woman. Essaydi’s photography critiques both external projections.

Essaydi’s most recent line of work, Bullets, confronts the violence Arab women were subjected to during the Arab Spring and its aftermath. Although this body of work continues her fascination and exploration of 19th century Orientalist paintings, Essaydi’s approach toward her subjects on gender is more assertive here. The models’ metallic dresses are made of bullet shells, and while the monochromatic images continue Essaydi’s usage of henna calligraphy, the series is notably more aggressive than her previous work. The fluidity associated with her previous work makes way for an air of inelasticity in the images. Essaydi’s work continues to attempt to tackle the “orientalized” by reclaiming the production process. She uses more “aggressive” material and a more nuanced approach to setting and environment—the women command the audience’s full attention. The perspective of Arab women and their role in society is an extension of her overall critique of misrepresentation.

Issues of power, along with the limitations of collective mobilization, are part of the underlying discourse in socio-political art in the Middle East. Answers offering set directions or solutions are never offered as part of the discourse. Instead, the artwork combines an exploration of personal identity with messages of socio-political discontent. Evaluating and critiquing issues that broadly affect humanity is notoriously easier than directly critiquing local issues. It is through metaphor and symbolism that these artists can safely interact with the widest audience.