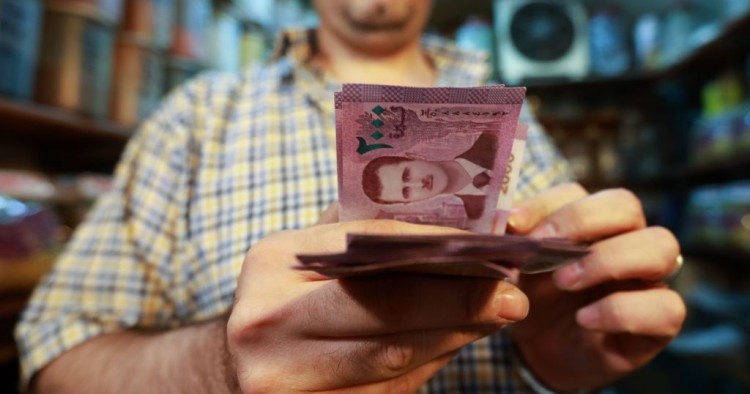 Faced with the threat of further sanctions, a volatile situation in neighboring Lebanon, and a brutally tough winter, the only thing currently rising from the embers of war-torn Syria is the value of the dollar against the struggling Syrian pound. From a pre-war level of around 50 Syrian pounds to the dollar in 2011, the exchange rate has now increased more than twenty-fold to a record high of 1200 per dollar. This marks the beginning of a dangerous new phase in the Syrian conflict as the government, fresh from its eight-year-long war for survival, tries to fend off an economic collapse from within.

Since 2011 protests in government-held areas of Syria have been a rare occurrence, but in the face of the ongoing crisis, locals in the southern town of Shahba in Sweida Province spilled onto the streets for three straight days in mid-January to vent their anger at rising prices, sanctions, and the dire economic situation.

“We want to live” the protesters chanted — a slogan that reverberated across Syria — as they were joined by people from a wide range of backgrounds, including students, store owners, and even government employees. It was not just the collapse of the Syrian pound that sparked the protests, but also the scarce job opportunities and rapid rise in living costs. While the protests were limited to just one area, the rest of the country could certainly sympathize and although short-lived, they gained the attention of both the government and fellow Syrians.

The popular Jableh News Network page on Facebook sarcastically offered some advice for the people of Jableh in Latakia Province: “For those of you in the city wanting to participate in protests, please make your way to the main square, as it’s closer to the Air Force Intelligence headquarters” — a sign, despite the sarcasm, that while people do not want a return to conflict, they do need a reprieve, as the severity of the situation and the cumulative effects of poor living conditions, sanctions, and rising prices are getting to be too much. Just after the short-lived protests the Syria Trust for Development, a government-run NGO, announced plans to provide 368 million Syrian pounds (around $300,000) for an ongoing project in Sweida to support the local population.

Despite the growing public backlash, the government’s official line hasn’t wavered. In an interview with Al-Maydeen TV in January, Syrian presidential adviser Bouthaina Shaaban claimed that “Syria’s economy is now 50 times better than what it was in 2011.” She added that the inflation of the Syrian pound was “purely exchange-rate talk with nothing official and in writing” — much to the displeasure of most Syrians in government-held areas, who flooded social media with heated posts in response. One social media activist replied, “You should contact my local corner shop,” referring to the rising prices, while another noted, “It’s ok then, nothing to see here.” The sarcastic tone of comments like this on social media underscores the war-wariness and exhaustion felt by many Syrians.

The government has taken some steps to address the issue, increasing salaries for state workers by 20,000 Syrian pounds (around $17) a month in late November 2019, but that hasn’t offset inflation — despite the rise, the net result was still a loss. Reflecting the mood of the street, social media activist Hiba Salameh said, “Unfortunately, on the ground, the situation is completely unhealthy. Prices have never changed despite the government’s actions. The people are very tired.”

The government also imposed a harsh crackdown on currency exchanges and dozens, such as al-Buraq Company, were closed just after the dollar hit its peak of 1200 Syrian pounds in mid-January. President Bashar al-Assad subsequently issued two laws, Legislative Decrees 3 and 4 for 2020, effectively banning transactions in any currency other than the Syrian pound and imposing a penalty for “broadcasting fabrications or false allegations that cause the Syrian pound to depreciate or to become unstable.” In addition, the maximum penalty for carrying out transactions in a currency other than the Syrian pound was increased to a staggering seven years in prison with hard labor.

Since the decrees, hundreds of people who traded in dollars have been arrested. The Syrian police have been active on social media as well, posting dozens of photos of men in handcuffs standing next to stacked blocks of Syrian currency and $100 notes. In one such post the caption reads, “The arrest of an individual in Adra [Damascus countryside] for using his grocery store as a center for currency trading and dealing in non-Syrian pounds.” In addition, in early January the Central Bank of Syria issued a statement that it would “limit distributing incoming remittances from abroad according to contracts with exchange companies approved by its principles.”

The recent crackdown on currency exchanges is likely to be temporary, however, and it will not address the country’s underlying economic problems. According to Haid Haid, a senior consulting fellow at Chatham House who follows Syria, “The aim of such measures is to reduce the demand on foreign currencies and mitigate the risk of individuals transferring their domestic financial assets into foreign currency holdings. However, the deeper structural flaws and lack of economic activity will certainly outweigh the short-term gains of the regime’s reactive measures.”

Meanwhile, pro-government activists have sought to rally support through an initiative aimed at boosting confidence in the Syrian currency, if only temporarily, by launching promotions to sell certain items for just one lira (as the currency is also known locally). This was done at the same time as government measures to ban alternative currency transactions with the hope of mitigating further inflation. Even fast-food stalls began offering special “happy hour one lira” prices, and the initiative was marginally successful, managing to stabilize the value of the Syrian pound at around 1100 to the dollar. In Daraa, for instance, surgeons performed over 80 medical operations for the price of one Syrian lira as a part of campaign dubbed “Our lira is our pride." Pro-government economist Amer Tayfor hoped the campaign would have a positive impact: “Enhancing the demand for the lira, preventing speculation, preventing buying and selling in foreign currencies, in addition to preventing monopoly, while regulating the prices of real estate and cars is the correct decision to take.”

Maxim Mansour, a Damascus-based reporter who has been following the economic situation closely, argued that while the currency fluctuations remain a fundamental problem, other issues, such as services, jobs, and daily necessities, have also been significantly affected: “The insane rise in prices is accompanied by a lack of fuel, heating oil, and domestic gas — in addition to the prolonged blackouts. The Syrian government has subsidized food items, such as tea, sugar, and rice, but it has been met by indifference due to the small quantity and poor quality of materials, especially rice, which has sometimes been infected by insects. This is aided by sanctions and, unfortunately, the Syrian citizens are affected.”

Lebanon instability and Caesar Act add to the pressure

Further adding to the woes, the current crisis and turbulence in Lebanon — a key player in the Syrian economy and banking center — is taking a toll on Damascus, which finds itself entangled in its neighbor’s economic problems. The inability of key Syrian economic actors to access cash as Lebanese banks tighten restrictions is creating a host of new problems. As Sam Heller, a Syria analyst at the International Crisis Group, explains, “Since the outset of Lebanon’s economic crisis, it’s become clear just how important Lebanon has been to Syria’s economic well-being. For Syria, which is subject to multiple, overlapping sanctions regimes, Lebanon has been a vital conduit for goods and funds, and somewhere for Syrians to bank their money.”

And for now that money is stuck in Lebanon, and this has triggered a steady rise in the value of the dollar against the Syrian pound. Before Lebanon’s protests began in mid-October, the exchange rate held steady at around 400-500 Syrian pounds to the dollar; it has now shot up to around 1200 to the dollar, nearly tripling in the space of just a few months — and hammering the Syrian economy in the process. Heller continued, “That’s in addition to Lebanon’s relevance as a source of remittances from Syrian expatriate workers. Now that unofficial capital controls have locked up Lebanon’s bank deposits and the country’s shortage of dollars has disrupted imports, paralyzing Lebanon’s economy, Syria’s has been paralyzed as well. For businessmen or other Syrians who put their money in Lebanon’s banks for safekeeping, that money is now inaccessible and maybe has gone.”

The Syrian pound is expected to continue its fall as U.S. administered sanctions take effect under the recently passed Caesar Syria Civilian Protection Act. The Caesar Act will add new sanctions on Syrian leaders and companies, as well as states and individuals that back the government militarily, financially, or technically, including Russia and Iran. The only way these sanctions can be lifted or halted is for Syria to agree to a number of compromises — something that is unlikely in the current climate. These include the release of political prisoners, the cessation of aerial bombardment and attacks on civilians, and accountability for those who have committed war crimes.

According to Hadeel Ouies, a Washington-based journalist covering Syria, the sanctions are tightening the stranglehold on Syria’s economy and increasing the suffering among the population. “Sanctions are affecting the Syrian people first and foremost. People in all of Syria are suffering today, in government and opposition-held areas, struggling for shelter and money. This is aided by the sanctions.”

Ultimately, the military side of the Syrian conflict has winded down and is now largely contained in certain specific areas of the country. While the government has successfully navigated the challenge of military survival — albeit through the use of sheer force and brutal violence — it must now adapt its Soviet-style state apparatus to manage the growing challenge of economic survival.

Danny Makki is a journalist covering the Syrian conflict. He has an M.A. in Middle East politics from SOAS University, and specializes in Syrian relations with Russia and Iran. The views expressed in this article are his own.

Syria is facing a COVID-19 catastrophe

Syrians on the move