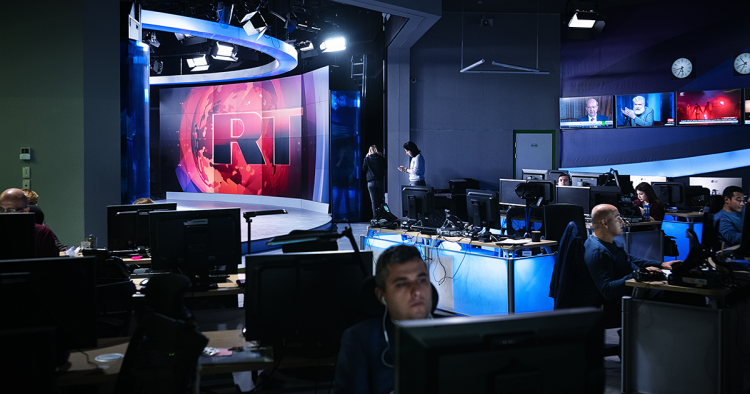 The Middle East and North Africa (MENA) region, long a target of the Kremlin’s information operations, is being flooded with disinformation from Moscow amid the invasion of Ukraine launched on Feb. 24. Prior to the war, Russia’s President Vladimir Putin gave a lengthy history lesson in his televised speech claiming that Ukraine was created by Bolshevik Russia and that it should not exist as an autonomous nation. This conflict has already taken an immense human toll and triggered the largest intra-European refugee crisis since World War II. And yet the human impact of the war, the full implications of which remain to be seen, extends beyond the physical world into the virtual realm. As missiles strike Ukrainian cities, a parallel war is being fought online — not only in Russia and Ukraine, but around the world, as the Russian state strives to disseminate its messaging. On the home front, Putin has successfully quarantined his people within an information vacuum through unprecedented crackdowns. In addition to Twitter, Facebook, and Instagram, the Kremlin has blocked access to the most popular independent media outlets, forcing hundreds of journalists to flee the country. In response, EU officials have banned content from the Russian-state-owned media outlets Russia Today (RT) and Sputnik across the European Union.

As Moscow plays out its imperial restoration fantasies in Ukraine, Kremlin-backed broadcasters are redoubling their efforts to promote Russia’s viewpoint with both domestic and international audiences. The online sphere figures prominently into the regime’s struggle to control narratives around the invasion. While Moscow’s messaging doesn’t seem to be sticking in the West, the opposite is true in Russia itself, thanks to an unprecedented crackdown on the internet. For years, the Kremlin has invested in creating a sovereign Russian internet, which, being totally independent from the global internet, could safeguard the Kremlin from the threats posed by the “CIA project” that is the worldwide web. Consequently, legislative changes and the domestic Russian internet RuNet have set the scene for the Kremlin not only to block social media platforms but also to cordon off the domestic internet from foreign content. At the same time, over the course of the ongoing war in Ukraine, independent media in Russia has been completely shuttered. Russia passed amendments to the criminal code that make the dissemination of “false information” punishable by 15 years in prison. Unfortunately, at this point, any factual reporting on the war in Ukraine is considered “fake news.” The new law has forced Russia’s independent TV channels to suspend operations. Moreover, the new restrictions imposed by Russian media regulator Roskomnadzor provide fertile ground for Moscow's propagandists to plant their narratives, as they have almost no alternative sources of information to compete with.

The Kremlin began its outreach to Arabic-speaking audiences in May 2007 by launching RT Arabic. Over the past few decades, two major events turned RT Arabic into a crucial asset. First, the Arab Spring and the role social media played in the upheaval made Russia realize that the Middle Eastern information space provided ample opportunities for the Kremlin to advance its strategic narratives. Second, Russia’s 2015 military intervention in Syria marked Russia’s return to the region and thus compelled the Kremlin to set up a local propaganda arm. As a result, Russian and Syrian media have developed strong ties, facilitating cooperation through the exchange of information and expertise, training courses on best practices for modern social media platforms, as well as co-produced TV and radio programs. In 2016, Sham FM and Sputnik, Syria’s two most popular radio stations, partnered to launch a daily one-hour radio show reporting on military developments in the country, with Russian actions singled out for praise. It is hard to measure Russia’s success in reaching Syrian hearts and minds, but evidence suggests that Russian-backed sources, with their convincing façade of formal professionalism, seem more trustworthy to the local population than the explicitly radical and one-sided propaganda channels backed by the Syrian regime.

As the role of social media keeps growing in the region, the Middle Eastern cyberspace beckons the Kremlin to expand its informational outreach. Overreliance on social media platforms for news in MENA enables Moscow to reach millions. RT and Sputnik Arabic produce significantly more content on Twitter than BBC Arabic or Al Jazeera. While RT Arabic and Sputnik Arabic have been posting a daily average of 180 and 87 tweets respectively since their creation, Al Jazeera maintains an average of 55 tweets and BBC Arabic a mere 32. In general, RT and Sputnik emphasize that the U.S. and its European allies are responsible for the instability in the Middle East while cultivating Moscow’s image as a stabilizing force. Given the resentment felt by many in the Middle East about the West’s misadventures in the region, this narrative naturally resonates.

With their solid and long-established presence in the Middle East, Russian state-funded media outlets have continued to amplify Moscow’s narratives on the Ukraine war on social media platforms. The full scale of Moscow’s disinformation and propaganda efforts is yet to be determined, but, over the past few weeks, the daily post frequency of the RT Arabic and Sputnik Arabic has increased significantly on Twitter (by 35% and 80% respectively). According to the TruthNest analysis, three out of the six most popular tweets by RT Arabic in the period of March 3-12 amplified conspiracies spread by the Russian Ministry of Defense about secret biological laboratories developed by the US in Ukraine. The third most popular tweet in the period of March 25-April 4 was a video claiming that a Ukrainian military commander had ordered the massacre of civilians in Bucha. Sputnik Arabic, which has less outreach than RT Arabic but offers a less equivocal editorial stance, has been spreading falsehoods, claiming, for example, that President Zelenskyy had left Ukraine to hide out in the U.S. Embassy in Poland. The second most retweeted post on Sputnik Arabic in the period of March 2-12 was a video blaming NATO for the current war between Russia and Ukraine and arguing that Moscow was working to avoid a “world war scenario.” Both RT and Sputnik Arabic refer to Russia’s actions in Ukraine as a “special military operation” (“العملية-العسكرية-الخاصة”), as the terms “war” and “invasion” continue to be banned by the Russian state. Some recent articles on RT’s website quote Russia’s Ministry of Defense officials, doubling down on the message that Russia did not bomb Mariupol and blaming President Zelenskyy for plunging Ukraine into chaos. 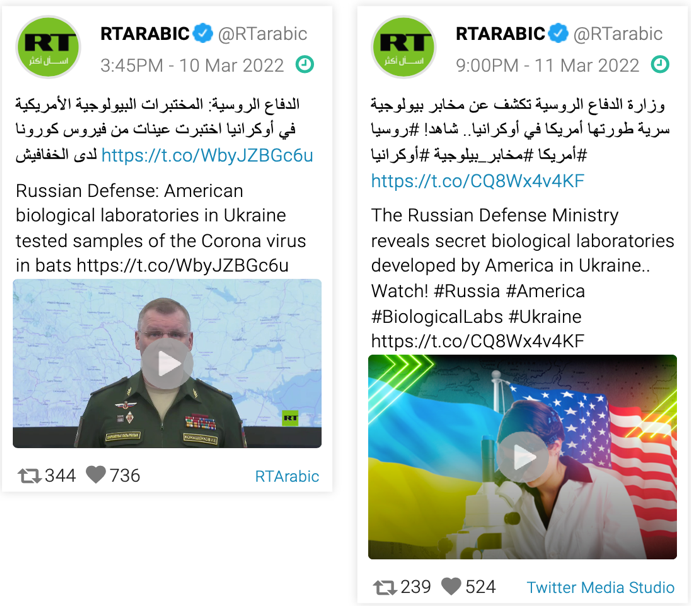 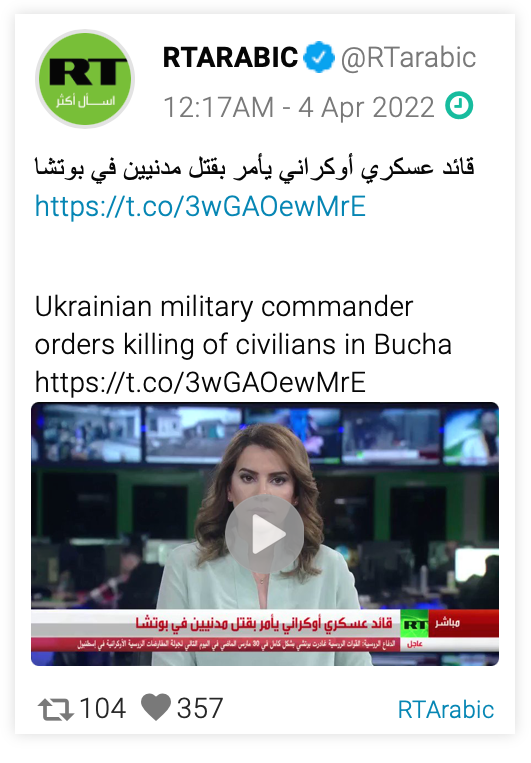 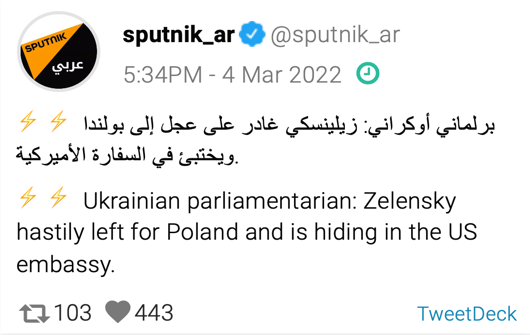 Who is winning the information war?

When Russia attacked Georgia in 2008, the country was unprepared to counter Russia’s disinformation efforts in the early stages of the conflict. Moscow's control of the narrative caused widespread confusion and blunted the outrage that Americans and Europeans may otherwise have felt. Unlike Georgia 14 years ago, Ukraine seems to be winning the information war against Russia. Tens of thousands joined rallies in cities across Europe, the U.S., and South America in support of Ukraine, demanding an end to Russia’s invasion. It is less clear, however, how Russia’s invasion of Ukraine is being viewed in the Middle East. As RT and Sputnik Arabic intensify their disinformation efforts, it is difficult to ascertain how convincing their narratives are. In any case, a survey conducted seven months before Russia’s military intervention in Syria found that RT Arabic was among the top three most-watched news channels in six Arab countries (Egypt, Morocco, Saudi Arabia, Jordan, the UAE, and Iraq). Despite a lack of research, there is every reason to believe that these numbers have only increased over the past few years.

Implications of the war in the Middle East

The war in Ukraine has direct implications for the Middle East, not least because of reports that the Russians may be recruiting Syrian volunteers to fight in Ukraine. After its military success in Syria, Russia emerged as a significant powerbroker for autocrats across the region. In comparison to the U.S., which is often perceived as an invader, Russia, with its relatively limited engagement in MENA, generates less controversy. Over time, as the U.S. has scaled back from the Middle East, even Washington’s traditional allies have started diversifying their foreign policies, strengthening economic and political ties with Russia. As a result, most of the countries in the region have refrained from directly opposing Russia and its war. The Russia-Ukraine war will significantly affect the countries of the region in their attempt to navigate between the interests of the U.S. and Russia. With these power dynamics in play, a lot will depend on the effectiveness of American and European efforts to help Ukraine confront Russia both on the ground and online.

Elene Janadze is a postgraduate student in International Security, Intelligence, and Strategic Studies at the University of Glasgow and a Graduate Fellow with MEI’s Cyber Program. Her research interests are Russia’s Middle East strategy, Russian disinformation and influence campaigns in MENA. The views expressed in this piece are her own.