“Diplomacy of attrition”: How will the Russia-Turkey stand-off in Nagorno-Karabakh play out? 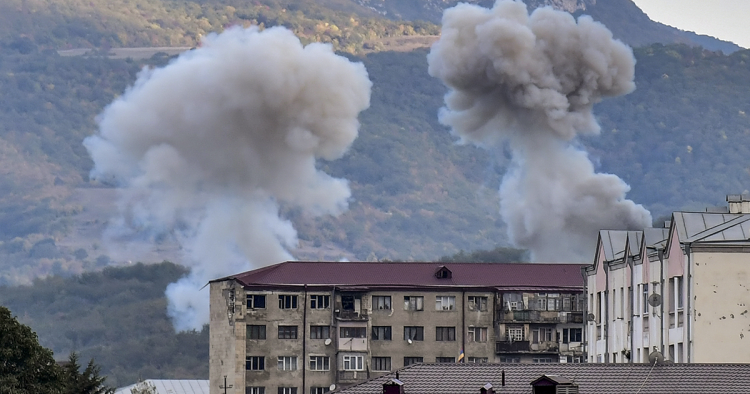 Over the past few years, both Russia and Turkey have played key roles in the world’s hottest conflict zones. Usually on opposite sides and often on the verge of a direct confrontation, Moscow and Ankara have demonstrated a knack for brinkmanship and crisis management through diplomacy. While both sides have suffered casualties, they pulled back before any fight got too big. On Sept. 27 the latest in a series of conflicts emerged when fighting broke out again between Azerbaijan and Armenia over the disputed territory of Nagorno-Karabakh. With Turkey and Russia on opposite sides once more, the flare-up in the South Caucasus will be a major test of whether their relationship will bend or break.

In keeping with its approach to other conflicts, Moscow has called on Armenia and Azerbaijan to cease fire since day one. Ankara, in turn, has supported Azerbaijan in what the Azeris have defined as a bid to “restore territorial integrity.” Turkish President Recep Tayyip Erdogan’s stance is likely driven by his ambition of extending Ankara’s influence in the Caucasus. In order to project Turkey’s power and further its regional aspirations, he has been hopscotching crises — from Syria and Libya to spats with Greece and Cyprus and now Nagorno-Karabakh.

Ankara’s goals in the South Caucasus

From Moscow’s standpoint, Turkey appears determined to achieve two primary goals in the Caucasus. The first is to shift the status quo in the Nagorno-Karabakh conflict in favor of Azerbaijan, a long-time ally with which it shares close ethnic and linguistic ties. The second and more important goal is to ensure a new role for itself as a mediator, over any possible objections from Armenia. (Ankara and Yerevan have no diplomatic relations and their land border has been sealed since 1993.) When it comes to conflict resolution initiatives, Erdogan is skilled at gaining a seat at the table, even when major actors find his presence undesirable. For example, Syrian President Bashar al-Assad is not happy that Turkey is part of the “Astana group” alongside Russia and Iran. Likewise, Libyan strongman Khalifa Hifter has openly sabotaged other Libyan actors’ agreements with Erdogan, even when they are backed up by guarantees from Russian President Vladimir Putin. What matters to Ankara, however, is that its new status in the Nagorno-Karabakh settlement is embraced and recognized by Moscow. Meanwhile in Russia, President Putin has been in contact with both Azerbaijani President Ilham Aliyev and Armenian Prime Minister Nikol Pashinyan and welcomed the foreign ministers of both countries to Moscow for cease-fire talks on Oct. 9. Given this development, Russia may just find a way to deny Turkey even the most scanty of mediatory roles.

To achieve its second objective, Turkey has had a strategy that now looks less likely than ever to succeed: Ankara has wanted to either join or form a viable alternative to the OSCE Minsk Group, the international body spearheading efforts to resolve the Nagorno-Karabakh conflict. Since its founding in 1992, the Minsk Group has been co-chaired by Russia, France, and the U.S., leaving Turkey to play second fiddle. To a degree, Turkey has hoped to copy Russia’s own approach to the Geneva conferences on Syria, when Moscow decried the talks’ ineffectiveness and created a parallel track in Astana. Once the Astana process helped Assad to regain control over territories held by the opposition, Russia could return to the table in Geneva with greater international support and legitimacy.

Statements from Turkish officials suggest they are indeed aiming to replicate this approach. While Erdogan criticized the Minsk Group, Turkish Foreign Minister Mevlut Cavusoglu later stated that Ankara is ready to work with Moscow on the Nagorno-Karabakh issue. The president’s criticism justifies the opening of a parallel negotiation track, while Cavusoglu’s more conciliatory tone keeps alive the prospect of a greater role for Turkey under the current system. The contrast between the two statements also indicates a more general policy concern for Turkey: Russia has grown to be both a problem and an opportunity for Ankara as it seeks to project power and influence across former Ottoman lands.

Addressing the Turkish Parliament on Oct. 1, President Erdogan said,“The crisis that started with the occupation of Crimea in the Black Sea can rise again any time. The clashes that started with the attack by Armenia, which occupied Nagorno-Karabakh, against Azerbaijan are the most concrete examples of this.” It is clear from declarations like these that Turkey sees Russia as encroaching on territories that it hopes to draw into its own sphere of influence.

At the same time, Turkey has come to see Russia as providing an opportunity to increase its own strategic autonomy vis-à-vis the U.S. and NATO. Yet, a repeat in Nagorno-Karabakh of a Syria-style deal along the lines of the Astana talks is unlikely for several reasons.

In Syria, Turkey’s decision to join Russia and Iran was a forced, tactical choice. After downing a Russian jet in November 2015, Turkey found itself under severe Russian sanctions. With little political and no financial or military support from the West, Erdogan had no hope of getting “everything he wanted” in Syria, so he opted to bandwagon with Moscow and Tehran to get “at least something.” As a result, some pro-Turkish opposition groups in Syria have softened on Russia, Iran, and the Syrian Army, while others disbanded, by force or by choice. All of this played into Russia’s interests: Turkey was pulled away from the coalition of the willing to topple Assad and began to conduct shuttle diplomacy between Syrian opposition groups and Moscow; Russia-Turkey relations reached unprecedented heights; and Russia increased its authority as a great power.

But the South Caucasus isn’t Syria

In Nagorno-Karabakh, however, none of these conditions are in place. The Minsk Group, imperfect though it may be, helps advance Russian interests and is actually one of a few venues that might spur Russia-West cooperation on Nagorno-Karabakh, since all of the others have failed. Most importantly, Russia is the controlling security stakeholder in the Caucasus and has no interest in “selling its shares” to anyone else — be it the U.S., the EU, or Turkey. In terms of the Nagorno-Karabakh conflict specifically, Russia believes that it has enough leverage over both Armenia and Azerbaijan to make deference to Turkey unnecessary. Russia’s other interests in the region, including separatist movements that it supports (South Ossetia and Abkhazia), mean that the Kremlin is unlikely to cede any ground.

The Turkish leadership, nonetheless, is holding out hope for a partnership with Russia. This makes sense from Ankara’s perspective, as it knows it cannot win regional standing through a war with Russia that would overstretch its resources. Nor does Moscow want a war. Domestically, a direct military engagement in the South Caucasus would likely be costlier for Putin than it would be for Erdogan.

Most importantly, Russia and Turkey have differing ideas of what constitutes “success” in the South Caucasus. To achieve its vision, the Kremlin must deftly balance between the competing interests of different partners. Success for Turkey, however, depends on the simpler task of providing enough political and military support for Turkic groups (e.g. Azeris) to feel that it has done its duty.

Accepting a new role for Turkey in the South Caucasus might weaken Russia’s position in the long run, even if Ankara’s aims are limited in comparison with its own. It would also likely be disastrous for Armenia and unacceptable for the EU. To a certain extent, greater Turkish influence would even be detrimental to Azerbaijan, as it will reduce its room for maneuver and make it more dependent politically, and perhaps even ideologically, on Turkey. Yet, Baku’s criticism of the Minsk Group’s performance suggests that President Aliyev is frustrated by its perceived bias in favor of Armenia and by 30 years of unsuccessful efforts to resolve the conflict. Although Aliyev is careful enough to speak well of Russia’s role in the process, Azerbaijan’s turn toward Turkey shows that it is now thinking more about the benefits of having a powerful regional actor speak for its interests on the international stage than about the price it might have to pay for this support.

Turkey’s maneuvers have caused alarm at the highest levels of the Russian state. Russia’s Foreign Intelligence Chief Sergey Naryshkin stated,“Turkey's explicit and definite support for Azerbaijan is a principally new external factor to the Karabakh exacerbation.” Since the flare-up in fighting, Naryshkin has frequently spoken out on the matter, which is unusual for someone in his position. Yet this statement is also a perfect summary of what Moscow sees as the key difference from previous clashes over the disputed territory. Evidently, Russia is at a crossroads vis-à-vis Turkey’s aspirations in the South Caucasus and must choose one of two paths: either strike a deal with Ankara to accommodate one another’s ambitions and security concerns or break Turkey’s will through “diplomacy of attrition.” In the latter case, Moscow won’t reject out of hand any of Ankara’s proposals for cooperation, but will fight its rival on other fronts around the world. For example, Russia could egg on Assad to target pro-Turkish groups in Idlib or ratchet up its support for Hifter in Libya against the Turkish-backed Government of National Accord. At the same time, Russia will make certain that Turkey does not get to wield too much influence over either the Minsk Group or any of its more ad-hoc mediation efforts.

In the Middle East, Russia has grown into a skillful player. In post-Soviet politics, it has mostly been rather clumsy. In the Caucasus, throughout its history, Russia has been both. From working with allies to countering rivals, it will soon be clear whether Russia has learned something in the Middle East that it can now apply to its own “near abroad.”

US-Iran escalation and its implications for the South Caucasus