'Disgraced' Exposes the Contradictions of Identity 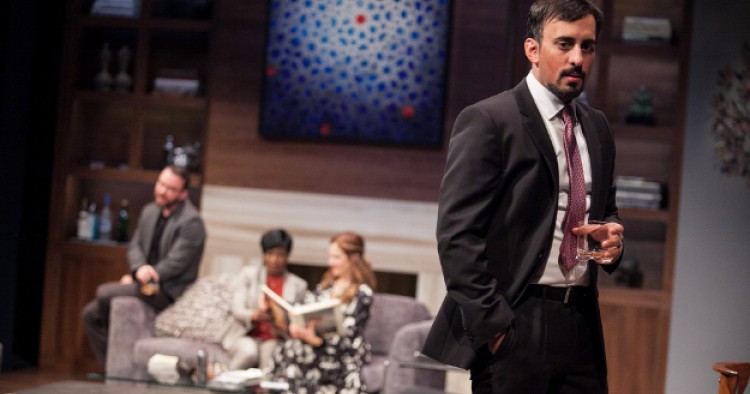 Unsettling is perhaps the word that best describes playwright Ayad Akhtar’s Disgraced. The intensity of the scenes provoked uncomfortable shuffling in seats, and reduced one audience member to tears. The Pulitzer Prize-winning play, featured by Arena Stage in Washington until May 29, should be commended for its bold attempt to tackle one of the most complex and sensitive issues dominating today’s political discourse: Islam and identity. With a presidential candidate declaring the prohibition of Muslims’ entry into the United States a key policy platform, Disgraced offers a snapshot into the microcosmic impact such policies, and political rhetoric, have on the daily lives of American Muslims.

The play is centered on Amir Kapur, a lapsed Muslim, and his wife, Emily, who battle over their conflicting perceptions of Islam. Each character is deeply entrenched in their respective position—Amir maintaining a hostile, radical view of Islam, while Emily forming a moderate, appreciative stance—and spends a significant portion of the play attempting to convince the other of the ‘true’ Islam. Their tension is exacerbated by Amir’s extremist-leaning young nephew, Abe, and Emily’s Jewish art dealer, Isaac, who serves as a provocateur in drawing out Amir’s deepest and darkest opinions on issues related to political Islam. A climax is reached toward the end when Amir and Emily host a dinner party for Isaac and his wife, and Amir’s colleague, Jory. No taboo remains as the dinner party descends into an explosive argument over Islam, Israel, and 9/11.

Akhtar presents two stark choices many Western Muslims are facing when confronted with the hostility espoused by the likes of Donald Trump: retreat—as portrayed by lead protagonist/character Amir Kapur’s self-loathing, or radicalize as per his nephew, Abe (a selected inconspicuous alternative to his birth name, Hussein Malik). Any attempts to establish a middle ground—fervently, and perhaps naively, pursued by Emily—are snuffed out by the pulling power of the opposing extremes on the spectrum. Indeed, such a portrayal has a resonance in the current pressures experienced by Western Muslims, and aptly captures the struggle of moderate Islam to have its voice heard amid the noise of extremism emanating from both sides. Emily’s well-intentioned campaign to have Amir reconcile with his heritage, and her ultimate and spectacular failure, is an intuitive representation of the ongoing struggle between the rational and extreme interpretations of Islam.

Emily’s insistence on portraying Islam as a religion steeped in a history of cultural, scientific and spiritual excellence and innovation is vociferously, and violently, opposed by her husband’s stubborn refusal to see Islam as nothing more than a collection of outdated, “backward” ideas that promote savagery. The rift between Emily and Amir is a snapshot into a broader struggle of competing interpretations of Islam, veering from the moderate that appreciates Islam’s contribution to science and culture, to the more radical, puritan and politicized understanding. This representation extends to the characters’ divergent personas—Emily, a calm, articulate individual who argues her point with reason and persuasion, and Amir, a bitter man who can only express his views through volcanic fits of rage. The rupture is so severe that it ultimately destroys their marriage, with Amir resorting to violence and striking his wife, an act that drew the immediate shock and repudiation from the audience. The play ends with their official separation: a powerful damnation by Akhtar that moderate and radical Islam are irreconcilable?

An audience member in the post-show conversation criticized the playwright for including the scene of domestic violence, believing it falsely linked the act to some inherent Muslim behavior, given Amir in a previous scene alluded to a passage in the Qur’an that potentially condones a husband striking his wife. Indeed, Akhtar toyed with controversy by allowing for such a predictable interpretation. However, if the Emily-Amir feud is extrapolated as one between the forces of moderate and radical Islam, then violence is by no means a foreign language. In fact, violence is the only means in which those who hold extremist views of Islam, as Amir is revealed to share through his sympathetic views on the 9/11 attacks, can effectively communicate their message. Confronted by the rational perspectives of Islam, the radical viewpoints flounder—as Amir did.

Akhtar draws out, perhaps predictably so and as noted by several audience members post-show, the implicit biases that fuel the divergent opinions of Isaac (Jewish) and Jory (African-American), despite all sharing a similar professional and socio-economic status. This contention reached a pinnacle during the characters' debate over Israel, and Isaac’s allegiance to Israel versus Amir’s silent wish to have Israel wiped off the map. Tempers flared further when Amir expressed sympathy for the 9/11 attacks, to which Jory reminded Amir that “you are an American,” implying a duty to his national identity.

The juxtaposition between transnational (religion) and national identities, and the resulting tension—irrespective of title or color—are laid bare. While the play is primarily focused on the competing interpretations of the set of values associated with Islam, and the sense of duty associated with being an adherent to the religion, Akhtar aptly reminds us through Jory’s “American” remark to Amir that national identity also contains its set of socially constructed values, and expects a form of allegiance not dissimilar to religion. Disgraced exposes the complexity that arises when nationalism and religion contradict in particular circumstances, and compete for the allegiance of their presumed subjects.

Amir’s internal struggle exemplifies the incompatibility of these two ideational forces when the inherent ‘values’ and ‘biases’ are in conflict. Akhtar could have played this out further by exploring a similar competition of identities within Isaac with regards to his views on Israel, or demonstrated, through a deeper probe of Emily’s appreciation for Islam, that such ‘allegiances’ are not fixed, but malleable. But the question Disgraced poses is evident: is there a priority in the order of nationalism and religion, and thus our national and religious identities? Is Amir wrong to prioritize, what he perceives to be, allegiance to a political Islamic viewpoint over that of his home country, the United States? Does Isaac’s transnational identity—Judaism—come before or after his national identity—American—when it comes to questions of Israel? That the play ends inconclusively, with the lives of all four characters seemingly in disarray, suggests these questions were designed to be answered beyond the theater.

Photo Caption: Nehal Joshi as Amir, with Joe Isenberg, Felicia Curry and Ivy Vahanian, in Disgraced at Arena Stage at the Mead Center for American Theater, April 22-May 29, 2016. Photo by C. Stanley Photography.