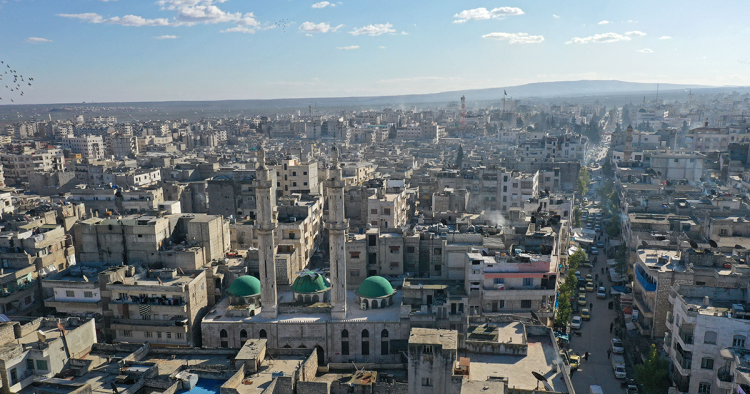 The war in Syria started more than ten years ago with a ferocious regime crackdown on nonviolent demonstrations but transformed rapidly into a hydra-headed conflict. Syrian citizens with Gulf support took up arms to defend themselves, extremists rushed in, Iran and its proxies upped the ante, and moderate and extremist opposition forces fought both with each other and the regime. The U.S. supported Kurdish-led forces battling the Islamic State and eventually sent troops, Russia intervened in support of the regime with air power and mercenaries starting in 2015, and Turkey invaded portions of northern Syria in 2016, 2018, and 2019 to push Kurdish forces back from the border. Since 2015 the Syrian government has been regaining territory, with support from Iran and Russia. In 2019, the Americans shrank their military presence and moved away from the northern border. Still, hundreds of American troops remain in eastern Syria to counter remnants of the Islamic State and maintain control over oil resources, in cooperation with Kurdish-led Syrian Democratic Forces (SDF). There has been no more complex nor deadly conflict on earth since the Congo War of 1998-2003.

In much of the country, the intensity of violence has now moderated. Contiguous parts of Syria are under the control of identifiable forces. The most recent large-scale offensive took place in Aleppo and Idlib provinces, where the Syrian army pushed northwards in 2019-20 to wrest control from the remaining opposition, primarily a former al-Qaeda offshoot known as Hayat Tahrir al-Sham (HTS), aided by Turkey and allied militias. One million Syrian civilians have fled into a cul-de-sac because the Turks have closed their border. The center, including Damascus, and the west are largely under President Bashar al-Assad’s control. The south is also under Damascus’ control, with assistance from minimal Russian forces. The Turkish Army controls much of the northern border area. Other parts of the northern border and large parts of the northeast and east are more or less controlled by the SDF, with U.S. support.

Each of the different de facto authorities is trying to stabilize the situation within its areas of control, made more difficult for the past two years by the spread of COVID-19. This paper seeks to describe how they are doing in that enterprise and what the implications are for the future of Syria.

The Syrian regime seeks to reassert its authority using its pre-war autocratic instruments, the internal security services. Syrian citizens are required to obtain permission from one or more of these services for many ordinary activities like buying property, establishing a business, obtaining foreign currency, and moving from one part of the country to another. Violations can be referred either to the regular court system or to “antiterrorism” courts, where decisions are generally believed to be under security service control. Those services also run the prison system, which currently contains tens of thousands of political prisoners, many of whom are tortured and some of whom will be executed.

Key positions in the state apparatus, especially the military, are held mostly by Alawites, adherents of a heterodox sect affiliated to Shiism to which President Assad belongs. But the Shiites and Alawites are relatively few, so the regime also relies on a network of mostly Sunni businessmen, who are rewarded for loyalty with state contracts and concessions. Elections are used to confirm those in power, not for political competition. Opposition exists only nominally. Serious opponents of the regime are jailed or forced to depart regime-controlled territory. The economic situation is dire with rapid inflation, devaluation of the Syrian pound, and dramatic shortfalls in government revenue. A major source of income for the regime and its allies has been the production and export of illegal drugs, notably hashish and the amphetamine Captagon.

Turkish stabilization efforts vary across the territories Ankara controls along the northern border of Syria. Ankara regards the U.S.-allied Syrian Kurdish forces concentrated there as terrorists. The Turkish security forces and allied Arab proxy forces have forced large numbers of Kurds out of both Afrin in the west and formerly Kurdish areas along the border in the east. Ankara seeks to repopulate these areas with Turkmen and Arabs, including Syrian refugees who have spent years inside Turkey. In addition, Kurdish forces are conducting a low-level insurgency against the Turks.

Civilian governance and reconstruction in Turkish-controlled areas of Syria is primarily the responsibility of the governors of neighboring Turkish provinces. However, some Arab-populated parts of the Turkish-controlled territory are stable enough to permit reconstruction as well as limited local self-governance. The legal framework used is Syrian, but Turkish currency and language are increasingly prevalent.

The northwestern corner of Idlib Province, contiguous with Turkey’s border, is the last enclave of the traditional opposition to Assad’s rule. It hosts dozens of primarily Islamic armed groups, of which HTS is dominant. The small area is home to millions of inhabitants, most of whom are IDPs who fled there or were relocated through “reconciliation” deals with the Assad regime. Faced with a closed Turkish border and a Syrian-Russian siege, Idlib has earned the appellation “new Gaza.” HTS relies on Turkey for military support and most of its trade, but their working relationship is troubled.

Governance in Idlib is administered through the Syrian Salvation Government (SSG), which maintains HTS dominance through authoritarian means and applies an idiosyncratic version of Sharia law. Reports of disappearances, torture and secret prisons are widespread. HTS has attempted to downplay its authoritarian and Islamist character in an unsuccessful appeal for Western support. Large numbers of IDPs, Russian and Syrian attacks that target civilian infrastructure, and high inflation of both the Syrian and Turkish currencies have led to economic collapse and dire humanitarian conditions.

Much of agriculturally productive eastern Syria is controlled by the SDF, who are Kurdish-led but include substantial Arab troops as well. Like the regime and the Turks, internal security forces maintain the SDF monopoly on violence and repress resistance. The SDF faces serious opposition not only from the regime but also from the Turkish Army and the Islamic State, which has lost its territorial caliphate in the east but continues to conduct insurgency operations there. SDF governing structures are financed in part by oil produced in the east and smuggled to regime-controlled refining facilities.

SDF governance structures are distinct from those of the regime and the Turks. Their “autonomous administration” is based on the egalitarian, bottom-up philosophy of Abdullah Ocalan, who is in prison in Turkey. Women play a far stronger role than elsewhere in the Middle East, including in the Kurdish security forces. Local neighborhood councils are the basis of governance, which are aggregated by stages of cooptation to larger geographic units. This allows for more free expression than elsewhere in Syria and, in theory, more opposition. In practice, the Ocalanist Democratic Union Party (PYD) remains dominant, especially in Kurdish-populated areas.

What does this mean for the future of Syria?

This patchwork of stabilization efforts in Syria necessarily makes some doubt that the country can be put back together again. The Turks have not clarified their intentions with respect to the territory they control. Nor have they declared an occupation, which entails obligations under the fourth Geneva Convention. In theory, the Turks could hand back their holdings to Damascus with relatively little change in the draconian style of governance. But the population of the Turkish-controlled areas prefers Ankara to Damascus. Virtually no one has fled south. Especially in Idlib, where Assad sent irreconcilables from other parts of Syria, it is hard to picture ready acceptance of a return to Damascus’ authority.

Unlike their Iraqi compatriots, the Syrian Kurds have not sought independence but rather autonomy within the Syrian state. But their bottom-up, egalitarian governance is incompatible with Assad’s top-down autocracy exercised by a privileged group of co-religionists, albeit with ample Sunni support. Assad used PYD-affiliated forces in the past to harass Turkey. But to resume that role, the Kurds would want in return more autonomy than Assad would be willing to give.

If reunification under Assad looks unworkable, a formal breakup of Syria looks unappealing. Assad has vowed to retake every inch of the country. No one any longer imagines that the parts of Syria in opposition control in Idlib and Aleppo provinces could survive as an independent state. The Syrian Kurds have not sought one. None of Syria’s neighbors would favor its breakup: Turkey for fear of a Kurdish state on its southern border, Iraq because of the precedent that would set for Iraqi Kurdistan, Jordan because it has enough trouble already, and Lebanon for fear of absorption into a rump Alawite/Shi'a Syria. Even Israel, which has been attacking arms shipments to Hezbollah passing through Syria, would not want to risk Sunni or Shi'a extremist takeover of the Syrian side of the border.

The concerned great powers will also be opposed. Russia and Iran want their ally whole again. The Europeans fear a new wave of refugees if the Syrian state collapses. The Chinese want stability that could allow profitable reconstruction. The Americans are comfortable with their fiefdom in the east, which has the virtue of sitting astride Iran’s land route through Iraq and Syria to Lebanon.

Unless one or the other force risks a major new offensive, the current situation is likely to continue. Undefeated, Assad enjoys political and economic normalization with Arab states that once sought his downfall. He is militarily and economically constrained from pushing north, as is Turkey from pushing south. The risks of either move would be substantial. The SDF is unable to recover territory from Turkey. The Americans, Russians, Israelis, and Iranians accept the current stalemate. For lack of better, Syria will continue to suffer.

Daniel Serwer is a professor at the Johns Hopkins School of Advanced International Studies (SAIS) and a non-resident scholar at the Middle East Institute. He tweets @DanielSerwer and blogs at www.peacefare.net.

Koen van Wijk is a research assistant at SAIS and MEI and holds MAs in Middle Eastern studies and international relations from Leiden University. The views expressed in this piece are their own.

This paper was originally published in the spring 2022 issue of the Journal of Middle Eastern Politics and Policy.

Syria’s eastern factions unite in the Liberation and Construction Movement: A conversation with the leadership