A dream scenario for ISIS in northeastern Syria 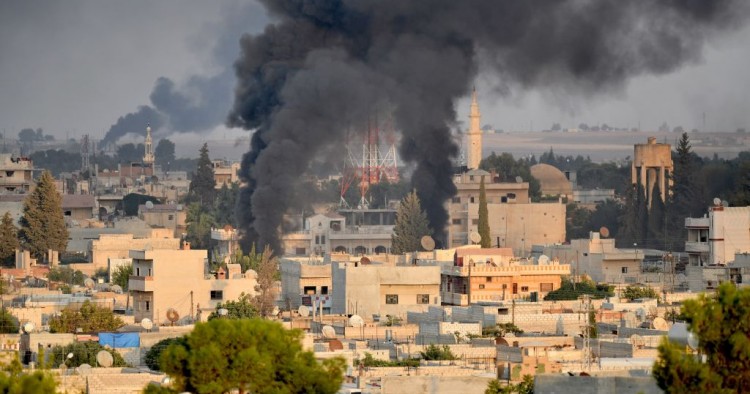 Turkey’s cross-border incursion into northeastern Syria has stirred up a hornet’s nest of instability and threats. If left unchecked, this latest “war within a war” will have deeply destabilizing consequences for many years. The blame for this catastrophe lies in the hands of one man: President Donald Trump. Following a phone call with Turkish President Recep Tayyip Erdogan on Oct. 6, President Trump swiftly ordered nearly 100 American troops to evacuate their positions along the Syrian-Turkish border, thereby removing the only obstacle that had, until then, prevented Turkey from crossing to attack. Although the president may not have given a verbal “green light,” his decision could only have been read one way in Ankara.

The prospect of a potentially intractable Turkish-Kurdish and opposition-Kurdish war in northeastern Syria is a dream scenario for a weakened ISIS, whose remaining forces already looked to be engaged in a slow recovery. To date, over 11,000 ISIS prisoners remain in makeshift detention facilities in Syrian Democratic Forces (SDF) territory, approximately 15% of whom reside within the zone being targeted by Turkey. Already, at least five ISIS prisoners escaped from an SDF prison near Qamishli amid alleged Turkish shelling. But beyond the troubling detainee issue, the prospect of debilitating chaos is deeply concerning as well, as it is precisely the kind of environment in which ISIS thrives. This also represents a strategic victory for the Assad regime, Russia, and Iran, which stand to benefit from the chaos and the inevitable weakening of Turkey and the SDF. At some point in the future, both will have to negotiate their own deals with Damascus as well.

What makes this situation so frustrating is the fact that senior State and Defense department officials had spent an enormous amount of time and energy for many months negotiating the impossible: a “security mechanism” that sought to meet American, SDF, and Turkish interests. That mechanism was agreed in August and it was working. The source of Turkey’s security concerns, the Kurdish People’s Protection Units (YPG), had withdrawn their forces from the border and were destroying their defensive positions there too. American and Turkish generals were sharing helicopters on patrol over border territories and for the first time in years, Turkish jets were flying independently over northeastern Syria, also on patrol. The security mechanism was far from perfect and it would have faced many challenges, but it was a great deal better than the chaos we’re now watching play out.

As hard as the Defense Department might try to argue we haven’t “abandoned” the Kurds, that is precisely how I would feel if I were an SDF commander now facing the jets, helicopters, artillery, and guns of the second-largest army in NATO while holding my AK-47. Neither President Trump nor any arm of the U.S. government has declared a withdrawal from Syria, but recent decisions and their consequences make that an inevitable eventuality. It is impossible to imagine how an effective relationship with the SDF can continue after American troops literally opened the door to the SDF’s mortal enemy — a force they are simply not equipped to fight. The clock is now ticking.

President Trump’s decision to submit to Turkish intimidation is also frustrating for the damage it does to the “by-with-and-through” strategy, whose employment in Syria had brought substantial success at very minimal cost. With 2,000-2,500 troops at its height, the U.S. counter-ISIS campaign in Syria had trained and equipped nearly 100,000 militiamen to lead an ultimately victorious campaign that entirely defeated ISIS’s territory. At a time when American and European politicians and ordinary citizens are almost unanimously opposed to any military engagements abroad — and particularly in the Middle East — achieving such success at low cost seemed to be an invaluable solution.

But while President Trump deserves the scathing and bipartisan criticism he is receiving in Washington and in Europe, a good deal of blame also lies with the Obama administration, which chose to partner with a four-decade-old enemy of a NATO member — even if a troublesome one. By itself, that decision sparked significant problems, but the Obama administration’s consistent refusal to seriously acknowledge Turkey’s concerns and to dedicate appropriate energy to negotiating mutually beneficial security arrangements meant trouble was guaranteed. The security mechanism negotiated recently under Special Envoy James Jeffrey’s watch should have been considered years ago. Whatever one thinks of Turkey’s security concerns about the YPG, dismissing them altogether made no strategic sense.

For now, the U.S. is likely to reconsolidate its positions in the interior of northeastern and eastern Syria, remaining focused on confronting the ISIS threat and securing the Euphrates River from any possible regime attack. But to sustain that, serious diplomacy will be required to keep the SDF on board and to prevent them from seeking other allies. At least in the interim, it remains unlikely that the Assad regime will seriously engage in meaningful talks, but Russia almost certainly would be glad to gradually drag the SDF away from America’s orbit. During the security mechanism negotiations earlier this year, U.S. officials used to describe the SDF as “never more vulnerable than now.” That has changed dramatically in recent days and whether that increased vulnerability will play into American interests or not remains to be seen.

Beyond Syria-specific details, the latest developments emanating from Washington illustrate the magnitude — and consequences — of a crippling crisis at the heart of the U.S. government. President Trump’s willingness to take momentous decisions without consulting his advisors and subject matter experts has damaged America’s standing in the world, and in particular, with its allies. European officials increasingly tell me they simply do not trust the Trump administration enough to enter into any meaningful arrangements with the U.S. government. Other developments in the Middle East in recent months — especially those relating to Iran — have deepened that distrust. Traditional American allies should be wary of relying too heavily on the Trump administration, if the disintegration of its Syria policy and betrayal of its allies is anything to go by.