The economic backdrop of Iran’s protests 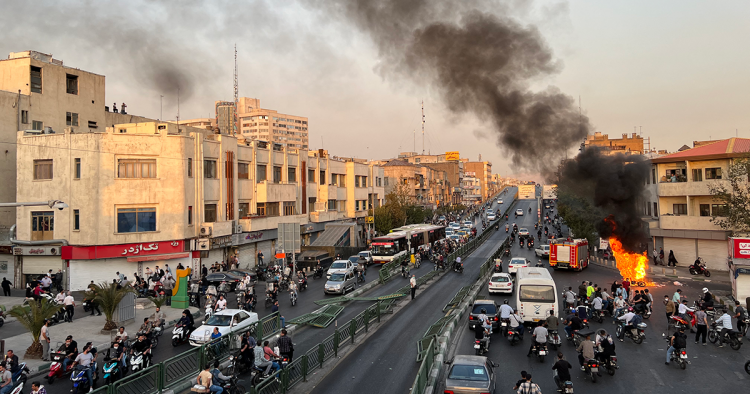 Iran’s ongoing protests were sparked by the death of a 22-year-old woman, Mahsa Amini, in a hospital in Tehran one month ago after she was detained by the so-called “morality police” (Gasht-e Ershad) for allegedly wearing her headscarf incorrectly. The government failed to silence the news of Amini’s death on Sept. 16, like the stories of other victims of brutality at the hands of the morality police, and it caused Iranian society to explode. Today’s popular unrest is unique. Since 2017 there has been at least one major protest a year, but rarely have the protests lasted so long, had such a wide geographic scope, and drawn such a sizeable social base. The main difference between the current protests and the ones that came before are the protesters’ demands. They have clearly moved on from their previous, largely economic grievances and the idea of pursuing change from within the existing system. Instead, their demands are now for a political transition, including the dismantling of the regime. Nonetheless, Iran’s chronic economic problems are a notable backdrop that, for years, built up social anger and resentment, creating fertile conditions for the present crisis. The protesters’ actions over the past month suggest another qualitative change as well: a deep crisis of legitimacy on the part of the regime. If the country’s authorities manage to survive the current upheaval, as still seems likely, it will prove extremely difficult to ever regain the trust of the population.

As protesters’ slogans and chants have made clear, the current protests are definitely not about the economy, but about opposition to the regime more broadly and its political and social oppression. Yet Iran’s economic problems have created an atmosphere that encouraged and fueled protesters’ anger and have done nothing to help the regime (see Table 1). In 2022, the inflation rate exceeded 50% and the lower strata of Iranian society was the most exposed to its negative effects. Prices continued to increase steadily while household purchasing power fell and the GDP growth rate slowed; that the economy did not contract was largely due to high oil prices. The steps the government has taken to deal with the economic challenges facing the country have been insufficient. At first, the new president, Ebrahim Raisi, could not assemble an economic team of like-minded people in his government. The contradictions that arose among them only complicated the introduction of necessary measures; and when Raisi finally adopted an economic reform plan, it had a number of critical shortcomings. The abolition of the special dollar exchange rate, which was used for the import of essential goods (including food), inevitably spurred consumer price growth for imported goods, although it did eliminate another source of corruption and wasted money. The decision to restructure direct subsidy payments helped to ease the associated budget burden in the long run, but it also accelerated the rate of inflation and no alternative mechanism to contain it was proposed. On the contrary, the government has been steadily reducing the volume of bonds issued in the absence of demand and private investment in the Iranian economy has declined amid broader popular distrust of the government’s economic policies; in a normal situation both could help to absorb excess liquidity. The banking sector has also found itself in a difficult situation: According to Iranian economists, high rates of inflation and depreciation of incomes have spurred small businesses to take on additional loans, while banks either refuse to provide financial support or offer it at extremely high interest rates.

More broadly, the “resistance economy” model promoted by the Iranian leadership seems to be unsustainable in the long run without major changes. It was able to stabilize the situation after the initial shock from the imposition of sanctions in 2010-12 and 2018, but it cannot address their impact on the very foundation of the Iranian economy, such as its ability to develop a production base, attract foreign investments, use long-term foreign bank loans, and enter new markets. Meanwhile, the deterioration of Iran’s production base will inevitably become the main obstacle to the country’s economic development and budget stability.

In a sense, President Raisi was also unlucky: He was elected when the negative impact of sanctions on Iran’s economic foundation became most acutely felt. Since 2019, production by many of Iran’s industries, including automobile manufacturers and food and textile producers, has continued to contract steadily. These trends, in turn, have been directly reflected in the country’s foreign trade: The volume of Iranian exports is declining in terms of both value and weight, while the trade balance (excluding oil and gas) is steadily growing negative. To cope with these challenges, the leadership in Tehran will have to solve structural economic problems caused by the specifics of the Iranian economy and aggravated by the sanctions imposed by the U.S. and its allies.

The failure of Iran’s leadership to transform even slow economic growth into social development is another long-term structural challenge. Since the mid-2010s the purchasing power and incomes of Iranian households have fallen steadily. Moreover, expenditures on basic necessities, including food, were reduced in favor of housing payments (see Table 2). By 2022, 18.4% of the population in Iran lived in absolute poverty, while an estimated 60% were either at or below the poverty line.

It is also not surprising that young women are the face of the current protests, as they represent the two most vulnerable groups in Iranian society. According to estimates from Iranian economists, the unemployment rate among women is 13%, while for men it is around half that (7.2%). These figures are roughly double among young people aged 18 to 35. According to other sources, the share of people who are unemployed among those aged 15 to 24 reaches as high as 77% (7.1 million). There is also a gender disparity in employment, with just one in five women participating in the economy.

Shutting off the safety valve

And yet, by itself, the worsening economic situation was not enough to spark such unprecedented protests. Iran has faced rapidly rising prices before, and they did not always lead to mass protests affecting the whole country. Since late 2017, there have been a number of minor protests reflecting mostly the economic — and rarely the political — grievances of the local population. Negative social indicators are not a new problem either: High unemployment and social stratification have been issues in Iranian society for the past few decades. Iran’s economic woes only helped to set the stage for the current protests, while political factors were the real catalyst, as the Iranian people lose the faith in the very idea of the Islamic Republic.

The historically low turnout at the de facto staged 2021 presidential elections, when the number of invalid ballots was greater than the total votes won by any candidate other than Raisi, was the first warning sign to the Iranian political system. People did not accept the government’s decision to clear the electoral landscape to ensure Raisi’s victory by disqualifying other popular candidates and depriving the electorate of its right to choose. The Raisi administration’s failed socio-economic policies over the past year only aggravated things, destroying any illusions among those who still believed in the conservative camp’s ability to improve the situation. Meanwhile, the failure of his predecessors from other camps to do the same raised a legitimate question about whether there are any forces within the current political system capable of doing so.

The straw that broke the camel’s back was Raisi’s decision to crack down and deprive the Iranian population of any leeway in areas such as non-compliance with the requirements for women to wear a headscarf and the right to “guilty pleasures” like hosting loud house parties, holding musical evenings in restaurants, and consuming drugs and alcohol (even if officially forbidden). This was a part of an unspoken agreement between the people and the government: The population suffered economic hardships, in return for having the right to ignore a number of the rules. Under the conservative Raisi, however, this agreement, which served as something of a safety valve, was broken — and with it so too was the people’s patience.

So far, the intensity of the protests suggests that Tehran will not be able to simply suppress them. Even if they can be temporarily quelled, sooner or later the Iranian political system will have to make changes. Moreover, the breadth and depth of the discontent in Iranian society means the political system will not be able to get away with minor reforms in the economic or political sphere. To have any chance of regaining trust, the changes will have to be deep and wide-ranging, affecting all aspects of life in Iran.

Nikolay Kozhanov is a research associate professor at the Gulf Studies Center of Qatar University and a non-resident scholar with MEI’s Program on Economics and Energy.