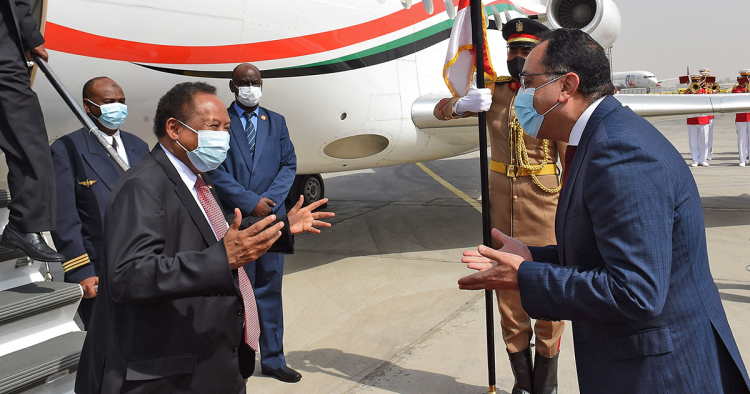 Egypt, Ethiopia, and Sudan are caught in a dangerous deadlock over the Nile River and despite what the international community seems to think, the risk of military confrontation among the three nations is not at all far-fetched. Addis Ababa began the second phase of filling the reservoir behind its giant Grand Ethiopian Renaissance Dam (GERD) in early May without an agreement with the riparian nations — Egypt and Sudan. However, much has changed over the past year and the second filling has played out rather differently from the first last July. In the intervening months Egypt has ramped up its diplomatic outreach and emerged as an influential player in the Nile Basin, the Horn of Africa, and East and Central Africa. Cairo succeeded in forging strategic alignment with Khartoum to exert diplomatic pressure on Addis Ababa, forming webs of alliances with different regional powers across East and Central Africa and the Horn of Africa to project power and influence, and exerting geopolitical forward pressure on Ethiopia in parallel with the diplomatic track to solve the GERD dispute.

For 10 years, Egypt, Ethiopia, and Sudan have been negotiating an agreement on the GERD. Upon its completion, the largest dam in Africa will generate 6.45 gigawatts of electricity that would help Ethiopia to power its economic development. However, the downstream states, Egypt and Sudan, are anxious that the absence of a legally binding agreement on the GERD would alter the status of the Nile as an international waterway, in addition to fears of a man-made drought. Cairo is specifically worried about the coming loss of water share from the Nile, which provides Egypt with 90% of its water. In addition to the uncertainties surrounding the water flow, Khartoum is worried about the damage the GERD could do to Sudanese dams and water management.

In 2015, Cairo, Khartoum, and Addis Ababa signed the declaration of principles, under which Egypt and Sudan committed to the Ethiopian right of development, and the three countries agreed to finalize an agreement before the first filling of the GERD in 2020. However, in 2020, Ethiopia started to fill the dam reservoir without reaching a legally binding agreement with Egypt and Sudan. Thus, this first filling of the GERD underscored a dark reality for Egypt: Beyond direct diplomacy and negotiations, Cairo lacked influence in East and Central Africa and the Horn of Africa to help reach a legally binding agreement with Sudan and Ethiopia. Since the first filling, Egypt has developed a Nile strategy centered around strategic alignment with Sudan; military and security pacts with Uganda, Kenya, and Burundi; and growing diplomatic and economic ties with Djibouti, Tanzania, Zambia, and South Sudan.

Under former President Omar al-Bashir, the cold relations between Cairo and Khartoum hampered coordination between Egypt and Sudan on policy issues, including the GERD. After the downfall of al-Bashir's government in 2019, the new transitional government in Khartoum didn't align with Cairo's position on the Nile talks. However, Khartoum's calculations on the Nile tilted toward Egypt following Ethiopia's first filling of the GERD in 2020, the Ethiopia-Sudan border tensions in al-Fashqa, and Egypt's political and economic support for Sudan — marking a new era of strategic alignment between Cairo and Khartoum. Egypt and Sudan jointly conducted two air exercises, "Nile Eagles-1" in November 2020 and "Nile Eagles-2" in March 2021. The two air exercises focused on storming, concealment, camouflage operations, unifying military concepts, managing joint air operations, carrying out special operations, and using different shooting positions. In addition, Cairo and Khartoum intensified their military cooperation with the "Guardians of the Nile" joint military drill, carried out from May 26 to 31, with the participation of the two countries' naval, land, and air forces. According to the Sudanese army, the joint drill was designed to "exchange military expertise, strengthen unilateral cooperation, and unify working methods to address the anticipated threats preying on the two countries." During the recent border escalation between Ethiopia and Sudan, Cairo stressed its support for Khartoum's right to expel Ethiopian forces from Sudan's al-Fashqa region. Egypt also provided Sudan's military with dredging and engineering equipment.

The strategic alignment between Sudan and Egypt hasn't been limited to military cooperation but has expanded significantly to include economic cooperation as well. Egypt utilized its geoeconomic muscle to cement its relations with Sudan. Egypt and Sudan agreed to construct a $1.19 billion cross-border railway between the two countries to transport goods and passengers. In addition, Egypt agreed to build a joint industrial zone in Khartoum to boost the industrial and commercial integration between the countries. To cement its commitment to and support of the political transition in Sudan, President Abdel-Fattah el-Sisi participated in the International Conference on Sudan in Paris in mid-May. Egypt pledged to help with Sudan's debt relief by "using Egypt's share in the International Monetary Fund to address doubtful debts."

The new military and economic alignment between Cairo and Khartoum was reflected in their synchronized rejection of Ethiopia's unilateral second filling of the dam in 2021. Sudan took a much harsher stance on the Nile dispute than ever before. In April, Khartoum drastically changed its tone and told Ethiopia directly that disavowing the Nile water agreements would compromise Ethiopia’s sovereignty over the Benishangul region, where the GERD is located. Sudan said that, "Ethiopia's claim that the Nile agreements are an inconsequential colonial legacy is a fallacy of historical facts, indicating that Ethiopia was an independent sovereign state at the time of the conclusion of those agreements, while Sudan was subject to colonialism." Sudan was referring to the Anglo-Ethiopian treaty signed in 1902 between Great Britain — representing Egypt and Sudan — and Ethiopia — represented by Emperor Menelik II of Abyssinia. The agreement prohibited Ethiopia from constructing any waterworks across the Blue Nile that would affect the river's natural flow to riparian nations; in return, Great Britain granted sovereignty of the then-Sudanese Benishangul region to Ethiopia.

In March, Burundi's president, Evariste Ndayishimiye, visited Cairo to discuss bilateral relations and the Nile dispute. Following his visit, the chief of staff of Burundi's armed forces, Prime Niyongabo, flew to Cairo to conduct the first Egyptian-Burundian Military Committee with his Egyptian counterpart, Gen. Mohamed Farid, to promote bilateral military cooperation. The committee’s meeting resulted in a military cooperation agreement with Burundi. In April, and following the collapse of the Democratic Republic of the Congo-mediated GERD negotiations, an Egyptian military intelligence delegation flew to Kampala to sign a military intelligence-sharing agreement with Uganda. Maj. Gen. Sameh Saber el-Degwi, who headed Egypt's delegation to Uganda, said, "Uganda and Egypt share the Nile, and cooperation between them is inevitable since what affects Ugandans will affect Egypt in one way or another."

Egypt also signed a military cooperation agreement with the Democratic Republic of the Congo during the visit of Egypt's army chief of staff, Gen. Farid, to Kinshasa in June. Cairo has taken steps subsequently to deepen joint military and security cooperation with Kinshasa, in addition to providing technical and operational assistance to the Congolese military.

The big prize for Egypt in East Africa is Kenya because of its geostrategic weight in the region and its water dispute with Ethiopia. Cairo spent years developing its relations with Nairobi. In 2019, following Kenyan Foreign Minister Monica Juma’s visit to Egypt, Cairo backed Kenya's U.N. Security Council membership. In late April, Egyptian Foreign Minister Sameh Choukry met with Kenyan President Uhuru Kenyatta to discuss the GERD issue and signal Egypt's support for development projects in Kenya. The peak of Kenyan-Egyptian relations came in May with the signing of a defense cooperation pact.

In South Sudan, Cairo enjoys strong political relations with Juba. In 2020, President Sisi paid a historic visit to South Sudan’s capital, where he laid out his vision for a strategic partnership between Cairo and Juba, and stressed Egypt’s support for South Sudan’s economic development. On June 23, Egypt’s minister of irrigation and water resources, Mohamed Abdel Aty, inaugurated a water treatment plant built by Egypt in South Sudan's Lemon Mountain. Egypt is also in advanced talks with Sudan over the construction of the Wau Dam, a multi-purpose dam on the Siwi River.

The Horn of Africa is integral to Egypt's interests in the Nile Basin and the Red Sea. However, Egypt remained distant from the region under former President Hosni Mubarak and throughout the political instability of the 2010s. Unsurprisingly, the strategic importance of the Horn of Africa has drawn many other regional powers, including Turkey, Qatar, the UAE, and Saudi Arabia. Moreover, since Eritrea and Ethiopia are in strategic alignment, Cairo now looks to Djibouti as a potential partner, primarily since it has provided landlocked Ethiopia with its main maritime harbor for imports and exports since the 1990s. In the first official visit of an Egyptian president to Djibouti since its independence in 1977, President Sisi travelled there at the end of May and met with President Omar Guelleh to discuss the GERD dispute, Red Sea security, and bilateral relations. Additionally, Sisi wants to leverage Egypt's geoeconomic muscle to strengthen ties with Djibouti following years of cold relations under former President Mubarak. Sisi aims to increase Egyptian investments in Djibouti's infrastructure and the first major project to this end is to establish an Egyptian logistical zone.

In 2021, Cairo emerged as a very active and influential player in the Nile Basin, the Horn of Africa, and Central and East Africa after years of absence under Mubarak and throughout the political instability of the 2010s. Amid the growing tensions over the GERD, Cairo developed a Nile strategy that is centered around full alignment with Sudan and the development of a web of economic and military alliances in Central and East Africa and the Horn of Africa. These provide Cairo with the ability to maintain geopolitical forward pressure and project power and influence in the Nile Basin in parallel with its pursuit of the diplomatic track to reach a binding agreement with Ethiopia over the GERD.