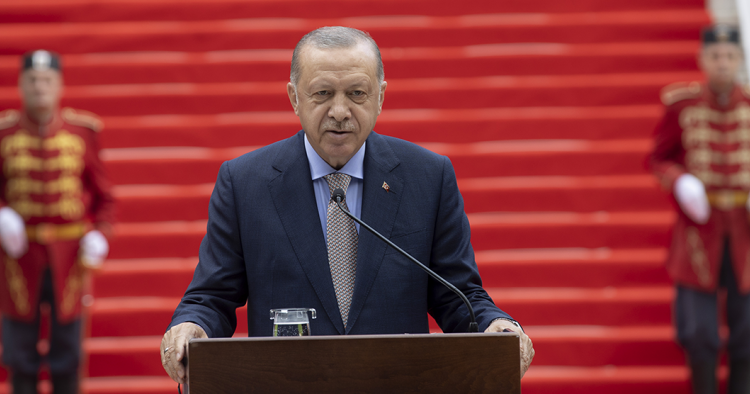 Just before visiting Turkish-occupied Northern Cyprus in late July, Turkish President Recep Tayyip Erdoğan gave Serbia an unpleasant surprise. He announced that Turkey would lobby to increase the number of countries that recognized independent Kosovo. Erdoğan stated on July 19, “Now 114 countries recognize Kosovo, and we want that number to increase. We hope that this year at the United Nations General Assembly, at the meeting I will have with [U.S. President Joe] Biden, we will discuss this topic again, that we will work together on the recognition of Kosovo.” Serbian President Aleksandar Vučić reacted: “Turkey is a great power, Erdoğan is great, I am small and negligible, but Serbia is not so small that it would not attempt to stand up to that.”

Evidently, Erdoğan was not all talk. Kosovo’s minister of defense, Armend Mehaj, recently attended a dinner organized and hosted by the Turkish defense minister, Hulusi Akar, alongside his counterparts from Ukraine, Georgia, Azerbaijan, and Libya. Mehaj urged Ukraine, Georgia, and Azerbaijan to recognize Kosovo. Turkey’s latest diplomatic maneuvers in the Balkans are in part driven by its displeasure with some of the latest Serbian policies, with Erdoğan seeing an opportunity to increase his influence in the Balkans, but they are also driven by the country’s wider geopolitical considerations concerning its ties with the U.S. and Ankara’s Cyprus policy.

Although the relationship between Serbia and Turkey has reached unprecedented levels of cooperation in recent years, some Serbian policies over the past year were almost certainly displeasing for Erdoğan. During the latest flare-up in the conflict between Armenia and Turkey’s close ally Azerbaijan, Serbia delivered ammunition, mortars, and high-caliber ordnance to Armenia. Serbian engagement with Turkey’s Middle Eastern rivals may also have annoyed Ankara. Under the mediation of then-U.S. President Donald Trump, Serbia and Kosovo agreed in 2020 to open embassies in Jerusalem. Subsequently, Vučić travelled to Istanbul to mend ties with Erdoğan. It is also becoming increasingly difficult for Serbia to balance its relationship with Turkey with that with Turkey’s adversary, the UAE. Indeed, while Mohammed Dahlan — the exiled Palestinian former Gaza spy chief who acted as a facilitator of the UAE-Serbia partnership — enjoys VIP treatment in Serbia, in Turkey he is wanted for his alleged involvement in the failed coup in July 2016. In June, the University of Belgrade awarded an honorary doctorate to the president of Egypt, Abdel-Fattah el-Sisi, for his contribution to regional and global security. Although Turkey has been attempting to repair ties with the UAE and Egypt of late, Serbia’s overtures to Arab regimes that have had a problematic recent relationship with Turkey displeased Erdoğan.

The last straw for the Turkish leader was Serbian defense cooperation with Cyprus, although this in itself cannot alter the military balance in the eastern Mediterranean. Two years ago, Cyprus bought 24 B-52 Nora howitzers and eight Miloš 4x4 armored multi-purpose combat vehicles from Serbia, and Nicosia paraded this weaponry during the 2019 anniversary of Cypriot independence. Talks about additional weapons purchases are ongoing, and Serbia is interested in buying 11 Mi-35P attack helicopters from Cyprus. On top of all of this, in southwestern Serbia, in the Muslim and Bosniak-populated region of Sandžak, where Erdoğan is admired as a rock star, a political and religious faction led by former Grand Mufti Muamer Zukorlić, and one most critical of Turkey, is currently growing in popularity. Zukorlić is much closer to Saudi Arabia and the Gulf countries, and he operates with direct support from the government in Belgrade. The fact that relations between Ankara and Belgrade are no longer carefree became evident during Erdoğan’s recent Balkan tour. Erdoğan visited Bosnia and Montenegro, but bypassed Serbia despite his traditional insistence on its strategic importance in the region.

The regional context is important. Due to Erdoğan’s hunt for the followers of his arch-nemesis, exiled Turkish cleric Fethullah Gülen, there has been discomfort in Turkey’s relationships with both Albania and Kosovo in the last few years despite the warm political façade. This period also saw an upswing in Serbo-Turkish relations, starting with Erdoğan’s landmark visit to Serbia in 2017. In the meantime, the old Albanian political class in Kosovo has been replaced by the new government of Albin Kurti. With the departure from Kosovan politics — due to his indictment for war crimes — of the former Kosovan president and Erdoğan’s personal friend Hashim Thaçi, the Turkish president needs to re-establish Ankara’s political sway among Kosovo Albanians. Erdoğan also recognizes that EU-facilitated normalization talks between Serbia and Kosovo are not producing results, creating an opportunity for new initiatives.

As part of the Trump-brokered 2020 deal, Serbia agreed to put a one-year moratorium on its diplomatic campaign to persuade other countries to revoke their recognition of Kosovo, while Kosovo agreed to do the same regarding its campaign to join international institutions. This moratorium expires at the beginning of September. Although Turkey has never ceased being a leading proponent of Kosovo’s statehood, its diplomatic efforts have been toned down since the recognition/non-recognition camps in the U.N. were more or less consolidated. However, the expiration of the moratorium, alongside the formation of a new government in Kosovo and the continued failure of EU-facilitated talks, are motivating Ankara to make its move by pushing for further international recognition of Kosovo. In doing so, Turkey can increase its influence among Albanians and its leverage with the Serbs, putting Erdoğan in the role of diplomatic balancer between two of the largest ethnic groups in the western Balkans, Serbs and Albanians.

Building a cooperative agenda with Washington

Erdoğan did not just mention that he intended to wage a new campaign to increase the number of countries recognizing Kosovo’s statehood. He added that he would talk about the matter with Biden, during their upcoming meeting on the sidelines of the U.N. General Assembly high-level meetings, so that the two countries could “carry out joint work” to advance the common cause. Here probably lies the main motivation for Turkey’s renewed interest in consolidating Kosovo’s statehood: Erdoğan desperately needs to build an agenda that enables the U.S. and Turkey to work together to offset their differences over other matters. Erdoğan hopes for a grand bargain between the two countries that would see Turkey’s positive role on issues such as Afghanistan, Kosovo, and Ukraine convince the U.S. to seek compromise over thorny issues such as Turkey’s purchase of the Russian S-400 missile system and the Halkbank affair. In this context, Kosovo’s universal recognition represents a relatively easy issue on which to achieve policy coordination between the two countries.

The U.S. factor may have influenced Erdoğan’s decision for another reason. While Turkish-Kosovo relations are very close, they are no match for U.S.-Kosovo relations. It is no exaggeration to say that the limits of Turkey’s influence over Kosovo are to some extent set by the U.S. This was demonstrated earlier this year when Priština moved to open its embassy in Jerusalem in defiance of the EU and Erdoğan’s personal pressure on Kosovan authorities. Therefore, Turkey’s influence in Kosovo would be even greater if its relevant initiatives are considered in coordination with U.S. policies.

Cyprus and the international community

Last but not least, one cannot help but notice that Erdoğan made this statement a few hours before going on a much-advertised visit to the Turkish army-occupied Northern Cyprus. During that visit he announced the partial re-opening of Varosha — a town that has been abandoned by its residents and fenced off since the 1974 Turkish invasion of the island — in defiance of U.N. Security Council resolutions. With that fait accompli, Erdoğan strove to advance his “two-states solution” to the Cyprus question. However, his gamble did not work and, a week later, the Security Council unanimously condemned all Turkish actions in Varosha since October 2020. Moreover, all U.N. members (except Turkey) have consistently supported the unification of Cyprus as a bizonal, bicommunal federal state. Given the timing of his Kosovo statement, Erdoğan may have thought that the advancement of Priština’s recognition cause would increase the chances of establishing the self-declared Turkish Republic of North Cyprus internationally. However, it seems the international community does not see any connection between the two issues.

Turkey and Erdoğan have multiple reasons for the recent policy change on Kosovo. When Erdoğan believes that he has an opportunity to make gains, he always takes action. September is growing closer, and so too are both the end of the Serbia-Kosovo recognition moratorium and the U.N. General Assembly high-level meetings. Ankara is unlikely to remain passive.

Vuk Vuksanovic is a PhD researcher in international relations at the London School of Economics and Political Science (LSE), an associate of LSE IDEAS, LSE’s foreign policy think tank, and a researcher at the Belgrade Centre for Security Policy (BCSP).

Nikolaos Tzifakis is an associate professor of international relations at the Department of Political Science and International Relations of the University of the Peloponnese, a Research Associate of the Wilfried Martens Centre for European Studies (WMCES), and a member of Balkans in Europe Policy Advisory Group (BiEPAG). The views expressed in this piece are their own.