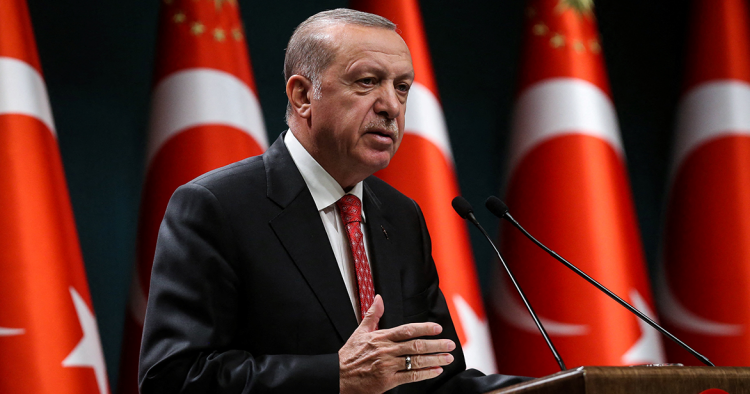 Turkish President Recep Tayyip Erdoğan is notorious for pursuing a one-man foreign policy strategy to consolidate his popularity with his nationalist voter base. Five years ago, Erdoğan resolved to transform Turkey’s parliamentary system into a highly centralized presidential system without any meaningful checks and balances. To sell his plan to Turkish voters, Erdoğan insisted that an executive presidency would solve Turkey’s economic woes, enhance its stability, and facilitate more effective decision making. He subsequently won a 2017 referendum on the issue that granted sweeping power over the country to the presidency, despite widespread allegations of irregularities in the vote. Erdoğan secured this power for himself after winning the presidential elections a year later. Since then, he has enjoyed full control over Turkey’s defense and foreign affairs. Erdoğan has utilized bold, and sometimes reckless, foreign policy as a vehicle for his political ambitions. He has launched military interventions in Libya and Syria, pressed territorial claims in the Mediterranean, and even courted Russia for a military partnership, all to rally nationalist sentiment behind his leadership. Now, Russia’s invasion of Ukraine has opened up new high-risk opportunities for Erdoğan to improve his domestic image, especially as the next Turkish presidential and parliamentary elections approach.

A Turkish invasion of northern Syria

Turkey considers the armed Kurdish presence at its border with Syria an absolute and existential threat. Ankara fears that an organized and militarized Kurdish force striving for autonomy in Syria could rally Turkey’s substantial Kurdish population and compromise Turkey’s sovereignty. Given this acute danger, a Turkish invasion of northern Syria appears inevitable — it simply boils down to a question of when. Erdoğan, with his opportunistic mindset and concerns for his political position, has calculated that the moment could be near.

On Oct. 6, 2019, President Donald Trump ordered American troops to abruptly withdraw from northeast Syria in an effort to reduce U.S. military commitments abroad — a move that was not actually fully implemented. Three days later, Turkey capitalized on the partial security void and established a 30-km “safe zone” along its border with Syria. Erdoğan’s goals were to push back Kurdish fighters that he regards as terrorists and to relocate the Syrian refugees that had flooded into Turkey throughout the Syrian civil war. Today, Erdoğan hopes that Russia’s preoccupation with Ukraine will create a similar power vacuum in northeast Syria that he can once again exploit. Russia’s invasion of Ukraine has consumed Moscow’s attention and depleted its resources, creating the impression that Syria has become less of a priority. This perception of a shrinking Russian presence in Syria has provided an excuse for Turkey to launch yet another military incursion into its southern neighbor. Erdoğan has renewed threats of a military campaign to “clean up” Syrian border cities and rid them of terrorists, and Turkish forces have already begun shelling countryside villages there. There is a very real possibility that Turkey may launch another invasion soon.

With Turkey’s June 2023 presidential and parliamentary elections looming, Erdoğan needs to consolidate his voting base now more than ever. Six opposition parties in Turkey have declared their commitment to unseat Erdoğan and restore parliamentary democracy by rolling back his executive presidential system. These developments have taken place as various public opinion polls show the president’s approval rating has declined and as Turkey faces a worsening economic crisis. Erdoğan’s re-election prospects are growing dimmer.

A Turkish offensive in Syria could provide the win that Erdoğan needs to save his domestic political position. The Kurdistan Workers Party’ (PKK) is a Kurdish militant group that operates in both Turkey and Syria and has engaged in an armed struggle for Kurdish autonomy against the Turkish state since 1984. A new Turkish military campaign against PKK bases across the Syrian border could bolster Erdoğan’s reputation as a victor in the fight against terrorism.

Additionally, the Turkish population appears to be losing patience with the 3.6 million Syrian refugees resident in the country. In August last year, mobs of Turkish nationals ransacked Syrian-owned businesses and homes after a Turkish teenager was stabbed to death in a fight with a group of refugees. Furthermore, a 2021 poll suggested over 70% of Turks would support any party promising the toughest action on refugees. Establishing new safe zones in northern Syria would enable Erdoğan to send many of these refugees to Syria, thus improving his standing with voters.

Finally, intervening in Syria would enable Erdoğan to shift Turkey’s national conversation away from its economic troubles and towards identity politics. A Turkish invasion of Syria directly targets two of Turkey’s most notable ethnic minorities: the Kurds and the Syrians. By othering these groups, Erdoğan can pump a populist nationalist discourse mobilizing public opinion in his favor.

Erdoğan views the international stage through a lens of opportunities. The emerging power vacuum in Syria is the next opportunity for him to pursue Turkey’s national security agenda and quash the PKK while strengthening his political position at home. A Turkish invasion would feed the increasingly nationalist fervor in Turkey that has kept Erdoğan in power for so long. Foreign policy is his instrument of choice to shore up his domestic standing and maintain his hold on power, and now that his position is under threat with the upcoming elections, Erdoğan will be sounding his trumpet as loud as he can. For Bashar al-Assad’s Syria, this means a hostile foreign power infringing on its already chaotic borders. For Russia, this means a revitalized threat against a critical regional ally. For the United States, this could mean an emboldened ISIS presence in the Middle East, since Kurdish forces in northern Syria regularly collaborate with the U.S. military to contain ISIS. Finally, for Erdoğan, this is a chance for yet another boost forward in his quest for absolute authority over his country.

Leena Khan is a research assistant at the Middle East Institute and an undergraduate student at Georgetown University. The views expressed in this piece are her own.