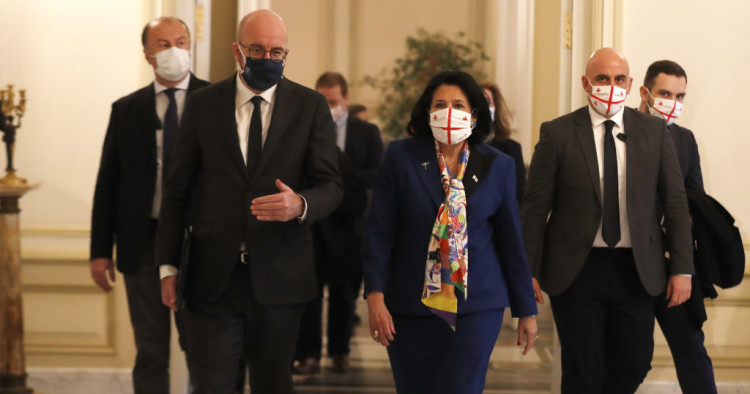 The Memorandum of Understanding signed recently by Georgia, Moldova, and Ukraine on enhanced cooperation toward European Union (EU) membership highlights both progress and overall shortcomings of the EU’s Eastern policy. Despite the Union enlarging to the East in 2004 and 2007 – and the fact that Russian aggression has long been felt on EU territory – the bloc’s Eastern policy still does not reflect realities on the ground. However, the recent buildup of Russian military in Ukraine, as well as the deployment of Russian ‘peacekeepers’ in Nagorno-Karabakh, has created momentum for an urgently needed rethink of the Union’s Eastern neighborhood policy. This in turn could pave the way for membership for Georgia, Moldova, and Ukraine.

Launched formally in 2009 with Poland and Sweden at the helm, the EU’s Eastern Partnership (EaP) was an improvised, one-size-fits-all approach to countries in the Union’s new Eastern neighborhood following enlargement. Russia refused the EU’s invitation to join the partnership.  Six countries – some democratic and others authoritarian, some Western-oriented and others Eastern-oriented – were placed indiscriminately into one EaP group, irrespective of whether they wanted to join the Union or not. This included Georgia, which had recently been invaded by Russia after expressing its desire to join NATO, and Belarus, Europe’s last dictatorship.

Five years after the EaP was launched, Georgia, Moldova, and Ukraine signed Association Agreements and Deep and Comprehensive Free Trade Agreements with the EU, offering each country access to the Union’s market and a visa free regime in exchange for sweeping reforms. Ukraine has paid the ultimate price for its Association Agreement: Russia’s invasion and illegal annexation of Crimea. Seven years on, over 13,000 lives have been lost and Kiev is still fighting the regional superpower in Donbas. Despite these agreements and progress made by Georgia, Moldova, and Ukraine, there is still no clear path toward EU membership. In theory, the Union maintains an open door policy to any country that meets its accession criteria. In reality, the bloc has remained purposefully disengaged from its Eastern neighborhood, leaving Georgia, Moldova, and Ukraine exposed to ongoing Russian aggression and occupation.

This is partially down to enlargement fatigue within the EU and other internal problems. It is also because of Russia. Some member states view the Union as an economic rather than political bloc, believing Russian aggression against European values is not a priority. Some member states’ energy dependence on Russia compels them to not provoke Russia, transforming them into Trojan horses inside the EU that veto closer ties to the three Eastern countries.

Supporters of Europe’s Eastern enlargement project are predominantly EU member states like Poland and Romania who share borders and threat perceptions with Ukraine or Moldova, and therefore a heightened sense of solidarity. But threat perceptions within the EU are shifting, leading to a growing and deliberate EU presence in its Eastern neighborhood.

A collective push by Georgia, Moldova, and Ukraine push paves the way for their membership. A humiliating visit to Russia by High Representative Josep Borrell in February quickly led to European Council President Charles Michel visiting all three countries. These visits, the latter of which saw Michel state that “there is no Europe without Ukraine,” suggest a change in the EU’s Eastern neighborhood policy in response to Russian aggression. The change is compounded by recent sanctions imposed by the EU on Russia. Furthermore, a shift in threat assessment by the Czech Republic and Bulgaria – two countries to have previously advocated for leniency toward Russia – following revelations of Russian aggression on their territory has recently added to a common European understanding of the Russian threat.

Perhaps the most significant indicator of change has been the EU’s leading role in mediating the recent political crisis in Georgia. Michel offered EU assistance during his visit to Tbilisi on March 1 and six weeks later, the Union, with active U.S. engagement, had resolved a political deadlock caused by increased domestic polarization. This achievement was unsurprising in Georgia, where a staggering 82 percent of the population support EU membership. But the mediation also shone a bright light on the Union which had until that point been somewhat absent from the region.

One major development in the EU-Georgia relationship was outlined in a joint op-ed by Michel and Georgia’s President Salome Zourabichvili: “To mark the special relationship between the EU and its Associated partners in the Eastern Partnership, we propose to hold, in the coming months, a leaders' meeting, with the Presidents of Ukraine and the Republic of Moldova.” Three days before the op-ed was published, the foreign ministers of all three countries met in Kiev to sign the MoU on pushing toward EU membership.

Indeed, cooperation between the three countries will be key to their EU membership. In previous EU expansion waves, groups of like-minded countries united together to push for the Union’s enlargement (consider Bulgaria and Romania on the Black Sea and the three former Soviet Union countries Estonia, Lithuania, and Latvia on the Baltic Sea). Georgia, Moldova, and Ukraine have a stronger voice together and a greater chance of overcoming the Union’s enlargement fatigue. The current context of Russian aggression inside and outside the Union’s borders builds momentum for their membership.

There are two immediate next steps for the EU’s Eastern enlargement. The first to divide the EaP into countries with Association Agreements in place wanting to join the Union, and countries with which the EU should pursue limited cooperation. The second step is to increase support within the Union for Georgia, Moldova, and Ukraine as a trio, and not just as individual countries within the Union. Poland has been the driver of the Union’s Eastern neighborhood policy and a vital supporter of Ukraine. Similarly, Romania has acted as an advocate for Moldova, supporting Chisinau on its EU path. Poland, Romania, and other champions of Eastern democracy must now become advocates for the trio, demonstrating solidarity in promoting their path toward membership.

Over a decade after the Union’s last Eastern enlargement, and amidst Russian aggression against European values, the Union’s Eastern policy remains out of sync with the realities on the ground. It is high time the Union’s foreign policy priorities reflected Eastern voices on both sides of the Union’s border, while reassessing the bloc’s Eastern enlargement policy to give Georgia, Moldova and Ukraine a clear path towards membership.

Iulia Joja is a senior fellow with MEI's Frontier Europe Initiative. The views expressed here are her own.