A eulogy for Iraq’s democracy 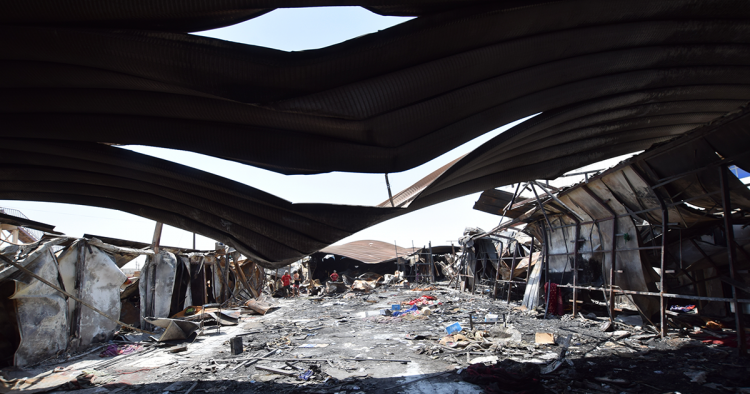 The idea for writing this piece came late last Tuesday as feelings ran high — the author’s included — amid scenes of patients’ charred bodies being pulled out from what remained of a burned-out coronavirus isolation ward in Nassiriya. It was originally meant to be a eulogy for those lost to Iraq’s stubborn corruption and chronic mismanagement, but it has since become a eulogy for democracy in Iraq.

As night fell after a day of horrific scenes of lamentation and attempts by locals to pull victims out of the ruble, the death toll stood at 92. Initial reports suggested the explosion of an oxygen tank was the culprit. Just two and a half months earlier, similar circumstances led to an explosion at a coronavirus ward at Ibn al-Khatib Hospital in Baghdad that took the lives of 82 patients. A lack of operating procedures and safety standards, as well as negligence were to blame. A government-commissioned investigation resorted to firing mid-management and was followed by the sham resignation of Iraq’s health minister. But as the fire in Nassiriya made all too clear, nothing had changed.

The collapse of the once-celebrated Iraqi health care system is a result of almost five decades of war, sanctions, and corruption. But with billions of petrodollars flowing into Baghdad’s coffers post-2003, there is little justification for its deterioration. Misdiagnoses and a lack of medicine and specialized treatment pushed many — the author’s late mother included — to desperately seek medical assistance abroad, in Lebanon, Turkey, Iran, and even as far away as India. It is no exaggeration to say that Iraqis think of hospitals in their country in the post-2003 era as mass graves. Just a month before the fire in Nassiriya, a slick “government achievements” report put progress in the health care sector at 75%.

To soften the mood and distract attention, the government finally put a name and a face to the killer of Hisham al-Hashimi, a leading Iraqi security expert shot dead last July — but without full disclosure of the gunman’s motives and affiliation. Sometimes, Iraqis are easily content and many may see a “half truth” as better than nothing. But the obviousness and absurdity of the face-saving exercise left Iraqis disappointed — a sentiment that has become more and more common with this cabinet.

Quickly, feelings of mourning turned to public anger. Iraqis throughout the country grieved as they watched a man recognize a charred corpse and scream “this is my mother!” and social media reacted to the story of a family that lost seven of its members in the fire. Youth unemployment, inadequate public services, and endemic corruption have made Nassiriya fertile ground for activism against the Shi’a ruling class. The central government’s approach was to appoint a military general at one point as governor — a move that, if anything, was reminiscent of Saddam Hussein’s methodological tactics of repression against what his regime called the “mob” southerners. On Tuesday night, fuming Nassiriya youngsters were chanting “revolution ya Ali!” in reference to the most adored figure in Shi’a Islam — one historically associated with justice.

Shi’aism thrives on victimhood. In the past it was easy to associate Saddam with Yazid I and the Shi’a of Iraq with Husayn ibn Ali, who the former had massacred along with his companions at Karbala in 680 CE. But the formula fails when the tables are turned and the Shi’a of Iraq see their own rulers as the Yazids of their time. To that end, and less than three months before the upcoming early parliamentary elections, the leaders of warring Shi’a political factions have a new air of contrition and apology, simultaneously coupled with shameless finger pointing at each other for the failures of Iraq’s skeleton of a state.

At best, this is a despondent attempt at winning the masses. At worst, it is a dangerous public manifestation of a long cold Shi’a-Shi’a war that if left unaddressed could eventually swallow Iraq’s south. This Pandora’s box could lead to carnage and see the heart of Iraq’s economy — still largely based on oil wealth — descend into chaos. For a nation that has fallen behind its neighbors on the shores of the Gulf when it comes to preparing for a post-oil world, this would be another economic catastrophe in waiting.

Many would assume that hope lies with the next elections, set for October 10, 2021, and the “fresh faces” they might bring to Iraq’s parliamentary politics. They base their optimism on the Tishreen movement, the youth behind it, and the shy reforms of electoral laws. The truth of the matter is that the youth of Tishreen lack leadership, recognizable ideologies, or organizational capabilities. Their numbers are dwindling given the impunity around killings and kidnappings along with the allure of “advisory appointments.” Facing the unmistakable certainty of defeat, the die-hard remnants have already decided to boycott the election. The turnout is expected to be bolstered by party loyalists.

Circumstances have to be blamed for Iraqis’ diminishing faith in democracy. For the past 18 years, public service provision and economic reforms were made trivial issues compared to ethnic and sectarian representation as well as security. The former two only seemed to get traction after the liberation of Mosul. Also, there is a generational gap: Over 60% of Iraqis are below the age of 25 and have not experienced the authoritarianism of one-party rule and the dictatorship of a “beloved leader.” They innocently seek a dignified life with employment opportunities and a state that provides them with basic services equal of those in the rest of the world. In their protests they have deemed this urge a yearning for a “homeland,” but they have seriously overlooked the voting mechanism, however lacking, that is on offer.

Old timers, especially those who may criticize this analysis as pessimistic, celebrate the mere act of going to the ballot box as progress, but younger Iraqis increasingly see it as just another hill for opportunists to climb on their shoulders. This cultural hesitancy is fed by the flagrantly lavish lifestyles and privileges that parliamentary membership has brought to officeholders. They compare the high salaries, influence on government contracts, armored cars, and security details to the limited impact MPs have made on their everyday lives. Some 3,500 people have registered to stand as candidates in the October elections. They are ostensibly figures to be celebrated, but to the man on the street they are more like gamblers on a highway to wealth and power — even those self-proclaimed independents without party backing.

Iraqis like to refer to those at the helm of their country politically as “Ali Baba and the 40 Thieves,” from the Persian classic One Thousand and One Nights. They also deplore the paradox that pre-2003 they could easily recognize Ali Baba and his 40 Tikritis, but now there are far too many Ali Babas and thieves to count.

A feeling of betrayal

Iraq’s sorrows come by the lot. On July 19, on the eve of Eid al-Adha, an ISIS suicide bomber took the lives of at least 35 holiday shoppers in Baghdad’s poverty-stricken neighborhood of Sadr City. As with the tragedies of Ibn al-Khatib and Nassiriya, the victims will soon be officially deemed “martyrs” by the government — a decree that brazenly replaces a loved one with a meagre sum of devalued Iraqi dinars and a chance for an orphan or a widow at a public sector job. It is another reminder of the wretched era of Saddam, when Iraq’s cities were filled with Brazilian-made Volkswagen Passats for every solider lost in the brutal war with Iran.

Iraqis have grown tired of being martyrs in waiting. The dynamics in Nassiriya over the past year are not detached from the broader dilemma of Iraq’s south — or even that of the rest of the country — and they follow a trajectory that started in Basra in summer 2018. As Iraqis boil in the heat of July with little electricity or potable water, the death toll of the past week adds further insult to their injury. They have every right to feel betrayed by their leaders. The fury stemming from the failure to deliver may push them to take matters into their own hands. After a power outage at al-Kindi Hospital in Baghdad shut down ventilators last Sunday, killing coronavirus patients, angry armed relatives attacked the facility.

Perhaps more than any other culture, Arabic folklore is rich with tales of loyalty and betrayal. But none stands out as strongly as the story of Baraqish, a female dog entrusted with protecting a group of nomads by barking if bandits were to attack their desert encampment. Baraqish did her job once and the nomads hid while bandits searched their camp, but Baraqish barked a second time and exposed her people. They ended up being slaughtered. The lesson of blame and responsibility from this story is summed up in a simple four-word idiom: جنت على أهلها براقش (“Baraqish has inflicted harm upon her own people”).

Like Baraqish, Iraq's political elites were entrusted with the wellbeing and economic resources of the Iraqi people, but they have miserably failed to deliver.

For those interested in Baraqish's fate, folklore suggests she was killed with her owners. Apparently, the pillaging bandits had no use for her after she could not fulfil her one task. Despite her glorified — and vital — job, Baraqish was expendable and didn’t prove valuable for a new master.

Yesar Al-Maleki is an energy economist and consultant with an extensive knowledge of the intertwining subjects of energy, geopolitics, and economics in the region. He is also a non-resident scholar at MEI. The views expressed in this piece are his own.