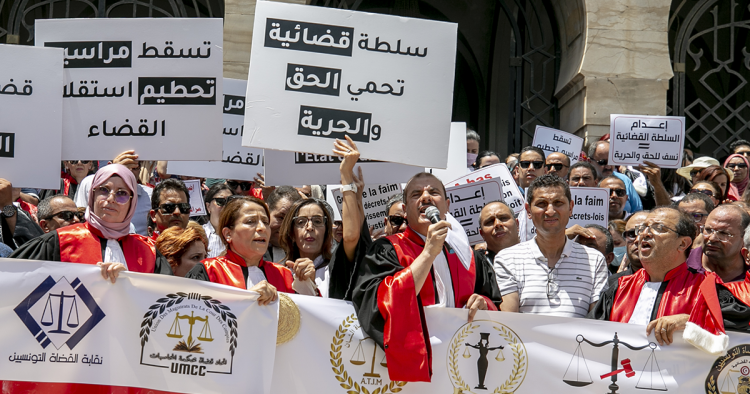 Since the beginning of 2022, Tunisian President Kais Saied has issued decrees reshaping the judiciary in a way that further subordinates it to the executive branch of government. Saied claims that his aim is to “cleanse” it of corruption and other forms of wrongdoing, yet judges counter that the president is interfering in the judiciary and intimidating judges. While in practice no judiciary is totally independent and immune to the influence of executive or corporate power, Saied’s recent steps do indicate a significant change in the relationship between these branches. By siding decisively with and relying almost exclusively on fellow members of the executive branch — the police — President Saied has dramatically ramped up what had been a slow-moving project by the police to fully reassert power over prosecutors.

No other governing tools?

Key to understanding the current situation is the fact that President Saied has relied heavily on security forces to enforce his decrees. One reason may be that he had a preexisting appreciation for the governing capacity of the police. Even before his election, Saied regularly expressed unreserved esteem and praise for them. He has since given the Ministry of Local Affairs portfolio back to the Ministry of the Interior, expanding their governing role.

Another reason for Saied’s reliance on the security forces is that he has few other organized, institutional groups on which to rely, having alienated much of the political elite. As for non-institutionalized people power, polls indicate that he lost much of the support he enjoyed shortly after July 25, 2021, when he dismissed the previous government and suspended parliament. Although Saied may be tapping into widespread distrust — 57.1% of Tunisians said they have either “no trust at all” or “not a lot of trust” in the courts and the legal system — only a few of his supporters mobilized to demonstrate at the High Judicial Council (CSM by its French acronym) on Feb. 6, calling for its dissolution in the hours before Saied announced his intention to do so.

The reliance on security forces to govern may also be because those who might otherwise do so — like officials within the bureaucracy and the judiciary — may be incapable of or resistant to executing the president’s new legal architecture. Some have suggested that this might stem from fear of future legal consequences for carrying out orders that may later be deemed illegal or unconstitutional. It could also be because the president has managed to alienate public servants. The country’s largest labor union, the Tunisian General Labor Union (UGTT), whose most important constituency is public officials, has expressed increasing frustration with what they see as Saied’s merely pro forma consultations with them that do not take their concerns seriously.

When the president announced he would dissolve the CSM, he made the announcement not from the Ministry of Justice, nor the presidential palace, nor in one of his outings among the people in downtown Tunis, but from the Ministry of the Interior. The following day, it was police officers physically surrounding the CSM — not a judicial order, nor instructions from the Ministry of Justice, nor a mass gathering of supporters — that prevented judges from going to work there. As activist Nessryne Jellalia noted in a tweet at the time, it’s one thing for the president to make a speech announcing his intention to close the CSM, but it’s another thing entirely for “the security forces to react without a legal framework, without explicit instruction (to the public at least) and all just on the basis of a declaration which looks more like a threat or intention.” Indeed, the police and the executive branch appear to be trying to govern directly, bypassing checks and balances while not even bothering to mask their power in administrative garb.

The latest attempt by the executive to reassert the dominance it held over the judiciary prior to 2011 came on June 1 with Law Decree 35 of 2022, which increases the president’s power to dismiss judges summarily. The very same day, Saied used the power vested in him by the decree to dismiss 57 judges. Among those on the list are well-known figures who for years have faced highly publicized accusations against them for alleged wrongdoing. Many others, however, were previously unknown to the public. There are allegations that some of the dismissed judges were fired for refusing to prosecute Saied’s political opponents. This is plausible in light of earlier reports that prosecutors had objected to Saied’s requests to arrest politicians.

But other judges have hinted that the police themselves drew up the list, with judges chanting “no police instructions” during a recent protest against the decrees. The leak on social media of police reports concerning one of the judges’ “virginity” in an extramarital sex case may also signal a police hand in the latest move. Ten international human rights groups condemned Decree 35, releasing a statement highlighting that its vague language is an invitation to executive overreach: “The president [is granted] the authority to fire judges and prosecutors at will, based on reports by unspecified ‘relevant bodies’ that they are a threat.” That these unspecified relevant bodies may be the police and other officials within the Ministry of the Interior is also signaled by the Association of Tunisian Judges’ reference to President Saied’s reliance on “secret reports.”

Aside from Saied’s reliance on the police, the police have their own long-standing grievances against certain judges and especially prosecutors. Of the 57 judges dismissed by Saied, more than half are also prosecutors. Police unions have long complained when judges drop charges against suspects whom the police insist are criminals; this is sometimes linked to the fact that police continue to extract confessions from suspects through torture and other forms of coercion, thus making them inadmissible in court. Police have even rearrested suspects immediately upon their release by prosecutors — in one case doing so despite a parliamentary inquiry finding no evidence against the suspects.

Since 2011, police have only occasionally found themselves facing prosecution for killing civilians. Most of these cases have been within the framework of the transitional justice process initiated under the Truth and Dignity Commission, and especially for the killing of revolutionaries who took to the streets in 2011. Police have been openly hostile to the transitional justice process, with the Ministry of the Interior blocking access to its archives and police unions calling on their colleagues to boycott specialized tribunals that they have deemed illegitimate. In 2018 and 2020, police stormed courts to directly pressure judges to release fellow officers facing prosecution.

While police have continued to enjoy impunity, they have also pushed back against prosecutors working to establish even a modicum of accountability. In the current moment, President Saied’s stated goal of “cleansing” the judiciary seems to align with the police’s own institutional interests of consolidating power and maintaining impunity. For now, it is not certain whether this concerted project from a unified executive branch will succeed in the face of pushback from judges and other public servants who have gone on strike. It is also unclear whether the executive branch will remain unified between its component parts or if this is merely temporary. In the meantime, the police are using the current constellation of forces to consolidate their power.

Fadil Aliriza is the founder and editor-in-chief of Meshkal.org, an independent news website in English and Arabic covering Tunisia, and a Non-Resident Scholar with MEI’s North Africa and Sahel Program.