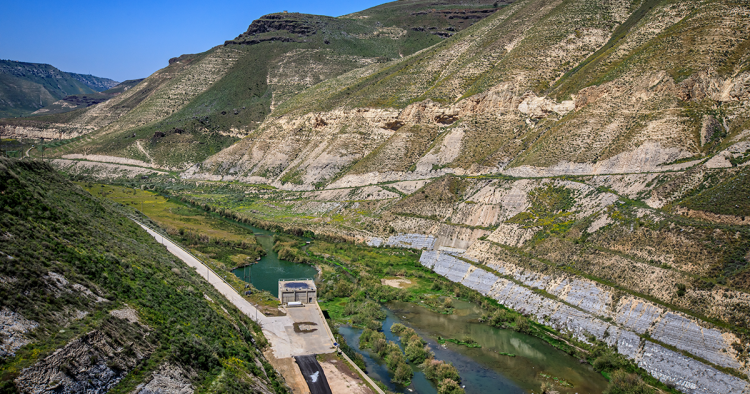 Jordan is facing an existential challenge and it has nothing to do with the deadlocked Israeli-Palestinian peace process, the war in neighboring Syria, or the threat of militant Islamists. The challenge is climate change, which is responsible for poor rainy seasons over the past few years. The situation has become so bad that in the past few weeks the government admitted that six of the kingdom’s 14 active dams have now completely dried up, exacerbating endemic shortages of water used for drinking, irrigation, and industry.

Making things worse is the fact that Jordan’s population has increased during the last decade due to the Syrian civil war, which resulted in waves of refugees seeking asylum in the kingdom. About 1.2 million Syrians now live in Jordan, almost half in al-Zaatari refugee camp. One prominent water expert, Dr. Duraid Mahasneh, said that underground water basins, which provide 60% of potable water, can only meet the needs of 2 million citizens. Jordan’s population currently stands at 11 million.

Minister of Water and Irrigation Mohammad al-Najjar admitted last summer that water loss due to poor infrastructure is estimated at 48%. About 10% of the kingdom’s annual water needs, roughly 1.3 billion cubic meters, come from the underground fossil aquifer of al-Disi in southern Jordan. It is a non-renewable source that will dry up in 50 years. Al-Disi’s water is naturally highly radioactive so the government has sought to assure residents that it mixes it with water from other sources to limit the health risks.

Mahasneh and others had warned of worsening water shortages back in the 1990s. They said that water in active aquifers will eventually become brackish or polluted due to excessive pumping and urban expansion. They also said that the only viable and sustainable solution would be to build a desalination plant in Aqaba on the Red Sea. Why successive governments ignored such warnings and failed to execute the strategic project is puzzling.

In 2013 Jordan and Israel signed an agreement to collaborate in building a canal that would carry seawater from the Red Sea to the Dead Sea, generating electricity that would be used to desalinate water while dumping brine into the Dead Sea, which would help to stabilize the shrinking lake. But even if the canal is finished by 2025, it will still produce only 10% of the country’s water needs. Moreover, under Prime Minister Benyamin Netanyahu relations with Jordan deteriorated and Israel refused to commit to the project, which was finally cancelled earlier this year.

Last week Jordan, Israel, and the UAE signed a letter of intent in Dubai for a so-called “energy-for-water” project, under which Jordan will build a massive solar farm in the Jordanian desert that will generate clean energy to be sold to Israel in return for desalinated water. The project will be financed by the UAE and the solar farm will be built by an Emirati company while Israel will build a desalination plant on the Mediterranean coast to provide water to Jordan, about 200 million cubic meters annually.

The project has been criticized by water and energy experts in Jordan as well as political activists. Mahasneh is puzzled by the logic behind the trilateral project. He says that Jordan already has a surplus of renewable energy that can be used to power a desalination station in Aqaba. There is no need for Israel, he says.

Political activists, who are mostly against normalization with Israel, rejected the new deal outright because it put a key resource in the hands of Israel. They say what if ties worsen? Israel may use the water issue as a pressure tool over the Jordanian government. A 15-year deal to import natural gas from Israel — delivery started this year — has been blasted by political parties and activists for the same reasons. Now, activists say, Israel could end up controlling both energy and water supplies to the kingdom.

Jordan is already dependent on Israel for water. Under the 1994 peace treaty Jordan receives 50 million cubic meters of water annually from Lake Tiberius. This year Jordan bought an additional 100 million cubic meters of water to deal with acute shortages. This increasing dependency on Israel has angered Jordanians, who now believe that the kingdom’s sovereignty is threatened.

While the Red Sea-Dead Sea project with Israel has been shelved, the government has decided to carry out a downsized version of the project called the “national carrier.” Basically, it is the same concept at a smaller scale that will operate with an initial capacity of 100 million cubic meters at an estimated cost of about $2 billion with the eventual aim of desalinating and transferring 250-300 million cubic meters of water from the Gulf of Aqaba on the Red Sea. One problem with this, besides securing the funding, is that it would take at least five years to begin operations.

Jordan does not have that time and the problem will only become more urgent if this year’s rainy season, which is already late, proves to be short and poor. The water deficit this summer alone was estimated at 40 million cubic meters and officials say that they can only meet 60% of water needs for drinking and agriculture at current rates.

Jordanian officials hope that improved relations between Amman and Damascus will also help alleviate the kingdom’s water needs. The Syrians have not been honoring their commitment to supply Jordan with water from al-Wahda dam on the al-Yarmouk River on the Syrian side. If the Syrians relent and pumping is resumed, a small part of Jordan’s growing thirst for water may be met.