Facing the abyss: Refugees and the Beirut port explosion one year later 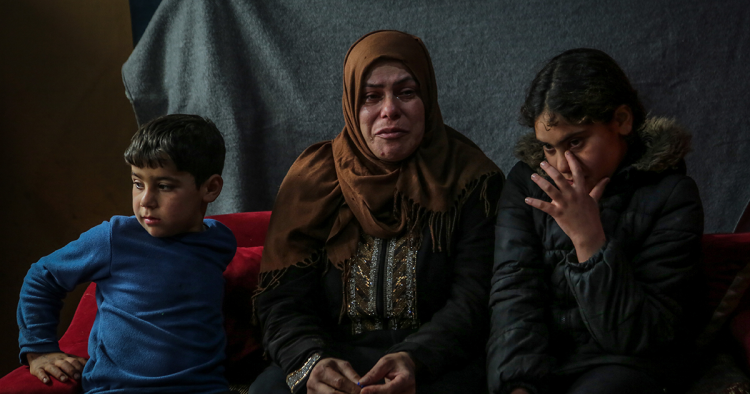 On the first anniversary of the catastrophic explosion at the Beirut port last August, Lebanon is threatened by political discord and economic collapse. The past year has been difficult for the average Lebanese citizen and it has been even worse for the country’s most marginalized communities. The ripple effects of the overlapping political, economic, and health crises have pushed the vast majority of refugees and migrant workers into extreme poverty. These communities now stand on the edge of the abyss.

After the port explosion of August 4, 2020, the Lebanese parliament passed Law No. 196/2020 to provide financial compensation for the victims. Over 200 people were killed, more than 7,000 were injured, and hundreds of thousands lost their homes. Among the hardest hit were Syrian refugees, who accounted for nearly a quarter of those killed and many of the displaced. However, the law did not take into account the conditions of marginalized communities like refugees that were impacted by the explosion. To apply for compensation, individuals and families of the victims were required to provide official documents that many Syrian refugees do not have or face difficulties obtaining.

Member of Parliament George Atallah recently proposed a law that excludes foreign victims, including refugees and their families, from receiving benefits. Atallah falsely claimed that these individuals did not need benefits since they have life or health insurance. However, he did not propose a similar restriction for Lebanese victims. Atallah acknowledged that his proposal was intended to limit Lebanon’s financial obligations from the explosion.

The discrimination against refugees in Lebanon did not begin with the August 2020 port explosion, nor is it limited to dishonest politicians who have used vulnerable communities as a convenient scapegoat to distract from their own failures. Rather, it is a systematic policy with a range of practices employed for decades that are designed to undermine the rights of refugees and other vulnerable communities while benefiting from their presence in the country.

Over the past year, Lebanese authorities have practiced various types of racial discrimination against refugees. Several municipalities have imposed discriminatory restrictions on the movement of Syrian refugees under the pretext of stopping the spread of COVID-19. Meanwhile, Palestinian refugees still face institutional restrictions on their right to work and own property as well as to benefit from health and education services.

A recently published Reuters report revealed that Lebanese banks swallowed at least $250 million of United Nations funds allocated to refugees and poor communities by selling the Lebanese lira at highly unfavorable exchange rates. This money was intended for health and educational programs and basic services for refugees. At the same, Lebanon’s banks have imposed strict restrictions on bank withdrawals and transfers. These policies apply to Lebanese citizens, private companies, and NGOs, as well as Palestinian and Syrian refugees, foreigners, and migrant workers.

Since the fall of 2019, Lebanon has experienced an accelerating economic collapse. Hyperinflation and the rapidly devalued Lebanese currency have impoverished a broad swath of the population. The port explosion destroyed grain silos and seriously affected trade and other essential economic activities; before the blast the port was responsible for handling nearly 70% of Lebanon’s imports. This has been exacerbated by the COVID-19 pandemic and the economic crisis, impacting the provision of COVID-19 vaccines and the availability of medicines and resulting in comprehensive power cuts and a lack of fuel. According to a report by the Central Administration of Statistics, inflation has caused food prices to rise by 400% in just one year.

Basic foodstuffs and medicine are now out of reach for many, especially refugees and displaced persons. According to estimates by the World Food Program, the number of food insecure Syrian refugees exceeds 1.2 million, 800,000 of whom are receiving assistance. Many refugees are struggling to survive after losing their seasonal jobs due to the COVID-19 pandemic and the economic crisis. As the economy has deteriorated, so too have basic services. In addition, fuel shortages and power outages have disrupted the water supply.

The number of refugees who have received the COVID-19 vaccine lags far behind that of vaccinated Lebanese citizens. According to the Lebanese Ministry of Health, more than 1.8 million residents have been vaccinated. Out of these, only 28,000 are Syrian refugees and fewer than 35,000 are Palestinian refugees. Lebanon reached an agreement with the World Bank for fair and equitable vaccination of 80% of the population without any discrimination, including toward non-citizens residing in the country. However, vaccinations of refugees lag far behind the rest of the population.

The first vaccination campaigns for the Syrian refugee camps in the Bekaa Valley and southern Lebanon were only launched last month. In mid-July, UNRWA announced that it was working to equip its clinics to vaccinate Palestinian refugees. This delay has placed refugees at greater risk of contracting COVID-19, especially as the delta variant becomes increasingly prevalent. Dr. Abdel Rahman al-Bizri, head of the committee supervising the Lebanese vaccine campaign, confirmed that 60% of current infections in Lebanon are due to the delta variant.

While NGOs in Lebanon are still trying to respond to the COVID-19 pandemic and the port explosion, women and girls have been left increasingly vulnerable. This is especially pronounced among refugees and migrant workers. Due to deteriorating conditions in the camps, including a lack of water, health and basic hygiene have suffered. Menstrual health products have become more and more unaffordable, with prices rising by more than 320% in less than six months. A parliamentary committee found that 700,000 Lebanese women and girls and others from some refugee communities have been impacted. Instead, women use newspapers and old bedding to meet their needs. Other women do not leave their homes for fear of blood stains appearing on their clothes.

In July, the World Bank classified Lebanon’s economic situation as one of the three most severe crises in the world and warned that its social crisis “could rapidly become catastrophic.” However, it did not foresee any potential improvement or resolution on the horizon.

As the international community observes the 70th anniversary of the 1951 Refugee Convention, refugees in Lebanon have been left to face the country’s political, economic, and health crises alone. Rather than continue the policies that resulted in the current situation, the international community needs to adopt a new approach — one that does more to protect the most vulnerable.

Until a political solution is found, short-term steps can be taken. This includes direct engagement and funding of U.N. agencies and NGOs that bypass Lebanese banks and corrupt officials. A combination of cash payments and vouchers to refugees for basic goods and medicines will provide vital assistance. In addition, special accommodations need to be made for refugee women and girls related to hygiene and reproductive health products. These are not permanent solutions, but they will prevent any further deterioration of refugees’ already precarious situation.

Dalal Yassine is the Executive Director of Middle East Voices, a lawyer and advocate for gender and human rights for Palestinian refugees in Lebanon, and a Non-Resident Scholar at MEI. The views expressed in this piece are her own.