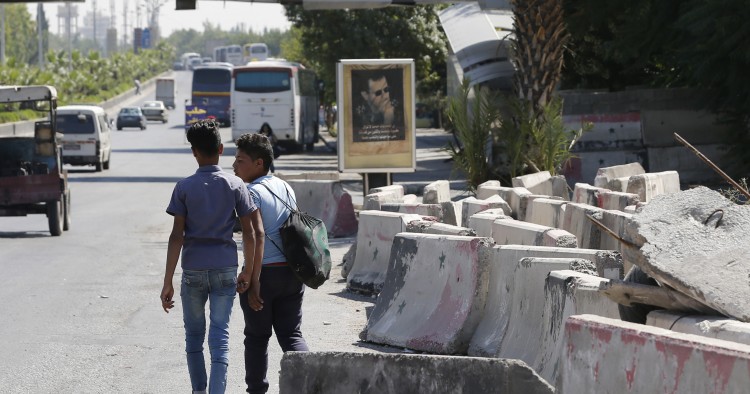 Against all odds, the Syrian government has managed to hold on and win the country’s seven-year civil war. As the focus now shifts from fighting to recovery, the transition to governance in a post-conflict environment is creating new and unexpected challenges. Areas of Syria previously loyal to the government are becoming increasingly vocal about these challenges, especially on social media.

There are finally signs of improvement on the economic front. The Naseeb-Jaber border crossing between Syria and Jordan reopened in October, giving the economy a much-needed boost. The Syrian cabinet has approved a state budget of $8.9 billion for 2019, an increase of $1.6 billion from the previous year. The exchange rate is heading the right direction too, falling from a high of 510 Syrian pounds to the dollar to around 440.

However, the government in Damascus and state officials are making life increasingly difficult, both for themselves and regular Syrians. Over the last three months a number of clumsy and unpopular laws have increased domestic pressure in government-held areas, prompting loyalists to take to social media and voice their frustration.

Legislation is being issued quickly, and faces growing scrutiny and criticism. In September, the Ministry of Defense imposed a sudden travel ban on all Syrian males between the ages of 17 and 42, even those officially exempt from military service, unless they have special permission from the army.

The travel ban was not announced beforehand and took effect immediately. An estimated 200,000 males had to cancel travel plans as they were turned back from the border, often at the last minute. Jobs and money were lost and even supporters of the government were left struck by its lack of notice or understanding.

A fierce backlash ensued. Nizar al-Fera, a lead anchor on pro-government SAMA TV, singled out the law and criticized those who proposed it, live on Syrian television. “Today Syrians are asking why? Why would you introduce a bill when things are working well? Why would you want to tarnish and harm the government’s reputation? Syrians are asking why, and no one is responding to them.”

Article 48 of the Military Service Act, as it is formally known, was originally intended to be proposed in 2007, but was shelved without debate in parliament. Issuing such a law at a time when Foreign Minister Walid al-Mouallem was calling on refugees to return home sent mixed signals about what the government actually wanted. After a week of sustained outrage on social media, the law was cancelled.

The greatest domestic controversy, however, has been over Legislative Decree “16/2018,” which revamped the Ministry of Religious Endowments (known in Arabic as Awqaf), expanding its powers and role. Issued at the end of September, the law quickly polarized the country, with a majority of loyalists deeming it an attack on secularism.

The “Awqaf Law,” as it came to be known, sought to give the Ministry of Religious Endowments greater power –– including the ability to name and set the term of the grand mufti of Syria –– at the expense of other ministries and institutions. The main critique of the bill was that it would empower religious groups and endanger the secular nature of Syrian society.

The timing of the legislation was also problematic. In the immediate aftermath of an easing of fighting in Damascus and southern Syria, a conflict that the regime has framed in “secular vs. extremist” terms, the government proceeded to give special powers to a religious ministry.

Opinions on the issue were strong. As journalist Siba Mansour wrote, “The People's Assembly (parliament) has to suspend this decree. Syria is a secular country.” Meanwhile, Awqaf Minister Mohammad Abdulsattar described the bill on state television as a “huge achievement.” Nabil Saleh, a Syrian MP and fierce critic of the bill, started the hashtag “#No_to_decree_16” on social media. Saleh also shared a document listing 36 legal, constitutional, financial, and other errors with the bill. Activist Maxim Mansour added, “We refuse to grant the Ministry of Awqaf more powers, and we call for limiting the powers of religious bodies in political, cultural, and community life.” The bill was subsequently amended in parliament and a watered-down version was introduced again in October.

Government legislation has not been the only cause for concern either: Aleppo has been plagued by a dramatic rise in killings and abductions of children and an increase in crime more broadly. In response, President Bashar al-Assad ordered the cabinet, headed by Prime Minister Imad Khamis, to make an official visit to Aleppo in October. Khamis was himself the cause of a recent controversy when he was photographed wearing a Rolex watch worth over $13,000.

The trip to Aleppo, which was meant to be an important public relations exercise for the government, went badly wrong, resulting in further negative headlines. While touring a government building in the city, with dozens of cameras in tow, Syria’s minister of the interior, Mohammad Ibrahim al-Shaar, was filmed talking to an old clerk who was providing stamps for people to get documents signed. After asking the customers how much they were paying, the minister discovered that the clerk, Riyyad al-Batal, was adding 50 Syrian pounds, the equivalent of $0.10, to the cost of stamps for himself. Al-Shaar immediately ordered his arrest and directed the officers accompanying him to begin an investigation. The minister was attempting to show his firm stance on corruption, but a video of the incident went viral and caused widespread dismay among loyalists. Al-Shaar was criticized for exercising his authority inconsistently in the fight against corruption, targeting a single employee while turning a blind eye to the actions of corrupt business networks at a higher level.

The Aleppo Medical Association, of which the clerk was a member, later clarified that he was entitled to add a 15 percent charge to the cost of the stamps. It then emerged that al-Batal’s son had been serving in the army for the previous eight years. Former Army General and Syrian Ambassador to Jordan Bahjat Suleiman even called for al-Shaar to issue an “immediate apology to the gentleman.” One Facebook commentator described the incident as an “attack on the livelihoods of the poor.”

Amid continuing protests, the clerk was eventually released without charge, signaling the growing influence of social media on decision making. In a cabinet shuffle in late November that saw nine ministers removed, al-Shaar was one of the ones to go. The events in Aleppo may have contributed, having generated too much bad publicity domestically. President Assad decided to replace al-Shaar with Major General Mohammed Khaled Rahmoun, a tough and controversial figure. Rahmoun previously headed up the powerful political security apparatus, one of Syria’s four main internal intelligence agencies. He faces U.S. sanctions and has been accused of war crimes. The move was seen as a step towards a firmer stance on corruption. Assad later instructed the new cabinet to place the highest emphasis on fighting corruption going forward.

This may be in part due to the fact that Syrians in government-held areas are becoming increasingly critical of government officials and narratives. Wesam Jdeed, an editor for the pro-government Al-Watan newspaper, noted sarcastically that “what the officials say is a sacred book, but the laws and regulations of the area where the official is working are not.” Najdat Anzour, a top Syrian filmmaker who was elected as deputy prime minister, explained during a parliamentary session that “the citizen is insulted by the words of the ministers, ‘we will and we shall,’ and the time has come to change them.”

Damascus has finally emerged from its seven-year-long war battered and scarred but victorious. But policies and laws are now being issued quickly, too quickly for a population that is becoming increasingly sensitive to government decisions. That population is not shy about making itself heard, and social media is taking on a growing role as an important barometer of support and dissent for government policies and officials in loyalist areas of Syria.