The growing threat of ISIS in Syria’s Badia 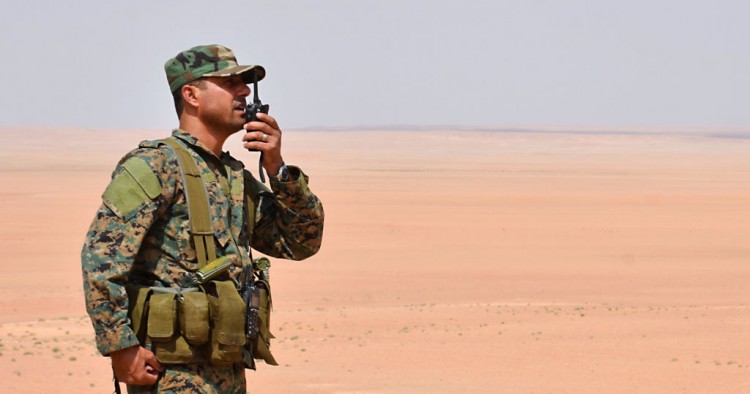 When the American-backed Syrian Democratic Forces (SDF) captured the village of al-Baghouz in late March 2019, ISIS’s self-proclaimed “caliphate” came to an end. The largest multinational military coalition in modern history spent four-and-a-half years methodically rolling back ISIS’s control of an expanse of territory the size of Britain, stretching across Syria and Iraq. Taken together, the dozens and dozens of victories that got the Global Coalition to Defeat ISIS to the final battle in al-Baghouz represented a tremendous military achievement. However, terrorist groups do not need territory to survive. In fact, ISIS and its predecessor movements in the Levant have thrived for far longer without territory than they have with it.

In the year since the fall of al-Baghouz and the demise of ISIS’s territorial “state,” the United States and its SDF allies have adapted to maintain pressure on ISIS in this new phase. Having lost territory to control, some ISIS militants faded back into civilian communities and many others fled into unpopulated, ungoverned spaces from which they would regroup and sustain an insurgency. Countering this newly covert and flexible ISIS presents far more complex challenges than fighting a terrorist organization operating in the open in clearly delineated territory. Challenging this evolved enemy requires deeper use of law enforcement tactics, intensive intelligence gathering, extensive aerial reconnaissance, and the frontline deployment of well-trained, versatile forces who are intimately familiar with their local operating environments. Though the ISIS threat remains ever present in U.S. and SDF-administered areas of northeastern and eastern Syria, it appears to be both under control and being slowly degraded.

A safe haven in the Badia

On the western side of the Euphrates, however, in territories controlled — at least on paper — by the Syrian regime, the ISIS threat landscape and the response to it are markedly different. Over the past year, ISIS has found safe haven and strategic depth within Syria’s regime-controlled Badia — the expansive central desert region encompassing much of Homs, northeastern Hama, southern Raqqa, and western Deir Ez Zor governorates. The threat posed by ISIS in the Syrian Badia was made abundantly clear in April 2019 — a month when ISIS killed at least 65 pro-regime personnel; when two entire battalions of the Syrian Army vanished for 48 hours after being surrounded and besieged by ISIS; and a Russian patrol disappeared for hours after being chased into the desert in a complex ISIS ambush.

The intensity of ISIS attacks on pro-regime targets in the Badia in April 2019 sparked a rare emergency meeting later that month involving senior officers from Syria’s military and air force intelligence directorates, the Syrian Army, the Russian military, Iran’s Quds Force, Hezbollah, and a number of pro-regime paramilitary groups. At the close of the meeting, participants agreed that what was needed was not a concerted campaign to defeat ISIS, but a strategy of containment. Days later, the reason for that became clear, when pro-regime forces in the Badia were withdrawn and redeployed to Idlib, to launch a major offensive there.

In the year since that fateful decision was made, ISIS’s position in the Syrian Badia has gradually strengthened, as more and more pro-regime forces have been sent to Idlib and those who remained in the desert were increasingly ill-equipped to do much more than occasional patrols along key roadways. At no point in the last 12 months have pro-regime forces launched a single sustained and meaningful offensive against ISIS in the desert region where the terrorist group has so clearly established a new home. Despite losing personnel every week for the past year to ISIS attacks, the Assad regime has remained focused on other issues, not least conducting two months-long rounds of largely indiscriminate bombing campaigns against the 3.5 million civilians trapped in Idlib.

As winter turns to spring and as coronavirus restricts the pro-regime alliance’s ability to deploy effectively, ISIS appears to be escalating its insurgency in the Badia. The group’s most significant attack anywhere in Iraq and Syria in at least a year took place south of the key gas town of al-Sukhna on April 9-10, when ISIS set up multiple near-simultaneous ambushes and assaults on pro-regime positions, killing at least 10 soldiers — and potentially many more. The attacks attracted 36 hours of Russian jet and helicopter strikes — a clear sign of their unusual scale. They were also followed by several more substantial ISIS attacks on regime positions in northeastern Hama and western Deir Ez Zor, as well as three or more deadly IED attacks.

The scale and sophistication of events last week indicate that it is just a matter of time before ISIS seeks to control territory again in central or eastern Syria. Despite the huge value of the Badia to the regime — it holds the majority of Syria’s gas resources, which in turn fuels the country’s electricity sector — there is still no sign that it will receive the security investment it requires. It has been clear for years now that the Assad regime has neither the will nor the capacity to contain, let alone defeat ISIS. The ingredients that fueled ISIS’s explosive expansion in Syria in 2013 and 2014 still exist today — many of them are substantially worse. There is no logical reason to expect the regime to do any better than it did then and therefore, the international community will, whether it wants to or not, have to do what it can to weaken ISIS’s Syria-based capabilities itself. “Leaving ISIS to Assad, Russia, and Iran” is an increasingly popular proposal in America these days, but given recent precedent, nothing could be more dangerous.

Charles Lister is a senior fellow and director of MEI's Countering Terrorism and Extremism Program. The views expressed in this articles are his own.