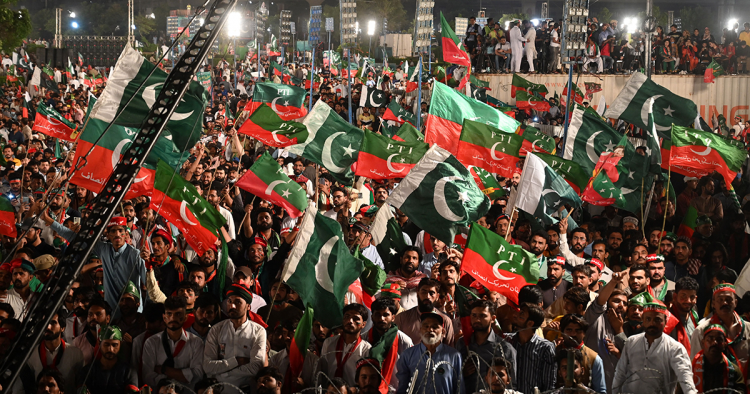 In January, as his relations with the powerful army chief Gen. Qamar Javed Bajwa frayed and the opposition began to coalesce against him, then-Prime Minister Imran Khan issued a warning to those plotting his ouster:

“If I leave government, I’ll be even more dangerous to you all. Up till now, I just sit in the office quietly, watching this (contemptible) spectacle. If I ever get out onto the streets, there won’t be any place for you (all) to hide — because the people have come to see you (all) for who you really are.”

Indeed, since Khan was removed from office earlier this month after losing a vote of no confidence, his supporters have taken to the streets in large numbers — first in protests the day after his ouster, and then in massive rallies led by the former prime minister in Pakistan’s largest cities. Rather than just fading into political oblivion, as Bajwa and the opposition seem to have assumed, Khan and his Pakistan Tehreek-e-Insaf (PTI) have come back with a bang.

Khan’s removal has served to galvanize and perhaps even expand his support base, which sees him as the victim of a “conspiracy” involving America, Bajwa, and the former opposition, which is viewed by many as corrupt and opportunistic. And with this appearance of collusion, Khan’s opponents among the senior brass of the army and in the political class have unwittingly rehabilitated his public image. In his final months as prime minister, Khan’s approval rating ebbed as Pakistanis suffered from double-digit inflation and anemic economic growth.

As Khan’s political fortunes have improved, the new coalition government is struggling to handle the hot potato of a deteriorating economy and the army is facing criticism unprecedented in recent years. Pakistan’s future is deeply uncertain at a time when it desperately needs political stability.

The anatomy of Khan’s descent

Khan’s ouster originates with his falling out with Bajwa, who — along with Inter-Services Intelligence (ISI) chief Lt. Gen. Faiz Hameed — helped bring the ex-cricket star to power in the 2018 elections, sustain his coalition, and even support his attempts at governance. In March, coalition partner Chaudhry Pervaiz Elahi, while weighing whether to join the opposition, likened the army’s hands-on tutelage of Khan to an overgrown child whose “nappies” were still being changed by an adult.

Bajwa began to sour on Khan due to frustration with his ability to govern and manage relations with coalition partners, as well as mounting differences over foreign policy. But the breaking point appears to have been last October, when Khan attempted to keep Hameed in place as ISI chief, likely to use the general’s support to stay in power and position his party for a victory in the next elections. Subsequently, the army leadership signaled its neutrality in politics and its withdrawal of patronage for Khan. As the no confidence vote neared, Khan issued a veiled attack on Bajwa, stating that “only animals are neutral.”

The current National Assembly’s term expires next August. With an economy in crisis, Khan’s opponents could have patiently waited as his reputation took even more of a beating with soaring inflation and fuel shortages and electric power blackouts on the horizon.

But in removing Khan from power now, his opponents appeared to have achieved two key strategic goals: prevent Khan from appointing his ally Hameed as Bajwa’s successor this November and thus unilaterally determining the rules of the game for the next general elections. Otherwise, no one in their right mind would seek to assume control of Pakistan right now, as its economy faces grave challenges and with elections slated to take place within the next year and a half.

An economy in crisis

The political transition and ensuing crisis could not have taken place at a worse time for Pakistan’s economy, which is facing double-digit inflation as well as growing current account and fiscal deficits. Amid soaring global fuel prices following Russia’s invasion of Ukraine, Pakistan’s foreign exchange reserves have rapidly dwindled, currently only covering around two months of imports.

Talk of a Sri Lanka-style default in Pakistan is premature. But the country’s extended fund facility (EFF) program with the International Monetary Fund (IMF) remains stalled. The EEF’s seventh review has drawn out, putting the first of the three remaining $1 billion tranches on hold. Getting the program back on track is essential to unlocking inflows from other bilateral and multilateral lenders and averting a balance of payments crisis.

At the IMF’s spring meetings this past weekend in Washington, the Pakistani delegation expressed its desire to extend the program by an additional eight months — a responsible move and positive signal to markets. But the Fund has made clear that completing the seventh EFF review requires "prompt action” to “reverse the unfunded subsidies” on energy announced by Khan’s government in March.

Before the IMF talks, the new coalition government, led by Prime Minister Shehbaz Sharif and his Pakistan Muslim League - Nawaz (PML-N), decided, for the time being, not to roll back the subsidies. It will now have to develop a plan to raise energy rates that is satisfactory to the IMF as well as its coalition partners, which will have to fight in elections sometime within the next 18 months.

The PML-N-led coalition government faces a series of impossible policy choices and is clearly struggling at balancing its political and economic imperatives. It could also be boxing itself in with its anti-IMF rhetoric. Ahead of Finance Minister Miftah Ismail’s talks with the IMF in Washington, Defense Minister Khawaja Muhammad Asif called for abrogating the Fund-backed law that gave independence to the central bank. He accused Khan of selling Pakistan’s sovereignty to the IMF. Similarly, Sharif’s coalition partner, Bilawal Bhutto Zardari, has repeatedly lambasted Khan as “a slave of the IMF.”

Finance Minister Ismail is a straight-shooter and recognizes the need for more responsible macroeconomic planning, including eliminating untargeted subsidies and boosting exports. But the PML-N leadership clings to a model of growth fueled by domestic consumption, hard infrastructure development, and overvaluing of the rupee.

While continued energy subsidies will require even deeper cuts to development spending in Pakistan, since coming to power, the energetic Sharif has been blitzing across Pakistan, announcing new projects and advanced timelines for ongoing ones. It seems as if Sharif’s plan is to do a lot of performative ribbon cutting for projects his government has no money to pay for and then call for elections later this year.

Khan suffered politically for implementing what has been a particularly stringent IMF program. Sharif clearly doesn’t want to face the same domestic backlash. Given Pakistan’s economic troubles, Khan’s hint at prolonged protests in the capital if early elections aren’t called, and the unwieldy nature of coalition governments, Sharif is likely to stay in power just long enough to push through electoral reforms and then hand over the keys to a caretaker government that would oversee the polls and obstruct Faiz’s appointment as army chief.

Bajwa’s attempt at a simultaneous political and geopolitical realignment has not only been overly ambitious, but it is also based on flawed assumptions.

Rather than leading to a more durable political setup, it has only created greater instability. Sharif is more skilled than Khan at governance, but the gains from his experience will be negated by both his party’s warped views on macroeconomic policy and pressure to make choices that are good for winning the upcoming elections but deeply harmful to the health of the post-election economy.

Furthermore, the groundswell of support for Khan’s nationalistic politics will constrain the foreign policy rebalancing Bajwa seeks, including potential counterterrorism cooperation with the United States and the pursuit of detente with India.

In any event, there’s little goodwill for Pakistan in Washington. And while resuming direct non-pharmaceutical trade with India could help control the import bill and food inflation, it would give ammunition to Khan and do little to resolve the drivers of tensions between the two countries.

India’s Hindu nationalist government seems uninterested in Bajwa’s call to “bury the past” as Prime Minister Narendra Modi’s attacks on Muslims accelerate and New Delhi attempts to orchestrate the election of a Hindu chief minister in Muslim-majority Kashmir. Down the road, India’s next prime minister could be the founder of a vigilante organization.

Bajwa also seems to have underestimated the support within the military biradari for Khan. In response to unprecedented criticism of Bajwa and the army on social media, the coercive power of the state has been deployed toward Pakistani nationalists and even ex-army officers. These developments bear an unsettling resemblance to the drastic policy changes by Gen. Pervez Musharraf after 9/11, which triggered unrest in Pakistan.

Rather than leading to greater order, the transition Bajwa has pursued may have opened up a Pandora’s box. Khan and his supporters seem to be unwilling to accept anything but a return to power through elections. Attempts to disqualify him from politics will only make matters worse. And yet his return as prime minister would pose its own set of challenges in terms of Pakistan’s relations with the West as well as relations with domestic power brokers. It is hard to see light at the end of this tunnel.

The Pakistani Taliban’s radical rebranding: Is there more than meets the eye?