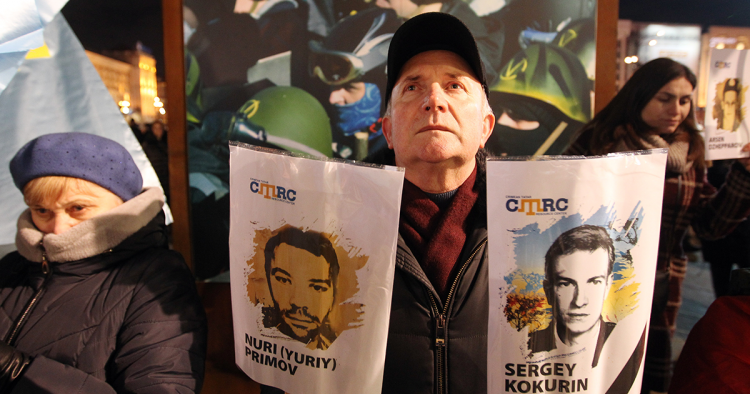 Despite their unique characteristics and contexts, the Russian occupation of two regions in Georgia and its annexation of Crimea in Ukraine share a variety of similarities when it comes to the human rights situation on the ground.

Russia’s aggression against Ukraine began at the end of February 2014 with the occupation of the Ukrainian peninsula of Crimea. On March 16, a so-called referendum was conducted on the “inclusion” of Crimea in the Russian Federation. Russia has claimed that its control over Crimea started after this referendum. However, in January this year, the European Court of Human Rights concluded that Russia has been exercising effective control over Crimea since February 2014. There are 11 United Nations General Assembly (UNGA) resolutions mentioning the status of Crimea that support the territorial integrity of Ukraine and human rights and object to the militarization of the peninsula.

In April 2021, Russian military forces amassed at the eastern Ukraine border. Ukraine has defined the territories controlled by Russia and pro-Russian forces in both Crimea and the eastern Ukraine Donbas region as temporarily occupied territories. However, while the international community largely acknowledges that Russian actions in Donbas are destabilizing, it does not recognize direct Russian control of the region. In its preliminary reports, the Office of the Prosecutor of the International Criminal Court suggested that an international armed conflict existed in eastern Ukraine alongside an non-international one.

There have been two main negotiation processes launched to discuss and resolve the situation in eastern Ukraine: the Normandy Format, involving the foreign ministers of Ukraine, Russia, Germany, and France; and the Minsk Protocol, with the engagement of Ukraine, Russia, the Organization for Security and Co-operation in Europe, and leaders of the armed groups of the so-called Donetsk People's Republic and the Luhansk People's Republic. In the meantime, Crimea has never been the subject of any negotiation process, since Russia rejects any talks on the status of the peninsula.

Prior to spring 2014, Ukraine had never faced such a large-scale crackdown on the civil population. Eastern Ukraine was immediately turned into a battlefield. According to the Office of the United Nations High Commissioner for Human Rights, between April 14, 2014, and Feb. 15, 2020, there were as many as 44,000 conflict-related casualties in Ukraine, including up to 13,200 deaths and tens of thousands of injuries.

An exhaustive list of key human rights violations can be found in numerous UNGA resolutions, but one of the most significant issues is that of political prisoners. Currently, there are at least 122 Ukrainian citizens detained in occupied Crimea and in Russia for political motives, according to our coalition of Ukrainian human rights NGOs that are providing the assistance to these people and their families. Most of them are Crimean Tatars. In parallel, according to the Media Initiative for Human Rights, at least 170 prisoners are held in occupied Donbas, 15 of them women.

Another important trend is the militarization of Crimea, with consequences not only for security but also for the civil population’s human rights, and includes the militarization of public spaces and the forceful conscription of Ukrainian citizens in Crimea into the Russian army. It also extends to engaging children in military activities, so-called military-patriotic camps.

While analyzing the key human rights violations in Crimea, we see that all of them are essentially aimed at colonization and changing the demographic composition of Crimea. The Russian Federation tries to expel Crimea’s non-loyal population to mainland Ukraine while settling loyal citizens from Russia into the peninsula. This policy may amount to a war crime, but it also creates additional obstacles for any future attempts by Ukraine and the international community to end the occupation of Crimea.

Exactly 100 years ago, the Russian army occupied the first Democratic Republic of Georgia. In the decades that followed, the occupation has had many faces. Georgia regained independence in 1991 while two breakaway regions, Abkhazia and South Ossetia, remained occupied following the Russian invasion in August 2008. Since conflicts erupted in Abkhazia and South Ossetia in the early 1990s, Moscow has retained the role of peacekeeper and mediator, promoting those conflicts as ethnically driven quests for independence. After invading Georgia in 2008, the Russian Federation has revealed its true face as an occupying power. As a result of the Russian aggression in Georgia, up to 250,000 individuals have fled their homes, thousands have lost their lives, and up to 40,000 ethnic Georgians have managed to return to their homes in the Gali district, the closest to Georgia proper.

After the 2008 war, even more families fled the Tskhinvali region. And in parallel to a new campaign for international recognition of Abkhazia and South Ossetia, Russia-backed de facto authorities introduced new policies that continue to violate human rights on the ground. Furthermore, these territories were left without international security and human rights monitoring mechanisms, while the Geneva International Discussions — the only negotiation format where Russia acts as a party of the conflict — have largely become a series of technical meetings with no high-profile political representation from cochairs and parties.

Under such political circumstances, human rights violations in the occupied territories in Georgia vary from the restriction of freedom of movement to banning schooling in the native language and stripping local passports from the indigenous population. Moreover, Moscow’s “alliance and partnership” agreement with the de facto Abkhaz authorities granted the Russian Federation the power to protect the disputed “Georgian-Abkhaz border.” With the developments of recent years, the Georgian side has repeatedly expressed concerns over the de facto annexation of Abkhazia and South Ossetia similar to Crimea’s annexation in 2015.

2. Similarities and differences in the human rights situation

It is remarkable that the most active countries of the European Union’s Eastern Partnership — Ukraine, Georgia, and Moldova — have all suffered at some point from destabilizing armed conflicts with the apparent or even open engagement of the Russian Federation. A closer look at the conflicts in Georgia and Ukraine show many similarities, particularly when it comes to the human rights situation, despite the fact that the affected population in Ukraine is much bigger.

Maria Tomak is the coordinator of the Media Initiative for Human Rights in Ukraine. The views expressed in this piece are their own.

Photo by STR/NurPhoto via Getty Images

As Russia demands legal guarantees from the West, is Georgia on anyone’s mind?