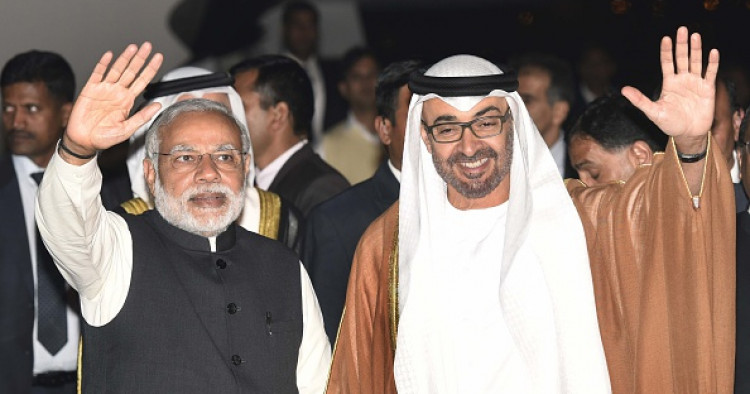 India’s interests and capabilities extend well beyond the subcontinent. This essay is part of a series that explores the geopolitical dimensions, economic ties, transnational networks, and other aspects of India's links with the Middle East (West Asia) -- a region that plays a vital role in India’s economy and its future. More ...

Since Narendra Modi became prime minister in 2014, Indian foreign policy has witnessed significant changes in approach, priority issues, and focus. The relationship with United Arab Emirates (UAE) is at the core of an assertive new Gulf policy subsumed under the “Extended Neighborhood Policy.” Mutually reinforcing economic visions and compatible geopolitical outlooks have laid the basis for a more robust and promising partnership between India and the UAE.

Pathway to the India-UAE Strategic Partnership

Since the establishment of India-UAE diplomatic relations in 1972, the scope of bilateral relations has widened and the level of engagement has increased significantly[1] — no more so than during the past several years. Prime Minister Modi’s visit to the UAE in 2015 led to a slew of agreements aimed at strengthening economic, defense, security, and law enforcement cooperation.[2] The momentum was reinforced by the visit to New Delhi Crown Prince Sheikh Mohamed bin Zayad Al Nahyan on the occasion of the 68th Republic Day Celebration the following year.[3] The Crown Prince was accompanied by high level delegation comprising Cabinet Ministers, senior officials and business leaders and culminated in the signing of the Joint Statement on the Comprehensive Strategic Partnership Agreement.[4]

The recent developments in India-UAE relations stem from shared economic visions and compatible regional geopolitical outlooks. UAE’s national aspirations and priorities are outlined in “Vision 2021,” which was promulgated in 2010. This document mapped six priority areas for attaining its development objectives: a cohesive society with its distinct identity, public safety and sustainable environment and infrastructure with world class healthcare and education system to turn the country into a competitive knowledge economy for a desired outcome of peace, security and prosperity with dignity.[5] Nearly a decade later, Abu Dhabi released “Economic Vision 2030,” a long-term economic diversification strategy focused on advancing knowledge industries by building a skilled workforce, world class infrastructure, and an efficient globally integrated business environment.[6]

The Emirates’ plans to develop a diversified, knowledge-based 21st century economy have dovetailed with the Modi administration’s blueprint for unleashing India’s economic potential. The promotion of economic engagement is a vital component of foreign policy of the Modi government. The “Neighborhood” and “Extended Neighborhood” policies form the bedrock of the Modi administration’s efforts to pursue this engagement. India’s relations with UAE forms the pivot of its policy in the region.

Recent progress in the development of India-UAE relations stems also from broadly compatible geopolitical outlooks and shared security concerns. Both sides recognize that the security of the Gulf and the Indian Ocean are indivisible. They also appreciate the threat posed by non-state violent extremists to their respective interests. This common understanding provides a basis for dialogue and concrete forms of defense cooperation in maritime security, counterterrorism, and other areas.[7]

In his Independence Day speech in 2020 Prime Minister Modi touted the progress that had been made in strengthening ties across multiple domains with the countries of West Asia.[8] This progress is most evident in the areas of investment, advanced technology and the knowledge economy, and integrating Gulf-Indian Ocean security.

The UAE is regarded not only as a major trade partner but also as a valuable source of foreign direct investment (FDI) in the Modi administration’s drive to develop a $5 trillion dollar economy.[9] The Emirates’ investments have topped $9 billion, making it the 10th-largest source of FDI in India.[10] Officials and business leaders on both sides see great untapped potential and a huge appetite to invest in India.[11]  [12]

The UAE-India High Level Task Force on Investment is the key forum to promote economic ties and accelerating engagement between the two countries. With the signing of Comprehensive Strategic Partnership in 2017, the Task Force acquired new significance in facilitating investment by addressing the issues of mutual concerns with trust and shared vision. The special UAE PLUS desk and the Fast Track Mechanism have played crucial roles in facilitating investment.

Since its founding in 2015, UAE-India Business Council has worked to facilitate economic synergy and create a better business environment.[13] In 2019, the two sides issued a joint statement on creating a single window for all Emirati investments and a fast-track process for UAE companies seeking to invest in India.[14]

For its part, UAE is seeking potentially lucrative destinations for Sovereign Wealth Fund (SWF) investments — and India is regarded as one of them. Last June, Mubadala (an Emirates’ SWF) invested $1.2 billion in Indian telco and digital services firm Jio Platforms.[15] Abu Dhabi Investment Authority (ADIA), the United Arab Emirates’ biggest sovereign wealth fund, sees India (and China) as key growth drivers and targets for outward investment.[16] The India-UAE Food Corridor has attracted $5 billion  in proposed investments from the Emirates,  in India’s mega food parks, farming logistics, warehousing, and fruit and vegetable hubs.[17] To attract such funds, India has proposed a 100% tax exemption from their interest, dividend, and capital gains income in respect of investment made in infrastructure and other select sectors before March 31, 2024.[18]

2. Advanced Technology and the Knowledge Economy

In 2018, in an effort to keep pace with the changing technological imperative to attain their national aspirations, India and UAE signed a Memorandum of Understanding to generate an estimated $20 billion in the span of a decade. According to Deepak Bagla, the Managing Director and CEO of Invest India, “India — the world’s fastest expanding market opportunity, with its talent pool of human capital, well acknowledged for innovation and UAE — a hub of cutting-age technologies — are natural partners in the field of Artificial Intelligence.”[19]

The Emirates have stepped up efforts to “invest” in the development of the knowledge economy by expanding “golden visa” residency permits in order to attract the best minds to the country so as to fuel the knowledge economy. These ten-year visas are granted to doctors, engineers, PhD scholars and specialists in high-end technology fields such as artificial intelligence (AI), Big Data, virology and epidemiology.

Space — the next frontier for gaining power and achieving prosperity — is a new arena in which India and the UAE have collaborated through the work of the UAE Space Agency (UAESA) and the Indian Space Research  Organization (ISRO). Space cooperation between India and the UAE gained quick momentum  during Prime Minister Modi’s visit to the Emirates in 2015. Together, the two space agencies have developed the nano-satellite, Nayif-1, which was launched from the Satish Dhavan Space Centre, Sriharikota in India.[20]

The two countries are likely to work together on Emirates’ ‘Red planet Mission’.[21] K. Radhakrishna, former head of ISRO who later joined UAESA, was instrumental in developing the Emirates’ Mars Hope Probe, which was launched July 2020 from Tanegashima Space Centre.[22]

Defense cooperation between the two nations has grown fast since 2003, when the Chief of Staff of UAE armed forces visited India. The visit and subsequent exchanges led to the holding of the Desert Eagle bilateral exercises between the Indian Air Force (IAF) and the UAE Air Force (UAE-AF). These exercises have boosted India-UAE security preparedness and coordination.[23] Similarly, the maiden joint naval exercise (Gulf Star-1), which took place in 2018, are sure to lay a strong foundation for maritime security cooperation.[24]

The Annual Defense Dialogue has served as a valuable vehicle for boosting defense cooperation. Defense cooperation is steered through a Joint Defense Cooperation Committee at the Ministry level and Naval Staff Talks at the HQ level. A large delegation of UAE Ministry of Defense officials participated in the February 2019 Aero India in Bengaluru. In December of that year, India’s Vice Chief of Air Staff led the delegation to the 9th Dubai International Air Chiefs’ Conference and Air Show.[25] The momentum appears to be building for the development of a robust security partnership.

India-UAE relations has become a pivot of India’s Extended Neighborhood and Look West Policy in the region. Shared economic visions and geopolitical outlooks have spurred the two sides to seek to expand cooperation across multiple domains, notably in investment, technology and the knowledge economy, and defense and security. The recent signing of The Abraham Accords[26] have created a fresh opportunity for even greater India-UAE coordination and cooperation. During his recent visit to the UAE, Dr. S. Jaishankar stated that the Accords would enhance the Emirates’ position as a logistics hub for Asian economies, including that of India[27] — another promising sign that the India-UAE is poised to climb to new heights.

[2] MEA, “Joint Statement between the United Arab Emirates and the Republic of India,” August 17, 2015, https://www.mea.gov.in/bilateral-documents.htm?dtl/25733/Joint_Statement_between_the_United_Arab_Emirates_and_the_Republic_of_India.

[8] Government of India, Office of the Prime Minister, Press Information Bureau, “English rendering of Prime Minister Shri Narendra Modi’s address to the Nation from the ramparts of the Red Fort on the 74th Independence Day- August 15, 2020,” August 15, 2020, https://www.pib.gov.in/PressReleasePage.aspx?PRID=1646045.

[14] Embassy of the United Arab Emirates, New Delhi, Press Release, “Signing of
Joint statement on setting up of a Fast Track System for UAE Companies in India,” January 9, 2019, https://www.uaeembassy.in/theembassy_press-releases_AAAB-FTS2019.htm.