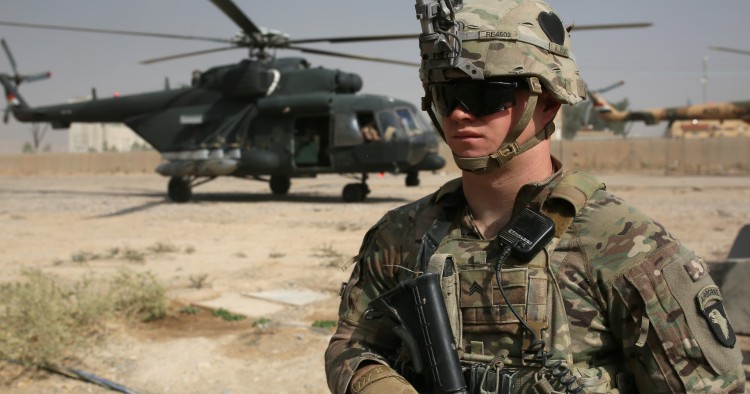 Shortly after Iranian President Hassan Rouhani’s landmark March 11 visit to Baghdad, Iraqi Speaker of Parliament Mohamed al-Halbousi toured Washington to thank the U.S. for supporting his government’s war against ISIS. Speaking with reporters on March 29, Halbousi praised the U.S.-led coalition for providing intelligence assistance to Iraqi Security Forces (ISF) and added that terrorists are the primary benefactor of those seeking to damage the U.S.-Iraqi security partnership.

However, Iraqi militia leaders and legislators quickly undercut Halbousi’s effort to maintain U.S. support for Iraq’s war against ISIS. Only three days later, MP Walid al-Sahlani said that his pro-Iran Fatah Alliance, parliament’s second-largest list, “categorically rejects the presence of foreign combat troops” as lawmakers in Baghdad discussed legislation to expel the approximately 5,200 U.S. troops from the country. Following President Donald Trump’s poorly received December visit to al-Asad air base, Qais al-Khazali, the leader of Asaib Ahl al-Haq, a militia that killed five US soldiers in 2007, warned: “If they [U.S. troops] do not leave, we have the experience and the ability to remove them by other means that your forces are familiar with.”

Denunciations of U.S. forces by Iraqi lawmakers have influenced attitudes in Washington. Michael Knights, a senior fellow at the Washington Institute, who maintains close contact with U.S. officials in Iraq, noted, “If we are being shaken down and our pockets turned out just at the dubious pleasure of keeping our troops there instead of being home with their families, what are we really doing there?”

With ISIS launching dozens of attacks during the past year across Iraq, Halbousi and President Barham Salih noted that Iraq needs the U.S.-led coalition’s help to eliminate the terrorist threat. Domestic divisions, however, have muddled the messages of top officials in Baghdad and Washington looking to maintain U.S. military support for ISF. Although it does not seem likely that Iraq will expel U.S. troops at the moment, the multiple diplomatic crises between Baghdad and Washington in recent months have laid the groundwork for a dramatic policy shift.

Additional bilateral flare-ups — whether due to Trump’s disrespect for Iraqi sovereignty or an Iraqi militia strike on U.S. forces — could lead to the end of the U.S. military mission in Iraq. This would leave Baghdad vulnerable, as it was in early 2014 after the U.S. withdrawal in 2011, without the necessary intelligence gathering and precision strike capabilities to combat ISIS on its own. In such a case, the threat of an ISIS resurgence would loom large.

Diplomatic ties and the Basra attack

An internal Iraqi split has already disrupted U.S.-Iraqi diplomatic ties. During massive September demonstrations over poor government services in Basra, three Katyusha rockets were fired at the compound housing the U.S. consulate, but did not injure U.S. personnel. The State Department suspended operations at the consulate in response, blaming pro-Iran militias for increasing security threats.

Iraq’s Foreign Ministry expressed regret in September over the mission’s closing, and at a February Al-Monitor event Iraq’s ambassador to the U.S., Fareed Yasseen, urged, “If you can relay that message to anyone in the State Department: Please send your consul back to Basra.”

This conciliatory outreach was opposed by Abu Mahdi al-Muhandis, deputy chairman of the Popular Mobilization Forces (PMF), a coalition of mostly Iraqi Shi’a paramilitaries. In September, amid widespread chaos, including the torching of numerous party offices, Muhandis alleged that “The U.S. consulate is involved in creating crises in the province.” The militia’s heated anti-U.S. rhetoric and rocket fire became intolerable for Washington. “Local nationals who interacted with the U.S. consulate general [in Basra] were being systematically targeted by militias,” noted Washington Institute’s Knights. “We left because they couldn’t protect us.”

The decision to close the U.S. consulate exemplified the Trump administration’s willingness to scale back the American presence in Iraq in the face of security threats. Washington’s April 8 designation of Iran’s Islamic Revolutionary Guard Corps (IRGC) as a terror organization will likely be a further irritant in U.S.-Iraqi ties and increase the threats against U.S. forces in Iraq going forward, as Tehran has called for expelling U.S. troops. IRGC’s commander, Mohammad Ali Jafari, warned shortly before the announcement, “If the Americans do such stupidity and put our national security at risk, the U.S. Army and security forces in the West Asia region [which includes Iraq] will not enjoy today’s peace.”

It is no coincidence that after Iran’s consulate was torched last September, militias fired rockets at the U.S. consulate in Basra. As Tehran looks to even the score with the U.S. for ramping up economic pressure on the regime, striking American forces in Iraq through one of its militia proxies could deter Trump from pursuing further punitive measures.

Given domestic fatigue over ongoing U.S. operations in Iraq, it is conceivable that Trump would evacuate U.S. troops, should a PMF rocket kill U.S. diplomats or soldiers in the country. President Ronald Reagan’s 1984 withdrawal of U.S. forces from Lebanon following a bombing would serve as a precedent for Trump, who lacks an attachment to Iraq and has repeatedly advocated for seizing the country’s oil.

The internal divisions souring ties have also plagued the U.S. side. The Pentagon has often stressed that its military mission aims to combat ISIS and came at Baghdad’s invitation — language designed to reassure Iraqis in light of the 2003 U.S. invasion and years of occupation.

However, President Trump offered an entirely different justification when he told CBS on Feb. 3 that the U.S. maintained bases in Iraq to “watch Iran.” The next day, Salih responded, warning his U.S. counterpart, “Don’t overburden Iraq with your own issues.” Salih insisted Baghdad is interested in preserving friendly ties with Iran and opposes Washington’s use of its territory as a battleground against Tehran.

Trump’s comments provided certain Iraqi lawmakers’ with justification to push forward with legislation to expel U.S. forces. While U.S. Ambassador to Baghdad Douglass Silliman insisted on Feb. 5th that American forces were in Iraq to help ISF defeat ISIS, without mentioning Iran, Trump’s admission made it more difficult for Iraqis to trust U.S. officials that they don’t have ulterior motives that clash with Iraq’s interests.

This was not the first time Trump upset Iraqis either. His December trip to visit U.S. troops at al-Asad air base was perceived as a major slight. Trump neglected to meet with a single Iraqi official while in Iraq, adding fuel to the fire. Hamad al-Rikabi, spokesman for Muqtada al-Sadr’s bloc in parliament, said that Trump’s visit showed the need to “put an end to the frequent violations to Iraqi sovereignty by the American government and to issue a decision to get the American forces out of Iraq.” If Trump manages to offend Iraqi national honor again in the months ahead, it may accelerate efforts to expel U.S. forces to a point of no return.

By contrast with the president, the Pentagon and the State Department have pursued a notably different strategy of directly engaging with Iraqis in an effort to show their respect for the country’s sovereignty. This was on display when Brigadier General Austin Renforth drank tea in one of Baghdad’s crowded neighborhoods or when U.S. embassy officials in Baghdad worked to boost Iraqi civil society.

Conflicting U.S. messages regarding occupied territories have also alienated Iraq. Secretary of State Mike Pompeo demanded in February that Russia “end its occupation” of Crimea and adhere to international law. Only a month later, however, Trump recognized Israeli sovereignty over the Golan Heights, despite UN Security Council Resolution 497’s rejection of Israel’s Golan Heights annexation. For the Iraqi public, this was a glaring case of hypocrisy.

Following Trump’s announcement, the Iraqi Foreign Ministry stated that “Iraq strongly opposes the legitimization of the Occupation of the Syrian Golan,” which necessitates “punishment for its perpetrators.” It is clear that Trump’s provocative declaration about the Golan Heights has damaged his efforts to win Iraqi support for maintaining U.S. troops in the country.

Potential for action on both sides

While analysts have focused on the Iraqi side of the equation, if the legislation to expel U.S. troops gains momentum in Baghdad, it could prompt Washington to take dramatic action of its own. Trump recently cut aid to Ramallah after lamenting that Palestinians showed “no appreciation or respect” to the U.S. It’s possible that Iraqi lawmakers’ attacks on the U.S. military presence and perceived lack of appreciation for Washington’s military aid for the ISF, totaling hundreds of millions of dollars annually, could prompt Trump to announce a unilateral withdrawal of U.S. forces by tweet. Such an announcement would likely not differ much from the president’s stunning December message vowing to withdraw U.S. forces from Syria.

Despite the many obstacles, the U.S. and Iraq continue to work together to combat the threat of ISIS, and security elites in Baghdad and Washington understand the importance and value of the relationship. Yet, populists on both sides have repeatedly tested the others’ will in a dangerous game of chicken. At ISF’s request, Iraq’s prime minister maintains a U.S. military presence, but without a political base, his power is limited should militia leaders and lawmakers decide to step up their efforts to expel American forces.

In Washington the scenario is reversed. The U.S. foreign policy establishment patiently works to preserve the relationship with Baghdad, while the president has repeatedly provoked Iraqis, seemingly unconcerned with local sensitivities. If actors on both sides aren’t careful, the tightrope-balancing act of Iraqi-U.S. collaboration against ISIS could quickly fall apart, either because of a PMF rocket or a Trump tweet.

Aaron Magid is an Iraq analyst at Tesla Government. A former Amman-based journalist, his articles have appeared in Foreign Affairs, Foreign Policy, and Al-Monitor. The views he expresses are strictly his own.