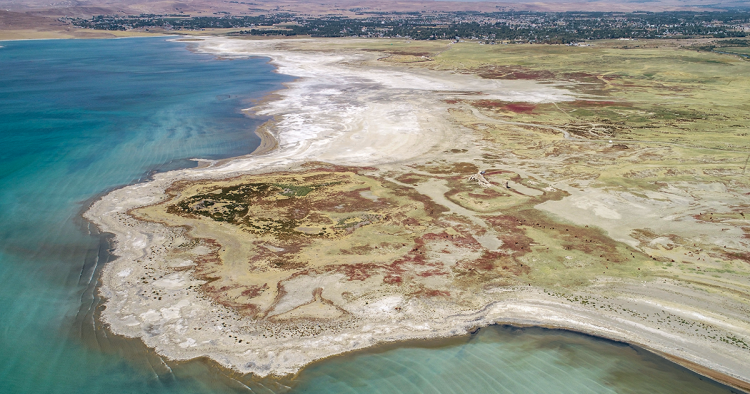 The Intergovernmental Panel on Climate Change (IPCC) released their Sixth Assessment Report on the Physical Science Basis of Climate Change in August of this year. This report brings together the latest advances in climate science, observations, paleoclimatology, and climate simulations to provide the most up-to-date physical science understanding of climate change. The report also describes the anthropogenic influence on the current state of climate and how future climate can distinctly affect different regions across the world.

With the start of the 26th United Nations Climate Change Conference (COP26) meeting only days away, the key messages from this report and its particular findings with respect to the Middle East are worth revisiting as they give an added sense of urgency to the COP meeting’s primary goal of slashing global emissions in order to achieve net-zero carbon by mid-century.

The IPCC Sixth Assessment Report on the Physical Science Basis of Climate Change provides strong messaging on how the last few decades of human activity and behavior have shaped the current state of climate. With the use of climate projections, the report illustrates how continued human influence will play a role in future climate. These findings establish an understanding of current and future climate, and pragmatically describe what is required to limit the consequences of climate change on our planet.

Human activities have unequivocally been the cause of global warming in the atmosphere, land, and oceans. This has been evidenced by observations of greenhouse gas concentrations in the atmosphere and global surface temperatures, both of which have steadily increased since 1750 and 1850 respectively. In fact, the rate of increase in global surface temperatures over the last five decades (since 1970) is unprecedented in the history of global temperature ranges spanning the last 2,000 years. Temperatures from the last decade (2011-20) exceed the most recent warmest multi-century period, which occurred approximately 6,500 years ago. Climate models help illustrate that changes in global surface temperatures simulated using human and natural factors are larger than those using only natural factors (e.g. solar and volcanic activity), culminating in a difference of over 1 degree Celsius in 2020. The stark difference between the two simulations of global surface temperatures from 1970 and onwards clearly corroborates that observed warming is driven by emissions from human activities. Other observed changes in climate and weather have been significant over the last century, particularly after the 1950s. These include faster rates of sea level rise, more frequent and severe heat extremes (such as heatwaves), and the higher frequency of extreme events (e.g. heavy precipitation and cyclonic activity).

Emission scenarios projecting into the future from 2015 through 2100 with varying levels of greenhouse gas emissions (i.e. low to high) paint a clear picture of how climate change will continue to evolve in the current century as driven by human influence:

Since the link between cumulative anthropogenic carbon emissions and global warming has proven to be a direct correlation, restraining climate change impacts associated with a warmer future necessitates curbing and reducing greenhouse emissions at an aggressive pace. The pathway to stabilizing global surface temperature increases due to human activity is through achieving net-zero global carbon emissions (by balancing the anthropogenic emission and removal of carbon).

The report further explores the future impact of climate change across the globe through regional implications for specific sub-regions. For each of these sub-regions, the localized effect of incremental increases of global warming (1.5, 2, and 4 degrees Celsius respectively) on seasonal and annual temperature and precipitation is quantified, and other relevant outcomes due to these global temperature projections are described. Five of these global sub-regions are associated with the Middle East and North Africa region: the Mediterranean, the Sahara, the Arabian Peninsula, Western Central Asia, and the Arabian Sea.

The Mediterranean sub-region incorporates all coastal regions along the Mediterranean, including North Africa, the Middle East (the Levant), and Europe. This coastal band around the Mediterranean Sea (particularly in North Africa and the coastline between Egypt and Turkey) has already observed progressive intensification of droughts (hydrologically, ecologically, and agriculturally). Projections for this sub-region with more warming include further aridity and drought (due to less precipitation) that enhances fire weather conditions (and encourages the occurrence of wildfires). These projected outcomes are also coupled with significant sea level rise by mid-century at global warming that exceeds 2 degrees Celsius.

The Sahara sub-region extends from Mauritania to Sudan and from the Sahel to the north of the continent (excluding the coastal regions along the Mediterranean). While surface temperatures for this traditionally arid region are expected to increase, heavy precipitation is also likely to occur with greater frequency. This intensity of precipitation activity will also generate more flooding events for this region.

The greater Indian Ocean (including the Arabian Sea) has experienced warming at a rate that is faster than the global average. Sea surface temperatures will continue to climb with higher levels of global warming. In addition, the continued warming of the oceans will fuel sea level rise for surrounding landmasses well into the latter part of this century.

Climate Change Implications for the Middle East and North Africa

The regional impacts of climate change for these sub-regions within the Middle East and North Africa are worrisome solely from the perspective of how local temperature and precipitation are projected to change. But when these projections are viewed in the context of current environmental and sustainability challenges, potential future outcomes for the region can appear rather foreboding.

The dichotomy of hot and dry conditions in the Sahara region paired with more frequent and heavy precipitation may seem beneficial as the enhanced rainfall could periodically alleviate episodes of drought. But intense precipitation events in this arid zone increase the likelihood of floods. More so, the frequent heavy precipitation and flooding can complicate existing transboundary management challenges for a key river system in this region: the Nile River Basin. The delicate balance of attempting to maximize hydropower generation from Ethiopia’s Grand Ethiopian Renaissance Dam (GERD) while meeting the growing water demands of downstream users in Egypt and Sudan will be near impossible to achieve if conjunctive reservoir management between these nations is not perfectly aligned. This particular future outcome due to climate change underscores the need for intra-basin coordination between these Nile River nations on reservoir operations, as it can mitigate the impact of pluvial floods while still meeting regional water demands from the river.

Irrigated areas along the Mediterranean coast in North Africa, the Levant, and Turkey will face multiple threats to sustainable agricultural production due to prolonged aridity of this coastal region in the future. Persistent drought will place pressure on other water supplies to meet the irrigation requirements of this region, at the risk of diminished agricultural production. And the danger of more wildfires and sea level rise can dramatically decease the availability of irrigable land that can sustain regional agricultural activity. The net outcome of all these implications is lower economic activity for the nations that depend on the agricultural industry operating in this coastal band of the Mediterranean.

Further warming of the Indian Ocean creates greater opportunity for the Arabian Sea to generate more tropical cyclones. With a higher frequency of cyclones being produced in the Arabian Sea, the likelihood that they will make landfall in surrounding landmasses (primarily the Arabian Peninsula) magnifies. The advanced levels of warming that the Indian Ocean will experience makes it quite probable that more severe tropical cyclones will emerge from the Arabian Sea. The obvious concern is that we might see more devastating cyclones hitting the Arabian Peninsula, the Horn of Africa, and Iran/Pakistan at severity scales reminiscent of Cyclones Gonu and Shaheen.

Several rivers in the Middle East originate from high elevation mountain regions and are thus reliant on snowmelt as a primary component of runoff generation feeding into these rivers. Reduced snowpack in the headwaters of these regional rivers due to climate change can substantially diminish annual streamflow (particularly during spring and summer snowmelt seasons). Examples of river systems that feed off winter precipitation and snow/glacier melt are the Amu Darya and the Tigris and Euphrates River systems. These rivers are a critical source of water for the countries within their watersheds. Water from these rivers supports agricultural production and hydropower generation, injecting economic growth for riparian communities. A decline in seasonal to annual river flow because of impacts to snowmelt at the headwaters of these rivers can be the added tinderbox that triggers further conflicts over water supply between neighboring transboundary nations with already tenuous geopolitical relations (e.g. Turkey, Syria, Iraq, and Iran on the Tigris and Euphrates River Basin).