As Iran redeploys amid COVID-19, Russia is filling the vacuum in eastern Syria 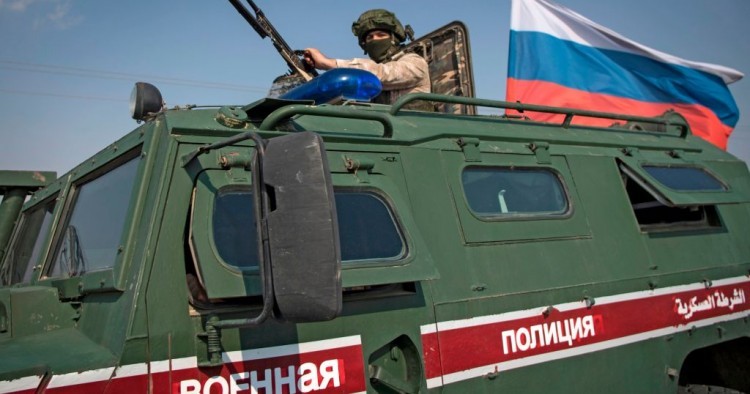 Despite efforts by the Assad regime and Iran to downplay and hide, it is now fairly well documented that the coronavirus outbreak in Syria initially hit Iranian fighters and Iranian-supported units hardest. By April 12, 40 pro-Iranian militia fighters had been taken to hospitals in Syria with COVID-19. Meanwhile, medical staff at a hospital in Abu Kamal — a major crossing town on the Syrian-Iraqi border and one now under the heavy influence of Iran — were threatened by regime and Iranian troops not to disclose the presence of cases. This calamity afflicting Iran-linked forces in Syria has provided Russia with an opportunity to expand its influence through its proxy forces, particularly in eastern Syria, as Iranian and pro-Iranian forces redeploy elsewhere in the country.

Russia reacted to the reports of coronavirus cases among pro-Iranian militias by ordering both Russian troops and Syrian regime units supported by Russia to separate from Iranian militias in mid-March, in a move that demonstrated how seriously Russia took the consequences of an outbreak among pro-government fighters and soldiers in Syria at a time when the Syrian government was still denying the existence of cases in the country. Another opposition source reported that Russian troops repositioned in late April away from the Bustan al-Qaser neighborhood in Aleppo, known as a stronghold for pro-Iranian militias in the city. Assuming the reports are true, the move to insulate pro-Russian Syrian units demonstrates a degree of foresight by Russia, with the assumption that having un- or less-infected units post-COVID-19 would be an advantage. The irony is that Russia appears to have dealt with the coronavirus outbreak in Syria more decisively than in Russia itself.

At around the same time coronavirus cases were spreading through Iranian and pro-Iranian Syrian units, reports began to emerge of an Iranian “withdrawal” from Syria. At the beginning of May, Israeli sources began reporting that Iran was leaving Syria due to sustained Israeli airstrikes in the east of the country. Syrian government sources, however, officially denied that Iranian forces had left Syria, though this was to be expected. Moreover, several reports, including in Israeli media, indicated an increasing presence of Hezbollah fighters in southwestern Syria, particularly along the Israeli border. Meanwhile in eastern Syria, pro-Iranian Afghani fighters of the Fatemiyoun Brigade militia were reportedly moved away from Deir ez-Zor city and al-Mayadin in the same province south to the city of Palmyra and the Sayeda Zeinab suburb of Damascus. There are also rumors that frontline areas in western Aleppo and eastern Idlib provinces were being reinforced with pro-Iranian militias.

The reality is that Iran has not withdrawn from Syria but rather redeployed and repositioned Iranian and proxy forces throughout the country for a number of reasons. Undoubtedly, the sustained deadly attacks by Israeli jets on Iranian sites in eastern Syria made a larger and overt Iranian presence in the area a liability. And at the same time, the outbreak of the coronavirus in Iran and increasing pressure from U.S.-led sanctions on Iran have imposed a financial strain that likely caused a rethink in priorities across the region. In eastern Syria in particular, Iran can also be viewed as having largely accomplished its goal of establishing significant presences in the border crossing town of Abu Kamal and, further up the Euphrates River, in al-Mayadin and Deir ez-Zor. As such, Iran likely calculated that it was best to shift its efforts elsewhere in Syria.

Russia has exploited Iran’s repositioning in Syria and moved quickly to fill the void left by these redeployed pro-Iranian militias. It was able to move its forces in Syria so quickly in great part because it had swiftly ordered its forces and Syrian government units and militias friendly to it to isolate from pro-Iranian forces early on in the outbreak. In Deir ez-Zor city, unnamed pro-Iranian militia units handed over control of a number of checkpoints to other Syrian forces under the supervision of Russian military police and the Jerusalem Brigade, the latter of which is supervised by the Wagner Group. The report is unclear whether Jerusalem Brigade units took charge of the checkpoints or merely supervised the handover. Either way, their presence in the handover is a signifier of the supplanting of Iranian influence by Russia in Deir ez-Zor city. It is also notable that the Jerusalem Brigade used to be a pro-government militia supervised by Iran but has now become a popular militia for Russia, deployed to Syria’s expansive desert region known as the Badia, likely as part of a planned offensive against ISIS cells in the area.

Further to the northwest, Russia stepped in when pro-government National Defense Forces (NDF) units complained that they hadn’t been paid by their Iranian and Syrian government patrons for a number of months. The NDF is a nationwide structure for some pro-government militias that focus on defending home areas and whose financial support varies throughout the country. In late April or early May, several dozen NDF fighters and commanders stationed in southern Raqqa Province met in the town of Maadan, situated along the Euphrates River, and declared their intention to go to Russia to ask for salary payments. Notably, they cited the coronavirus as the reason why they assumed payments from Iran’s Islamic Revolutionary Guard Corps had ceased. By mid-May, Iranian-supported forces had withdrawn completely from the Maadan area as pro-Russian NDF units and Russian military police deployed there.

So why does it matter?

It now seems clear that Iran is repositioning within Syria, rather than withdrawing, and that this is a result of a combination of factors, including the coronavirus. The repositioning should be viewed as a shift in priorities away from the east of Syria to the southwest, closer to Israel. It is likely that Iran felt that it had achieved its main objective of securing al-Mayadin and Abu Kamal and that paying for troops to stay there and get routinely hit by Israeli air strikes was no longer worth it. Further, the fact that NDF units in southern Raqqa did not receive their salaries for several months indicates that they were not a priority for Iran in the wake of the pandemic and that it was best to cut its losses in that area.

Furthermore, Russia demonstrated that it is ready and willing to quickly fill the security void left by Iran with Syrian units friendly to it. Competition over influence in eastern Syria has been ongoing for some time and while this isn’t the end of the fight, it does signal a tipping of the scales toward Russia. Moreover, the persistent presence of Russian military police at the handover operations is a sign that these units are perhaps the closest thing to a neutral force in Syria, having been deployed during security breakdowns in coastal areas, monitoring cease-fires in northern Aleppo Province, and even in the tense Daraa Province.

Nick Grinstead is a non-resident scholar with the Middle East Institute's Syria program. He has been researching the dynamics in regime-held Syria for several years now, first as a researcher for the Clingendael Institute in The Hague, where he provided research and policy advice for the Dutch government and the European Union. In particular, he looks at the relations of loyalist militias to the state and with foreign patrons. He also works as a Senior Regional Security Analyst for Le Beck International, a Middle East based security and risk consultancy. The views expressed in this piece are his own.