In Iraqi Kurdistan, there’s more than just tea brewing in the teahouse 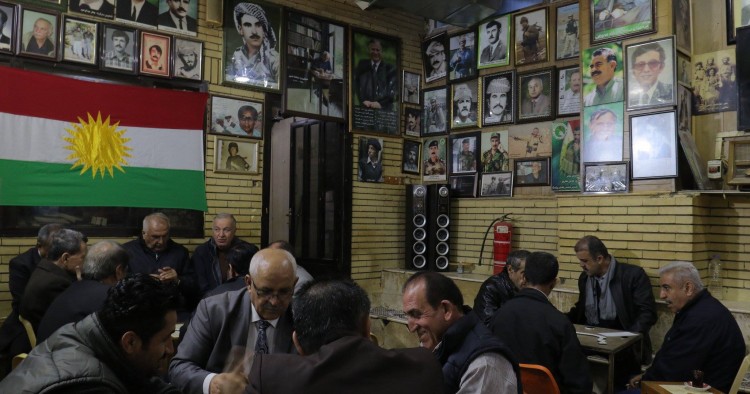 “Never trust a man who doesn’t drink tea,” a Kurdish teahouse owner said with a toothy grin. Iraqi Kurds consume on average 1.5 kilograms of tea per year, making it the most popular beverage after water. The chaikhana, or teahouse, is the traditional location for men to drink gallons of sugary tea, discuss news, and share ideas. Even today, it remains a multipurpose space, as much a place to play dominos as one to argue over politics.

Second only to the mosque, the teahouse serves as a key public space for Kurdish men. Specific customs are shared among all teahouses. For example, tea can be ordered with plenty of sugar already mixed in (sheereen) or without, with a side of sugar cubes (djlema). Either way, tea is always served in the traditional tulip-shaped glass (piyala). Some Kurds pour their tea into a saucer (zher piyala) so that the tea cools and can be drunk immediately.

In the villages that dot Iraqi Kurdistan’s porous border with Iran, people from all walks of life can be found in local teahouses. Members of the peshmerga, the Kurdish military forces, meet one another for a brief respite and exchange of information, sitting next to Kurdish smugglers who use the teahouse as an outpost to plan their illicit cross-border activities.

Frequenting teahouses is a custom that bind together Kurds in rural and urban areas alike. Irbil and Sulaymaniyah are Iraqi Kurdistan’s two main cities and vie for dominance. While the former serves as the center of Kurdish politics, many consider the latter to be the region’s cultural heartland. Both cities host dynamic teahouses whose histories are linked to the Kurdish collective memory of struggle and oppression.

“Every quarter in Irbil had its own teahouse,” Lolan Mustafa, the director of the Kurdish Textile Museum in Irbil, explains. “In Irbil’s Jewish quarter, for example tea was served year round, even during Ramadan.” Teahouses were also organized around the different professions found throughout the bazaar. Mustafa elaborates, “Butchers had a chaikhana. The partridge sellers had their own. In the 1970s, there was one for the leftists and one for the nationalists.”

Machko Chaikhana is the most famous teahouse in Irbil, the capital of the semi-autonomous Kurdistan region, and at almost 80 years old, it may also be the region’s oldest. That said, Machko remains relatively youthful compared its neighbor, the old citadel of Irbil, a UNESCO World Heritage Site that was first settled 8000 years ago. When Machko opened in 1940, the teahouse was frequented by traditional storytellers who would meet there to tell tales and sing traditional songs. Today, photographs of prominent Kurdish politicians and intellectuals who frequented the teahouse line the brick walls. Hama, a young man who prefers Machko over the new cafes popping up across the city, says, “Sitting here reminds me of Kurdistan’s golden age of culture.”

Not all agree, however. Award-winning auteur Shawkat Amin, whose 2014 film “Memories on Stone” is a critique of the challenges of making a film in Iraqi Kurdistan, believes Machko’s management has sold out, prioritizing business over maintaining a space for Kurdish culture and tradition. “I used to be able to write my screenplays in Machko,” he said, “but no longer. The teahouse is now a façade of its older self,” meant for tourists, not artists.

In Sulaymaniyah, Chaikhana Shaab (the People’s Teahouse) is the city’s most important teahouse and remains a bedrock for the city’s arts and politics. The teahouse has served in many capacities including the unofficial headquarters of the Patriotic Union of Kurdistan (PUK), lodging for peshmerga, and a printing press for anti-Baathist material.

The staccato of domino pieces, chimes of stirring spoons, crashing sound of saucers, and din of lively chatter complete the daily soundtrack at Shaab. Bakr Sharif, whose father opened the teahouse in 1950, has worked there since he was seven years old: “On any day here, you can find residents of the city: politicians, intellectuals, artists, laborers, clerics, and regular folk.” Under Saddam Hussein and the Baathists, the much-feared intelligence services and Kurdish collaborators understood that Shaab was a “den of political frenzy,” Sharif elaborated. Bakr’s brother, Omar, recalls being in the teahouse when an infamous Baathist lieutenant barged into the teahouse: “(Lieutenant) Mohsen and his men started shouting and dragging men out. Many of them were sent to Amna Suraka,” the infamous Baathist prison in the center of the city.

Many Kurds in Sulaymaniyah, including the intelligentsia, became frustrated with the dominant Kurdistan Democratic Party (KDP)––then led by Mustafa Barzani––and its backroom deals with the Baathists. Agents would spy on these political agitators, who later founded the PUK as a counterweight to the KDP. “The PUK claimed Shaab to be their unofficial headquarters (after 1975),” Bakr says as he points to the sticky floor. Eventually, employees and patrons of the teahouse were able to spot these agents and adeptly switch their conversations to trivial topics. “Everyone would see them coming in and go back to playing dominoes,” Bakr says with a wry smile.

During the Iran-Iraq war, the PUK and their peshmerga fighters sided with Iran against the Baathists. Omar said, “At night, peshmerga came into the city and would deliver nationalistic pamphlets here.” The teahouse became an essential link between the PUK peshmerga and the people of Sulaymaniyah. As the war reached its apex in the late 1980s, Kurdish soldiers in the Iraqi military defected in increasing numbers. Bakr knew the fate of these defectors if they were discovered. He used the second floor of the chaikhana as a safehouse for up to 12 soldiers at a time. On one occasion, Baathists entered the teahouse demanding to go upstairs. Bakr improvised, making the second floor sound as unseemly as possible: “I just told them that there was a lot of dirt and storage equipment up there. I kept talking until they left.”  At that time, Mohammed Omer Osman, who would later become a famous poet and is now known as the General of Autumn, was hiding upstairs. Had things gone differently, contemporary Kurdish poetry would not have been the same today.

Regardless of the turbulence in Iraq, and beyond, the teahouse remains a reliable hub for politicians, artists, and city residents to meet, drink sugary tea, and discuss the issues of the day. Politicians, including Iraq’s new president, Barham Salih, have been seen in Shaab speaking with their constituents over a glass of tea. According to Omar, Jalal Talabani, the former head of the PUK and Iraq’s first postwar president, personally paid for much-needed renovations to the teahouse in 2004. Sherko Bekas, the city’s most famous modern poet, often sat in the corner of the teahouse, drinking and writing in a frenzy up until his death in 2013.

As in most public parts of Kurdish society, women have been traditionally excluded from participating in teahouse culture, as the teahouses are often located near or in markets and other hubs that are dominated by men. And although this is still very much the case, there have been signs of modest change in the last few years. Interestingly, breakfast has been the main reason for this shift. “I love their eggs,” says Lourd Hanna, when asked about Machko. “I have started to go with my friends there for breakfast. They now even have a few tables reserved for women during the morning rush.” Other teahouses have also begun to serve breakfast to attract a wider range of customers. On a Saturday morning at Chaikhana Aqari in Sulaymaniyah, the teahouse is bustling with women and girls who go with their families and friends to eat eggs and locally produced yoghurts, cheeses, and jams with cup after cup of sugary tea.

As Iraqi Kurdistan looks toward the future and changes in line with political, social, and economic trends in the region, a greater inclusion of women is welcomed by the political and cultural elements of Kurdish society. Others remain concerned about the changing fabric of tradition, with the chaikhana at the center of debate. Shawkat Amin argues, “The forces of modernism are literally tearing down historical places; even Machko is unsafe.” The clientele of traditional teahouses is greying. Kurds from the new generation prefer sleek cafes and hookah bars. If teahouses are to remain the vital touchstone they have been in the past, their importance for the future will have to be better communicated today.