ISIS and the Assad regime: Strategy and counter-strategy in Syria’s Badia 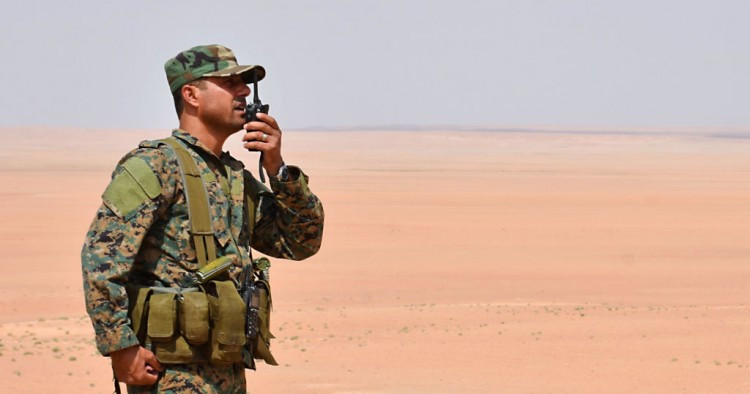 It has been more than a month since the launch of military operations by Syrian regime forces and their allies, with air support from the Russian air force, in the Syrian Badia — the country’s expansive central desert region — in an attempt to eliminate ISIS cells deployed there. To date, however, these operations have not yielded any tangible results.

The military attacks by the regime and its allies have not changed at the operational and strategic levels. They have been exclusively incursion operations carried out by ground forces armed with light and medium weapons. Russian warplanes provide air cover, proceeded by air strikes, while helicopters accompany the advancing forces on the ground in anticipation of counterattacks by ISIS.

Since its beginning in February, the operation in Deir ez-Zor has not made any progress in the governorate’s southern Badia region or near the city of Sokhna in the eastern countryside of Homs. If the operations continued in this manner, the Syrian regime and its allies would need a considerable amount of time to sweep the remaining desert areas in Homs, Hama, and the eastern Sweida Governorate, where ISIS is active.

Why hasn’t the operation shown results?

There are several reasons why the military operations have shown no tangible results to date, including the mentality of the attacking forces as well as ISIS’s handling of the attacks. The Syrian regime and its allies insist on waging a partial war in the Syrian Badia, aiming merely to secure its supply routes crossing the desert region, especially the route between Damascus and Deir ez-Zor, as well as that connecting Resafa and Ithriyah.

As the regime focuses on waging partial war in the areas surrounding its supply routes, this leaves ISIS a massive area spanning thousands of kilometers in which to retreat and avoid confrontation with regime forces and their allies, especially air forces that could easily eliminate ISIS fighters in the open desert.

The jihadi organization managed to avoid attacks in the Badia of Deir ez-Zor by carefully maneuvering and changing locations. ISIS withdrew from the targeted areas in the Badia, surrendering the Damascus-Deir ez-Zor road and moving its forces deeper into the desert near the junction of the borders of the governorates of Homs, Raqqa, and Deir ez-Zor. For the regime, these areas are not of particular interest, nor is the presence of ISIS within them deemed a threat. Moreover, attempting to raid these areas would be present a significant risk for the attacking forces given the complex terrain.

The withdrawal of ISIS from the Badia of Deir ez-Zor as a result of the military operation has had both positive and negative effects. The positive ones were favorable to the Syrian regime forces in the governorate: February saw a decrease in ISIS’s attacks in those areas by 90%. The positive results in the east of the Badia, however, came at the expense of negative impacts in the west, as ISIS intensified its attacks in the Homs and Hama Badias, which have reported the highest rates of attacks since the beginning of the year.

The partial war waged by Syrian regime forces and their allies is in line with a military tactic known as “leap-frogging.” This is based on the movement of attacking forces from one point to another in a series of “leaps” of a set distance. In this case, regime forces relied on leaps that reached up to 20 km, which are very long by military standards.

This tactic has generated major problems for regime and allied forces. The first problem is that, due to natural barriers such as mountains and valleys, executing such leaps require careful sweeping operations in order to secure those areas before carrying out the second step. Such operations are very time-consuming as well, thus delaying the progress of military operations. That explains the long period of time spent by regime forces — in excess of a month — to sweep a distance of 60 km in length and 170 km in width south of Deir ez-Zor.

The second problem is that the tactic of advancing rapidly through leaps leaves the attacking forces’ backs exposed. Consequently, they become vulnerable to ISIS counter operations targeting regime forces or their main operational support lines. Such was the case with the attack carried out by ISIS on Feb. 20, when it struck through its cells and penetrated the back lines of opposing forces, managing to kill four members of the Iranian Revolutionary Guard Corps inside a guard post near the Euphrates River in the city of al-Ashara.

Despite the military superiority of the regime and its allies over ISIS, ISIS has an important advantage that enables it to narrow the military gap: detailed knowledge of the geography of the Badia and the ability to maneuver within it, unlike the other parties that lack such knowledge. Moreover, given the extensive experience it has built up in Iraq and Syria, ISIS excels in desert warfare. By contrast, the regime and its allies possess guerrilla warfare skills that are specifically suited to the context of urban warfare, not the desert.

In time, a return to the offensive

ISIS will not continue maneuvering and retreating for long, however; this stage is a temporary one that is necessary under the current circumstances. In time, the group will return to attacking and spreading into areas from which it has previously withdrawn. This is based on the understanding that the opposing forces will not continue to attack forever, but will inevitably lose steam. It is just a matter of time.

The return of ISIS would mean the resumption of its long-term effort to wear down the regime and its allies. In this fight, the group bets on its mastery of long-running, unresolved confrontations that lack clear prospects for victory or defeat. As such it will repeat its previous experience in the stage of retreat in Iraq before 2010.

The aim of ISIS, currently and in the near future, is to erode the power of its opponents in the Badia. To do so, it will harass and destabilize them, dividing them physically, chipping away at their morale, and attacking them from unexpected directions. In doing so, the group will apply the strategy of indirect confrontation that it has been developing since its collapse in 2017, which enables it to avoid casualties in its ranks and allows it to wait for a favorable opportunity to return to the forefront of events, as happened earlier in Syria and Iraq.

Mohammed Hassan is a university student at the Faculty of Law, Department of International Law. His writings focus on the regions of northern and eastern Syria, especially extremist Islamic groups and tribal societies. He writes for a number of Arab newspapers, including the Lebanese newspaper al-Modon and Daraj website, and has written at Chatham House since 2016. You can follow him on Twitter @mohammed_nomad. The views expressed in this piece are his own.