Israel and China: The Bloom Is Off the Rose 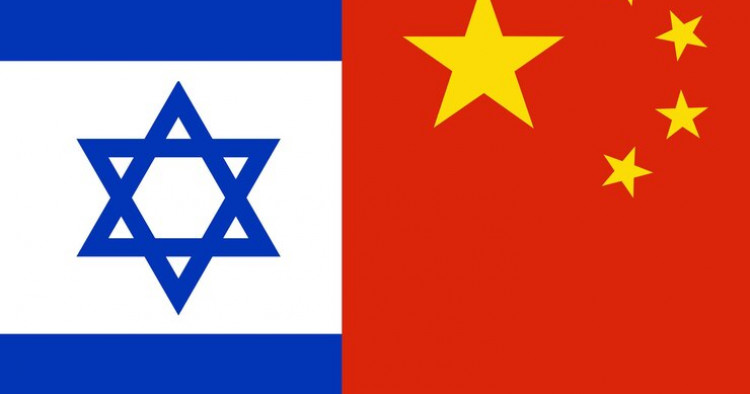 This piece is part of the series “All About China”—a journey into the history and diverse culture of China through short articles that shed light on the lasting imprint of China’s past encounters with the Islamic world as well as an exploration of the increasingly vibrant and complex dynamics of contemporary Sino-Middle Eastern relations. Read more ... See also the series on Israel: The Future is Asia.

Israel was the first country in the Middle East to recognize the People Republic of China (PRC), in 1950. Although the two states did not normalize their relations until 1992,[1] since then the bilateral relationship has developed extensively, especially in the economic sphere.[2] As Yellinek has established, “Starting in the early 2000s, ties between the two countries began to blossom, mostly because the Chinese government started to view Israel as a global technology hub and began seeking to capitalize on Israel’s innovation capabilities to help meet its own developmental needs and strategic challenges.”[3]

However, as this article demonstrates, the future of this bilateral relationship is clouded by Israel’s security concerns about growing Chinese involvement in the country’s critical infrastructure and hi-tech sectors, heightening strategic competition between China and the United States, skepticism about the prospects for building more robust economic ties, and the erosion of Israelis’ favorable opinions of China.

In recent years, Chinese companies have been involved in upgrading Israeli ports and in building infrastructure such as the Tel Aviv light rail. Most of these projects are associated with the Belt and Road Initiative (BRI). Although China invested in Israel before the BRI was launched, as Galia Lavi has emphasized, “the BRI provided the conceptual framework and brought Chinese government financial and diplomatic support into the picture.”[4] Lavi argues further that Chinese companies did “not necessarily win infrastructure tenders due to preferential treatment by Israel, but rather due to fewer foreign competitors” as it was for example in operating Haifa’s Bayport Terminal, where the Chinese company “was the sole bidder.”

Though Israel has benefited from such cooperation with Chinese companies, government officials nonetheless have been concerned about, and reluctant to allow any foreign companies — not just Chinese enterprises — to control key infrastructure. Therefore, Israeli authorities have decided to maintain control over “network management and electricity provision,” permitting foreign companies to manufacture only a limited amount of electricity. Regarding ports, the Israeli government has procedures that ensure it remains “in charge of management, maintenance, and development of the ports.”[5]

The red-line light rail in the Tel Aviv area is about 150 meters from the headquarters of the Israeli military. This poses a security risk. In January 2019 Shin Bet chief Nadav Argaman, warning that Chinese investments could pose security risks, called for legislation to oversee Chinese involvement in the country’s infrastructure projects.[6] Israel, which is highly sensitive about its national security, subsequently took steps to prevent and at least to reduce the damage Israel might absorb, following its ties with China.

One cannot assume that China would act against Israeli interests. However, if the bilateral relationship were to sharply deteriorate, this eventuality cannot be ruled out. China might also, whether purposefully or unwittingly, provide an enemy of Israel vital information that could be used to cripple the country’s infrastructure — a possibility that, however remote, must be taken seriously.

The 2022 U.S National Security Strategy (NSS) prioritizes “maintaining an enduring competitive edge over” China.[7] What, then, are the implications of Washington’s assignment of such high priority to strategic competition with China for MENA countries, notably Israel?

Chaziza has written that “The global US-China great power confrontation stands to change the Middle East landscape.” He goes on to state that MENA countries “face a complex geopolitical and commercial calculus, with new pressures on managing their national security and economic development. The intensifying competition complicates their efforts to maintain ties with these powers in various ways and forces them to choose between keeping the security partnership with the US or strengthening their economic and technological partnership with China.”[8] These observations apply no less to Israel than to other MENA countries.

There is some evidence that Israel has taken steps to align its positions with those of Washington. For example, in late June 2021, Israel joined with the United States in the UN Human Rights Council’s condemnation of China’s inhumane treatment and forced incarceration of its Uyghur minority.[10] It is noteworthy that in taking this stance Israel brooked warnings from China[11] while Egypt and other Muslim-majority countries remained silent in the face of repression of Chinese Muslims.

There are other focal points of US-China strategic competition where Israel’s task of managing relations with the US and China are somewhat trickier. Foremost among them is the issue of Chinese investment in Israeli tech companies, which is largely unregulated. Yet, even on this issue, Israel has shown sensitivity to US concerns, and indeed shares such concerns. In fact, over the several years, ties between Israel’s tech sector and China have eroded.[12] In late September 2022, top Israeli and US officials met to discuss various technology issues such as artificial intelligence (AI). Their discussions reportedly centered on “‘trusted tech ecosystems’ — a code name for protecting sensitive technology from China.”[13]

Trade and Investment Ties Have Plateaued

Chaziza has noted that “major infrastructure projects, cutting-edge technology, and innovation have been the bedrock on which the China-Israel relationship” is based.[14] The Times of Israel recently reported that, “Israel imports more from China than anywhere else and exports more to China than any other Asian country. From 2011 to 2021, the share of Israeli exports to Asia going to China rose from 25% to 42%.”[15] Similarly, in a piece published in Mosaic in September, Orion wrote that “bilateral trade has grown from $50 million in 1992 to the $15 billion in 2021 (according to Israel’s Bureau of Statistics) or even $22.8 billion (according to China’s).”[16]

Yet, Orion went on to add, a “closer look at the data shows that in 2018 both Israeli exports to China and Chinese investment in Israel peaked. The former thereafter declined and then plateaued.”  The World Bank reported, also in September, that “amid multiple domestic and external headwinds, China’s GDP growth is expected to slow sharply to 2.8 percent in 2022, from 8.1 percent in in 2021.”[17] How quickly and how much China’s economy will rebound is anybody’s guess. The possibility of a prolonged Chinese economic slowdown does not augur well for injecting new vitality into bilateral trade and investment activities.

Until relatively recently, Chinese state media and Chinese diplomats had made progress in penetrating the Israeli media sector and shaping Israeli public opinion. As Yellinek has noted, China’s  influence operations included the use of “direct messaging to the Israeli public in local Hebrew-language newspapers, the use of Chinese outlets (especially the Hebrew department of China Radio International) targeted at Israeli audiences, and efforts to leverage prominent public figures friendly toward China to amplify favorable messages delivered on these local Israeli and Chinese platforms.”[18]

Since 2019, however, favorable views of China among Israelis have declined.[19] This shift in Israeli sentiment stems from a host of factors, including the public’s awareness of repression in China, Beijing’s initial mishandling of the COVID-19 pandemic, problematic if not antisemitic Chinese media reporting of the 2021 conflict with Hamas in Gaza, and repeated casting of votes against Israel in the United Nations.[20] The views of those otherwise positively disposed toward China have undoubtedly also been influenced by Beijing’s Iran policy — a policy that has provided diplomatic cover and an economic lifeline to Iran, and has laid the groundwork for a strategic partnership with a regime that continues to pose a serious threat to Israel.[21]

By late 2022 Israelis have come to recognize “the potential risk to Israel from [China’s] gray-zone technology transfers, the theft of data, economic dependency, and potential supply-chain problems. A rosy-eyed and carefree approach has gradually given way to a more sober one.”[22] Bilateral trade and investment have slowed, as has the Chinese economy, perhaps indicating that the peak years of Israel-China economic cooperation have passed. Israelis’ opinions are not nearly as favorable as they were even a few years ago. Meanwhile, Israel is facing increasing pressure by the United States to limit Chinese involvement in the Israeli economy. Together, these are clear signs that the ‘bloom is off the rose.’

[9] David Tal, The Making of an Alliance: The Origins and Development of the US-Israel Relationship (Cambridge University Press, 2022); and Robert Friedman, Israel and the United States: Six Decades of US-Israeli Relations (New York: Routledge, 2012).

[14] Chaziza, “Israel-China Relations in an Era of Strategic Rivalry and Great Power Competition.”