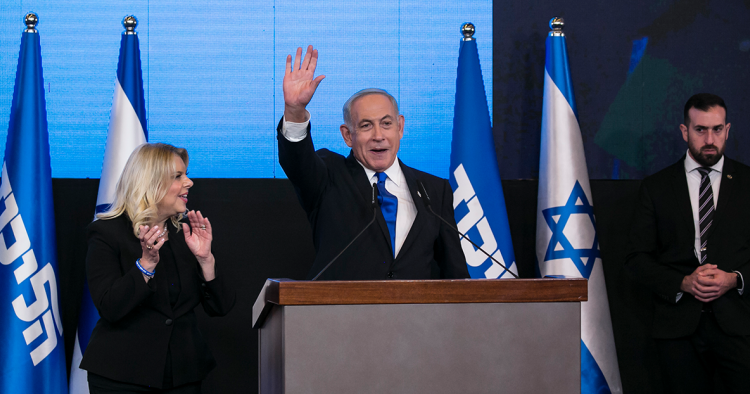 On Nov. 1, Israel’s democracy was shaken, perhaps as never before. It is not so much that former Prime Minister Benjamin (Bibi) Netanyahu has been returned to power; he is a known quantity. Rather, if he does become prime minister again, as seems overwhelmingly likely — returns are not quite final as of this writing — it will undoubtedly be with crucial support provided by the inaptly named party, “Religious Zionism.” The term itself has a long history as an integral, though small, part of the larger, predominantly secular, Zionist movement. This party, however, should more properly bear the name of one of its constituent sub-groups, namely “Jewish Power,” the vehicle of the veteran neo-Kahanist Itamar Ben-Gvir, who was convicted by an Israeli court in 2007 of incitement to riot and who has recently gained star quality on the very far right. Religious Zionism is poised to receive 14 seats, making it the third-largest party in the Knesset, which is already causing serious concern among Western governments.

This election presumably puts an end to Israel’s embarrassing string of five general elections in three and a half years, all in search of a stable majority government. Unusually, the stalemate was not based on ideology, because right-wing and religious sentiments now unquestionably have a solid majority in the population as a whole. Rather, the elections were all fought on the single question of whether Netanyahu should be returned to the office he held from 1996-99 and 2009-21. Following the collapse in June of a year-long anti-Netanyahu “Government of Change,” stretching politically from the denuded left to an Islamist party and even elements of the far right, most of whose major figures were former political partners or even ideological soulmates of Bibi, Netanyahu has again triumphed, with a likely majority of 65 in the 120-member Knesset for his presumed four-party coalition between Likud, Religious Zionism, and the ultra-Orthodox parties Shas and United Torah Judaism. Now the question is, how to divide the spoils of victory.

For Bibi, these spoils will be, first and foremost, ending the criminal case against him for bribery, fraud, and breach of trust, the trial of which has been going on since May 2020. It is expected that the Knesset will soon pass a law preventing the prosecution of a sitting prime minister, or some similar sleight of hand, to make the case go away. That will likely be only the beginning, however. Netanyahu’s supporters have cultivated a deep hatred for the country’s judiciary, seeing it as part of an out-of-touch cultural elite run amok. Measures proposed have included the right of the Knesset to overturn a judicial decision with a simple majority vote, politicization of Israel’s formerly admirable, non-political process for choosing judges, as well as weakening the powers of the attorney general to act in cases such as Bibi’s.

All that, however, will be the easy part. The more contentious elements are those that will be demanded by Ben-Gvir and his party in return for supplying Bibi with the majority that enables him to stay out of jail. In the past, Ben-Gvir has threatened Arabs with expulsion and called for a “Deportation Law,” to be enforced against anyone who, for example, throws stones at soldiers. More recently he has threatened to deport “disloyal citizens” (including Knesset members), urged the institution of the death penalty, advocated that the Palestinian Authority be shut down, and pushed for Israel to annex the whole of the West Bank.

None of this would be palatable to Netanyahu, as it would certainly affect his carefully cultivated relations with foreign nations, especially those Arab countries that have opened diplomatic relations with Israel under the 2020 Abraham Accords, one of his signature accomplishments. It is understood that the United Arab Emirates agreed on an implicit quid pro quo with Netanyahu at a moment when Israeli annexation of a portion of the West Bank was expected: recognition in return for no annexation. Thus, there may be little that Netanyahu could do to satisfy Ben-Gvir in the short run, other than to provide him with the job he seeks as minister of police. In that capacity it can be assumed that left-wing and Arab demonstrators will be met with a heavy, if not lethal, hand. However, early reports indicate one initial target of the new government may be Israel’s recent anti-gay conversion therapy law, to satisfy one of Religious Zionism’s factions, whose chief issue is opposition to Israel’s generally liberal LGBTQ+ policies.

An apparent casualty of the election is the left-wing, social-democratic-oriented Meretz party, which won 12 Knesset seats in the 1990s but which now seems to have just missed the electoral threshold of 3.25%, below which a party gets no seats and its votes are wasted. Meretz apparently missed the threshold by about 0.1%, while Balad, an Arab nationalist party, missed by slightly more. Between them, they received over 6% of the vote, so with a few thousand more votes for each, the familiar stalemate would likely have occurred, as the pro- and anti-Bibi parties received virtually the same number of total votes. Disorganization among the “antis” is being blamed for not having avoided this, with knives already out for the alleged culprits.

Israeli governments often take six weeks or longer to organize. In this case the negotiations might move more quickly because the pro-Bibi bloc is already clear and defections are unlikely. The very first order of business will presumably be to remove the criminal charges against Netanyahu. That done, the appointment of judges will likely be politicized and the powers of the Supreme Court and its alter ego, the High Court of Justice, will likely be diminished. Religious laws may be stiffened and the ultra-Orthodox will not have to teach their schoolboys math and English along with Jewish learning, as the previous government was trying to enforce.

It should be noted that nothing on that list directly affects Palestinians in the West Bank or Gaza. These are, of course, my guesses as to the new government’s priorities, but it is most likely, in the short run at least, that the main target of the new government will be Israeli democracy, not Palestinians. The current wave of nightly raids on alleged Palestinian militants in the West Bank will almost certainly continue, but this is not new.

In other words, Netanyahu is likely to govern as other current majoritarian populist leaders are doing: reining in the judiciary, buttressing his own position, and making sure the “nation” is protected. Meanwhile, Ben-Gvir will be inside the citadel. He has promised “Jewish Power.” What will he do with it? He is unlikely to be satisfied with Bibi’s priorities.