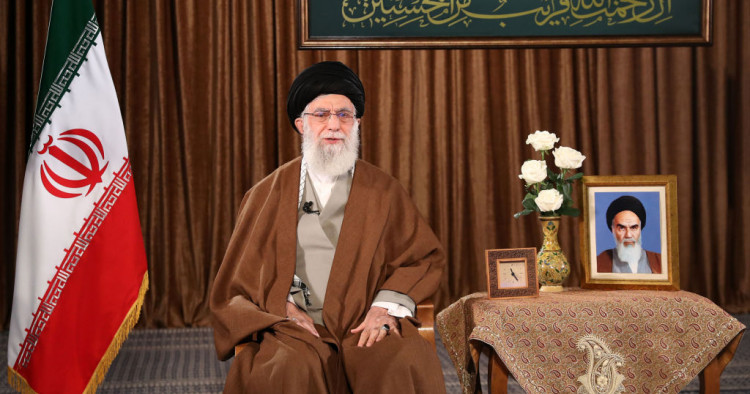 This is the first part of a three-part series.

The Islamic Republic of Iran, from the very beginning, has defined itself as a religious state, in which the clergy enjoy a privileged status. Nevertheless, the authorities have never managed to hide their constant fears over what they see as a growing gap between the ideas of many Iranian clerics and the views of Iran’s supreme leader.

Recently, one of the highest-ranking Iranian clerics made headlines by criticizing the Islamic Republic’s foreign policy. On Oct. 21, Speaker of Parliament Mohammad Bagher Qalibaf paid a visit to Grand Ayatollah Safi Golpaygani in Qom. During their meeting, the ayatollah expressed concern over the country's economic problems and suggested that "we must have relations with all countries of the world with dignity." He added, "It is not right to be sulking with many countries and it is to the detriment of the people." Safi Golpaygani is a marja, the highest title in Shiite seminaries, referring to a qualified jurist with the authority to issue a formal ruling or interpretation on religious matters.

His remarks and their clear reference to the consequences of the ongoing conflict between Iran and the United States generated strong criticism from some hardliners. Ayatollah Safi Golpaygani’s comments were particularly noteworthy given his position and stature. During the era of Ayatollah Ruhollah Khomeini, Safi Golpaygani served for eight years as the secretary of the Guardian Council, which, according to the Iranian constitution, is in charge of ratifying or rejecting parliamentary legislation as well as approving candidates in presidential and legislative elections. Since 1993, Safi Golpaygani has been one of Iran's most influential grand ayatollahs, and at the age of 102, he is the most senior marja in the country.

The sharpest reaction to the ayatollah’s remarks came from the Raja News website, affiliated with a hardline, pro-regime organization called the Steadfast Front, which forms a powerful faction in parliament and is known for its fierce opposition to any normalization between Tehran and Washington. Raja News reminded the public of Supreme Leader Ayatollah Ali Khamenei’s earlier criticism of those who sought a solution to Iran's economic problems in "foreign relations" and accused Ayatollah Safi Golpaygani of misleading the people and of "politically following secular forces." The website then blamed the ayatollah for being influenced by his entourage, likening him to the late Grand Ayatollahs Hossein Ali Montazeri and Seyyed Kazem Shariatmadari, who were both placed under house arrest after criticizing the Islamic Republic’s policies. The Raja News article was written by a seminary student close to the Supreme Leader's Office, Mehid Jamshidi, whose previous articles had been repeatedly published on Ayatollah Khamenei's website.

However, the harsh tone of this website’s criticism provoked a strong negative response. A group of students and teachers from the Qom Seminary issued a statement calling for judicial action against "insulters" of Ayatollah Safi Golpaygani (in Iranian law, insulting a grand ayatollah is a press offence). Even the head of the Special Clerical Court, Mohammad Jafar Montazeri, criticized the "desecration" of the grand ayatollah, saying that the court would "investigate" the matter.

In turn, however, Montazeri’s remarks prompted a strong reaction from the Kayhan newspaper, a hardline media outlet affiliated with the Iranian supreme leader, whose managing director is appointed by Ayatollah Khamenei himself. In a Nov. 1 editorial, Hossein Shariatmadari, the managing director of Kayhan, emphasized that any prosecution of Raja News for its criticism of Safi Golpaygani’s remarks would be "surprising and unjustifiable." He suggested that the grand ayatollah’s "inaccurate statement" had set the ground for "enemies" to take advantage of his remarks.

"Secularism in the seminaries"

No matter how the controversy plays out, critics of Safi Golpaygani's remarks have made clear references to the political discourse of Ayatollah Khamenei and his confidants in their pushback. One of these references is the accusation of "politically following secular forces," which is reminiscent of long-time concerns among the supreme leader’s associates over what they refer to as the spread of "secularism in the seminaries."

On July 23, 2018, for instance, a scholar close to Ayatollah Khamenei named Hassan Rahimpour Azghadi made headlines by delivering a controversial speech on this issue. Among a group of hardline seminary students in Qom, Azghadi made the provocative claim that "secularism is rooted in the seminaries." He also called the Qom Seminary inattentive to the "current issues of the country," and criticized its "illiteracy" in economic matters. In the aftermath of the speech, a number of clerics, including two grand ayatollahs, denounced Azghadi’s “insult" to the clergy. Some even called for his prosecution, which, of course, did not take place.

While the criticisms of Rahimpour Azghadi or Raja News might seem excessive, they point to specific concerns that have also been raised by the Iranian supreme leader himself. For example, Ayatollah Khamenei, in a meeting with a group of clerics in Qom on March 15, 2016, expressed concern about efforts aimed at "de-revolutionizing the seminaries." "If we want the Islamic government to remain both Islamic and revolutionary, the seminaries must remain revolutionary, because otherwise, the government will be in danger of deviating from the principles of the revolution," he stressed. He also described the confrontation with the United States as one of those principles and warned about questioning it in seminaries.

Ayatollah Khamenei, in another speech on Jan. 9, 2019, called the holy city of Qom "the center and mother of the revolution" and warned of the enemies’ efforts "to weaken the revolutionary and religious spirit in the city." Following these remarks, Ayatollah Khamenei’s official website conducted an interview with Ahmad Vaezi, the head of Qom Seminary’s Islamic Propaganda Office, to further elaborate on the supreme leader’s remarks. The Islamic Propaganda Office is a government institution under Khamenei’s authority charged with carrying out political and religious propaganda, especially among the clergy.

Vaezi’s comments demonstrate the political and social nature of Ayatollah Khamenei’s concerns about "secularism in the seminaries." The supreme leader’s main worry is the attitude of clerics who are not involved in "political and social issues" in support of the Islamic regime. In other words, when Ayatollah Khamenei’s supporters criticize "secularism in the seminaries," they are in fact calling for the clergy to intervene in political affairs to affirm the supreme leader's position.

In line with Khamenei’s concerns, various government institutions have published dozens of articles and various books on "secularism in the seminaries." These institutions have also held numerous seminars where speakers have elaborated on the leader's expectations for seminaries. The high level of publicity around these activities and the use of government funding for them reflects the growing sensitivity of Khamenei and his associates to the status of the Shiite seminaries.

In a recent reference to this subject, Mahmoud Mohammadi Araghi, head of Ayatollah Khamenei's office in Qom, warned about the "emergence of new secularism" in Qom Seminary. In a statement on Feb. 4, 2021, he said, "This danger is real and is recognizable in the statements of the leader of the Islamic revolution." "In fact, one of the most important strategic concerns of the leader is the situation in the city of Qom," he emphasized.

As the Iranian supreme leader, born in 1939, grows older, this is evidently becoming an ever-greater concern. It is probably not related to the issue of leadership succession in Iran, since the appointment of the next supreme leader has nothing to do with the seminaries as such, but rather is in the hands of the Assembly of Experts, which is mainly composed of Khamenei’s close associates.

Nevertheless, Iran’s seminaries are important because they are responsible for educating future generations of clerics who will play a decisive role in the policy and structure of the Islamic regime. According to the constitution and other laws of the Islamic Republic, a large number of high-ranking government officials, from key judicial and security authorities to the leader’s representatives in the armed forces and the provinces, must be Shiite clerics.

As a result, it is not surprising that the Iranian supreme leader and his supporters have "strategic" concerns about the clergy: If the seminaries do not train "revolutionary" clerics, or if key figures within the seminaries are not in line with the supreme leader’s ideas, the future of the Islamic Republic will be absolutely uncertain. (In part two of this series, we will elaborate further on the key government positions that should be held by revolutionary clerics.) In this context, the harsh reaction of Ayatollah Khamenei’s hardline supporters to opposing views, including even those of someone as respected as Ayatollah Safi Golpaygani, is perhaps more understandable.

More continuity than change in Tehran