At least they’re talking: Turkey and Greece resume negotiations, but don’t hold your breath on a breakthrough 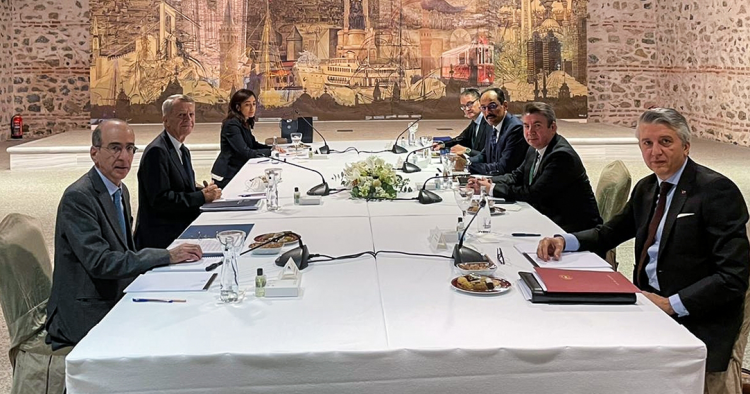 Turkish President Recep Tayyip Erdoğan is caught between a rock and a hard place. The threat of sanctions from both the European Union over a row with Greece and Cyprus about offshore energy exploration and the United States over Ankara’s purchase of the Russian S-400 missile defense system hangs over his head. So too do worries over losing ground in the polls and angering his nationalist allies at home.

In December, EU leaders agreed to impose sanctions on a number of Turkish officials and entities involved in offshore energy drilling in waters claimed by Cyprus. The EU decision upset France, Greece, and Cyprus, all of which are pushing for stronger measures against Ankara for its actions in the eastern Mediterranean. The EU countries decided that harsher sanctions such as trade tariffs and an arms embargo are on the table, but deferred that decision to March to coordinate the EU’s Turkey policy with the new U.S. administration.

Members of Joe Biden’s foreign policy team, meanwhile, are signaling that the U.S. too could impose tougher sanctions on Ankara over its acquisition of the S-400. President Biden’s choice for secretary of state, Anthony Blinken, called Turkey a “so-called strategic partner” and said the new administration would review the impact of the sanctions imposed by Donald Trump in his final days in office to see whether tougher sanctions are needed. Faced with the prospect of a coordinated and tougher Western response to his policies, Erdoğan has changed his tone. He has waged a charm offensive with the EU and reversed his belligerence vis-à-vis Biden after then-candidate Biden called him an autocrat in a 2019 interview with The New York Times. Erdoğan said he believed he could solve bilateral problems through dialogue and that he knew Biden well, noting that Biden had even visited him at his home.

A long history of tensions

Turkey’s efforts to strike a different tone were apparent on Jan. 25 in Istanbul, when Greek and Turkish officials resumed talks after a five-year gap to calm tensions in the Aegean and Mediterranean. The fact that the parties met is welcome news after the two came to the brink of war recently over offshore energy exploitation rights, but no one expected a breakthrough. The tensions between the two countries have a long history and the issues dividing Athens and Ankara are too deep to bridge.

The Cyprus question remains one of the thorniest of all. The island has been divided between the Greek Cypriot south and the Turkish north since a Greek coup d’état and subsequent Turkish military intervention in 1974. Greece and Turkey have been locked in a conflict over Cyprus ever since and efforts to resolve the issue have repeatedly failed. The recent election of hard-line Prime Minister and Erdoğan ally Ersin Tatar in Northern Cyprus makes the prospects of reunification seem even more remote, while the U.S.’s decision in September to ease the decades-old arms embargo on the island complicates things as well.

The discovery of sizeable gas reserves in the eastern Mediterranean in 2009 led to added tension between the two countries over maritime borders. The lack of an agreed definition of their respective exclusive economic zones (EEZ), maritime areas within which states claim exclusive rights to exploit natural resources like gas, is at the heart of the conflict. Greece claims that according to the U.N. Convention on the Law of the Sea (UNCLOS), it can draw its maritime borders starting from its islands. Turkey, which is not a signatory to UNCLOS, disputes the Greek argument and instead claims that every country’s EEZ starts from its mainland, not its islands. The Cyprus question further complicates the dispute over maritime boundaries. To define maximal boundaries for itself and Cyprus, Greece signed several bilateral agreements that leave a narrow strip of water to Turkey. Turkey, for its part, signed its own agreement with Libya that establishes an 18.6-nautical-mile maritime boundary and EEZs for each country north and south of the boundary, overlapping with the area Greece considers part of its continental shelf.

The two countries are at loggerheads in the Aegean Sea as well. The region has been a source of conflict for decades, bringing the NATO allies to the brink of war several times. Both Ankara and Athens claim 6 miles of territorial waters from their coasts in the Aegean Sea, but Greece defends its right to expand it to 12 nautical miles under UNCLOS. In a 1995 decision, the Turkish Parliament authorized the use of force in such a scenario. Demilitarization of a group of islands in the south Aegean Sea close to Turkey’s shores is another sore point in bilateral ties. An agreement signed after World War II confirmed the Dodecanese Islands’ demilitarized status. In September, images of Greek soldiers arriving on one of those islands surfaced, leading to Turkish warnings to the Greek side. Tensions calmed after Greece said it was a routine rotation of troops. Greece’s airspace claims are another point of contention as well; Athens says they stretch to 10 nautical miles from its coastline, while Ankara claims it should be 6 miles.

Coming to the table

Despite these long-running disputes, the Western pressure paid off and the two sides decided to resume talks. But they came to the table with different priorities. The Greek side wants the meetings to be about delimitation of contested maritime borders, while the Turkish side wants the talks to include demilitarization of the Greek isles as well as Greek airspace. As expected, no breakthrough was achieved. But both the EU and the U.S. welcomed the meeting.

Not everyone is happy though. Erdoğan’s nationalist allies worry that Ankara might make concessions to Athens on what they view as a national cause. Days before the meeting in Istanbul, Greece’s Parliament voted to extend its territorial waters in the Ionian Sea from 6 to 12 nautical miles. The move does not affect Greece’s territorial waters in the Aegean, but Erdoğan’s nationalist allies see it as a provocation. Cihat Yaycı, the architect of Turkey’s “Blue Homeland” maritime doctrine, a decade-old nationalist vision of Turkey projecting power far into the contested waters off its shores that recently became popular again, was furious. A few days before the meeting with Greece, Yaycı, a retired naval officer, warned that talks with Greece could deal a blow to Turkey’s position in the eastern Mediterranean. At the height of the Greek-Turkish tension in the summer, another Erdoğan ally took aim at Greece. Devlet Bahçeli, the leader of the far-right Nationalist Action Party (MHP), likened Greece to a “malignant tumor,” urged the government to extirpate it, and warned Greece that extending its territorial waters in the Aegean to 12 miles would be a casus belli.

Erdoğan is being pulled in opposite directions. The prospects of harsher Western sanctions are scary for the Turkish president at a time when the country is facing the worst economic slump in his two decades in power. But angering the nationalists at home is even scarier given that he continues to lose ground in the polls. The domestic balance of power makes it very difficult for Erdoğan to make concessions on the Aegean and the eastern Mediterranean, topics that are considered a national cause. And without concessions, the tensions between Ankara and Athens will only rise. After Monday’s meeting in Istanbul, the two parties said that they agreed to continue discussions. But no one is holding their breath.

Gönül Tol is the founding director of the Middle East Institute’s Turkey program and a senior fellow for the Frontier Europe Initiative. The views expressed in this piece are her own.