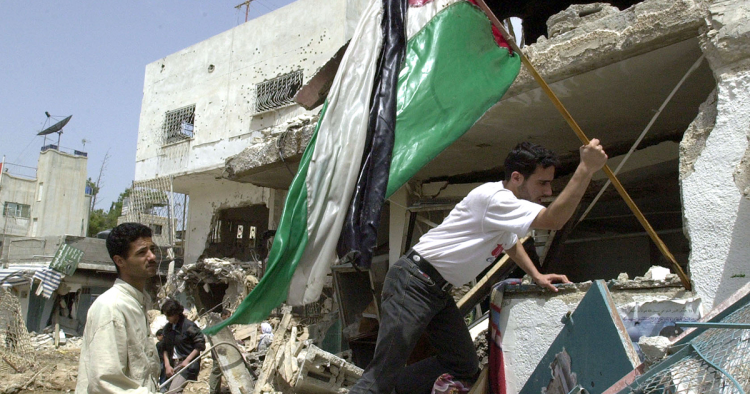 As we mark 20 years since the 9/11 terror attacks and the subsequent U.S. interventions in Afghanistan, Iraq, and other protracted elements of the ill-fated and ill-conceived “war on terror,” it is easy to overlook other disastrous legacies of U.S. policy in the post-9/11 era. This is particularly true in the case of the Israeli-Palestinian conflict, where Washington’s response to 9/11 effectively marked the beginning of the long, tortured death of the Middle East Peace Process, and with it hopes for a two-state solution.

The 9/11 attacks occurred in the midst of a violent Palestinian uprising, or Intifada, that included waves of suicide attacks on Israelis, as well as massive Israeli military reprisals that resulted in hundreds of Palestinian civilian deaths and other destruction. Seizing on America’s post-9/11 trauma and the Bush administration’s “with us or against us” rhetoric, Israel’s hardline prime minister at the time, Ariel Sharon, declared war on Palestinian leader Yasser Arafat, whom he described as Israel’s “Bin Laden,” and the Palestinian Authority’s (PA) alleged “infrastructure of terror.”

Sharon’s task was facilitated by Bush’s sidelining of Arafat, whom the administration viewed as an unrepentant terrorist, and his demand that Palestinians elect “new leaders” before any progress could be made toward peace or Palestinian statehood. Almost overnight, the Palestinian uprising against Israeli military occupation and the century-old conflict between Israelis and Palestinians were now subsumed under a broadly defined and open-ended war on terror. For the hawkish neoconservatives who now dominated the Bush administration’s foreign and security policy, including the disastrous invasions and toppling of regimes in Afghanistan and Iraq, the Palestinians were just another front in the global, even civilizational struggle, against terrorism.

Some six months after the U.S. invasion of Afghanistan, in March 2002, following a pair of deadly suicide bombings in Israel, Sharon launched his own offensive in the West Bank and Gaza. During the operation — the largest military offensive since Israel captured the territories in 1967— the Israeli army reoccupied Palestinian cities while laying siege to Arafat’s presidential compound in Ramallah. The scale of the Israeli offensive extended well beyond armed militants and terrorists to include the destruction of Gaza’s international airport, numerous government ministries, such as Health, Education, Finance, and Agriculture, the Central Bureau of Statistics, and several municipalities as well as PA police forces. Despite voicing mild opposition to the offensive, the Bush administration’s rhetorical and ideological alignment with Sharon following the 9/11 attacks gave the Israeli leader a relatively free hand in his bid to quash the Intifada while systematically destroying Palestinian governing and security institutions along the way — from which the PA would never fully recover.

Moreover, the 2005 election of a new Palestinian president, Mahmoud Abbas, and subsequent decline in violence did not lead to a revival of the diplomatic process, as U.S. officials had promised. Instead, the Bush administration abandoned its own peace plan, the internationally-backed Road Map — the last serious peace plan to be presented in the Israel/Palestine context — in favor of Israel’s plans to unilaterally disengage from Gaza while providing Sharon with “assurances” regarding the fate of Israeli settlement blocs in the West Bank, Palestinian refugees, and other issues up for negotiation. The failure of Israel’s disengagement from Gaza, resulting in the closure of its borders, undercut Abbas’ nascent leadership and helped pave the way for Hamas’ surprise election victory in January 2006.

While the election of a designated “foreign terrorist organization” to head the PA posed serious legal and political challenges for Israel, the United States, and international donors, it also presented an opportunity to encourage moderate elements within Hamas and the group’s political evolution. In keeping with the zero-sum ethos of the post-9/11 era, however, the Bush administration urged Abbas to take the extraordinary — and unconstitutional — step of dissolving the government and calling for new elections. American and Israeli refusal to consider any scenario short of Hamas’ removal from government ensured a lose/lose outcome for Abbas and his leadership, ultimately paving the way for civil war between Hamas and Fatah in June 2007 and the current division between Gaza and the West Bank.

While the Obama administration did repudiate many of Bush’s policies in Israel/Palestine, it left the most lasting and most enduring legacy of the Bush era — Palestinian division and political weakness — intact. The 14-year-old schism, meanwhile, has paralyzed Palestinian politics, fueled instability and repeated outbreaks of violence in Gaza, and undercut the legitimacy of Abbas’ leadership. Moreover, after four wars, thousands of dead, and two U.S. presidents, conditions remain stuck in a sort of “Groundhog Day” purgatory of violence and failed negotiations, even as a cash-strapped, increasingly authoritarian, and intensely unpopular PA drifts inexorably toward irrelevance.

While all of these realities are theoretically reversible, doing so would require a serious rethink of U.S. policy as well as a major investment of political capital, something the Biden administration has said it has neither the will nor a political interest to do. In the end, the peace process and the two-state solution died a slow, tortured “death by a thousand cuts.” While Bush is likely to be remembered as having done most of the “cutting,” Biden and his immediate predecessors may be most remembered for letting “the patient” bleed out.

Khaled Elgindy is a senior fellow at the Middle East Institute where he also directs MEI’s Program on Palestine and Israeli-Palestinian Affairs. The opinions expressed in this piece are his own.