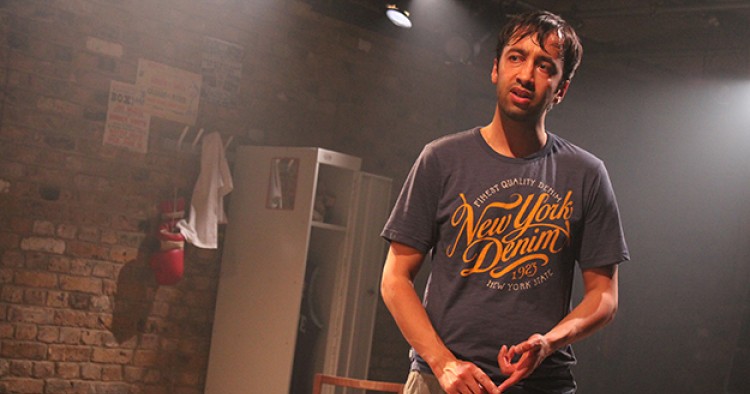 A small, darkened theater in Hackney was transformed this month into a portal for Palestine, Bradford, New York City, and a London suburb. But the quartet of monologues by Hassan Abdulrazzak—performed admirably by Asif Khan—traversed these disparate landscapes using humor as subversion, providing a unique window into otherwise humorless subjects.

Love, Bombs and Apples finds playwright Abdulrazzak at his sardonic best, with situational humor and politically astute one-liners that recall his first play, 2006’s Baghdad Wedding. Occupation, racism, the Holocaust, and ISIS are not normally topics one plays for laughs, but the London-based Iraqi playwright deftly weaves hilarity with poignancy as he explores themes normally played out in the nightly news through the lens of a quartet of frustrated young men. While the “big issues” loom large, they are upstaged by more mundane concerns that humanize the characters and situations—ranging from how to get laid to lust for the latest iPhone.

Like the characters in his 2006 Soho Theatre hit—the story of a bisexual, hard-drinking, cosmopolitan, London-based Iraqi who returns to Baghdad for a wedding only to be kidnapped by a religious extremist—the young men in Love, Bombs and Apples defy stereotypes. Here, Abdulrazzak uses humor as the best defense against both extremism and prejudice - and to great effect. The first monologue, Love in the Time of Barriers, was inspired by a true story told to Abdulrazzak by Palestinian actor/playwright Imad Farajin. Unsurprisingly, it rings the ‘truest’ of the four monologues, even as it recounts a rather outrageous mishap in the midst of Israeli occupation.

Naturally absurdist, the monologue concerns an actor in Ramallah who tries to seduce a British N.G.O. worker. They meet after his performance in an Arabic language version of Hamlet. He plays the lead role, while, as he recounts, “[t]he actor playing Claudius was chosen because he looked like the spitting image of President Mahmoud Abbas.” In the famous scene where Hamlet chastises his mother for sleeping with her brother-in law, he holds up a picture of Yasser Arafat as his “father,” while the audience hisses at the Abbas look alike. The actor’s dilemma is this: as his seduction proves successful, he must find a place to consummate his new love. Unfortunately, the overcrowded reality of occupied Palestine means he is limited to his car—impractical at best.

“She tells me more about her life: …Her dissatisfaction with her privileged friends, her guilt about being privileged herself. I nod, make sounds of sympathy, but all the time, one side of the split screen is busy computing all the possible places to get laid in Ramallah at this time of night.”

But when the English lady suggests a trip to the wall, a solution to his conundrum presents itself. His descriptions of the idealistic yet naïve do-gooder have an undeniable authenticity, down to details like her green toenail polish, stylish cropped hair, and plaintive cry as she runs her hand along the concrete barrier and asks, “why can’t human beings just get along?” The actor is delighted at the “opportunity” the wall presents and says, “thank you God, thank you Ariel Sharon, thank you Netanyahu, thank you Knesset. Thank you for giving me this moment.”

When the rather intimate moment is interrupted by the IDF, the heroic actor carries on, rising to the occasion and playing the role of a lifetime, with the wall as a set piece.

The second monologue, Level 42, is the most farcical, and most believable, performed by the South Asian British actor Asif Khan. This piece follows Sajid, a young Pakistani in London, whose father drives a cab, and his literary aspirations. With a childhood spent in Saudi Arabia and a Western obsession with the ‘war on terror,’ Sajid sees his chance to write the “definitive post-9/11 novel.” He transcends the boredom of his suburban existence by poring over details, down to the price of fertilizer for bomb-making, and writes a weighty tome about terror.

He makes dozens of copies, sends them out to all the best U.K. publishers, and waits for the phone to ring. What comes next is a shock. The police arrive and detain him on charges of inciting terror, not believing that such a turgid manuscript could be an actual novel and not a terror manual. Sajid finds himself in the absurd position of arguing the literary merits of his manuscript with a tough, but well-read, cop. In the end, he is released, thanks to the efforts of well-meaning liberal British human rights advocates. But little do they know that Sajid resents their efforts and longs for the quiet of his jail cell, where he found the necessary tranquility to re-write his novel.

The third monologue, The Apple, is the strangest of the lot but provides an intriguing look into the mind of a young man from Bradford—convincingly played by Khan, who also hails from the North England town known for its latent jihadi population. In a brilliant conflation of high-tech modernity and terrorism, Abdulrazzak’s character alternates between lust for the new iPhone and the glamor of joining ISIS.

“Because the iPhone, I swear, was meant for jihad. 'Course it was. You’ve seen the footage, right? Boys my age on top of tanks. Dressed in black. Driving around some Syrian town in tanks. Doing fancy turns with tanks. And it’s all filmed on an iPhone.”

He takes his granddad to the mosque every Friday and notes:

“Britain is a Muslim country now. They said so on Fox TV. On Fox, they said Bradford is a Muslim-only city now. No whites allowed. I swear they did. It’s madness...they must be more senile than granddad, and he comes out with some right rubbish sometimes, but nothing like that.”

He likens the mosque to the Apple store, all white and shiny and full of promise, but cautions, “[t]here is a difference though, between Islam and the iPhone. There is a small difference. The sermons are much shorter with the iPhone.”

The last monologue, Landing Strip, concerns the struggles of a young New York Jewish man caught between his conservative, AIPAC-loving father, who mentions the Holocaust whenever anyone criticizes Israel, and his liberal, pro-Palestinian Jewish girlfriend. His struggle reaches a climax when he suggests his girlfriend try waxing her private parts, just as Israel begins a brutal bombing campaign of Gaza. His unwitting conflation of the two ‘strips’ puts him in the doghouse and gets him labeled as a “Zionist pig” by his paramour.

Inspired partly by the experience of Norman Finkelstein, this is the least successful, and the most disturbing, of the monologues—partly due to Khan’s hit-or-miss portrayal of a New York Jew and partly due to the rather weighty writing. Nonetheless, it raises some important issues and is not without its comical moments.

In the end, the testosterone-fueled quartet of monologues proved a vigorous workout for the talented Khan and offered much food-for-thought for the enthusiastic audience.

But the somewhat overwhelming male-ness of its protagonists inspired a longing for a quartet of monologues for similar "every-women," which is indeed where the playwright is headed with his coming endeavor. Abdulrazzak’s next project will include monologues based on interviews with Syrian refugee women. One can only hope that he will infuse them with the same winning blend of dark Iraqi humor and London-inspired ironies that made Love, Bombs and Apples shine.