Looking ahead to COP26: How recent developments could shape this year’s meeting 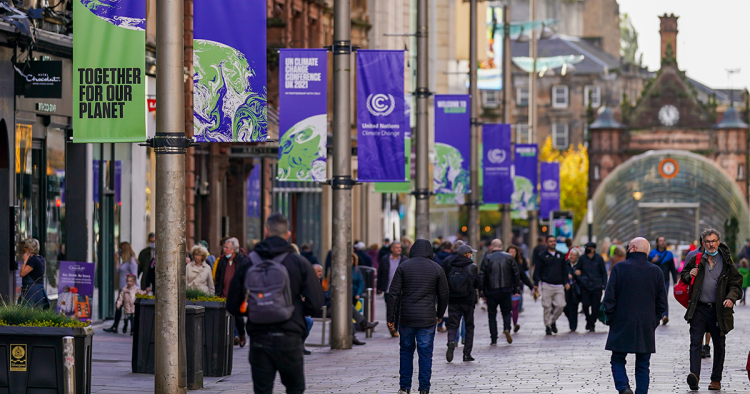 Next week, tens of thousands of world leaders, negotiators, scientists, business executives, activists, and observers from all over will gather in Glasgow, Scotland for the 26th United Nations Climate Change Conference, which will run from Oct. 31 to Nov. 12. Also known as the Conference of the Parties (COP), this distinguished body meets annually to make decisions regarding the implementation of the United Nations Framework Convention on Climate Change (UNFCCC), which aims to “prevent anthropogenic interference with the climate system.”

Although several notable international agreements have resulted from the annual COP meetings, the hallmark of the UNFCCC is the 2015 Paris Agreement. A historic achievement in multilateral diplomacy, this legally binding treaty on climate was established at COP21 in Paris. The expressed goal of this agreement is to “enhance the implementation of the Convention” by holding the increase in global average temperature “well below 2°C above pre-industrial level” and pursuing efforts to further limit this increase to 1.5°C. The agreement hopes to achieve this goal by instituting “bottom-up” approaches of allowing each country to determine their own emission goals (called Nationally Determined Contributions, or NDCs), as well as “top-down” requirements to strengthen these actions over time and to participate in the necessary reporting and review processes.

This year, the U.K. has assumed the rotating COP presidency with a clear set of goals. The first of these is to mitigate climate change by achieving net-zero emissions targets by 2050, a necessary goal to prevent a catastrophic rise in average global temperatures. The U.K. government also hopes that the COP will serve to enhance adaptation efforts to cope with the already unavoidable consequences of our changing climate. To achieve these goals, the U.K. has established a third goal to mobilize the financial capital necessary to enable mitigation and adaptation efforts in developing countries. Finally, the U.K. has articulated a more general goal of enhancing collaboration between the parties to accelerate action and finalize outstanding components of the Paris Agreement’s governing rulebook.

In light of recent events, including the postponement of last year’s conference due to COVID-19, this COP represents a unique opportunity to capitalize on a heightened sense of urgency to accelerate action toward the goals of UNFCCC, including the 2015 Paris Agreement. There are several developments (both old and new) that will influence the discussions and negotiations leading toward realizing the goals of this COP meeting:

While the Paris Agreement has already been ratified by 192 of the 197 parties to the UNFCCC, an important piece remains unfinished: the Article 6 rulebook. Article 6 aims to generate “higher ambition in mitigation and adaptation actions” by establishing three mechanisms for voluntary cooperation toward climate goals, including two market-based solutions establishing international carbon markets and a third option for non-market approaches. This article was the last to be agreed upon at COP21, and subsequent COPs have yet to finalize the rules for how these mechanisms will be implemented.

Sticking points in Article 6 negotiations have included concerns over double-counting (i.e, if one country sells their emission credits to another, they cannot both count those reductions toward their NDCs) and the transfer of past projects, methods, and credits established under the Kyoto Protocol. An acceptable rulebook must also include provisions to ensure the additionality of new initiatives that mitigate global emissions. Furthermore, while a well-designed rulebook could contribute to the accomplishment of the Paris Agreement’s goals at a reduced cost, a hastily designed one with too much flexibility could serve to undermine the collective action goals of the agreement. One of the U.K.’s foremost goals for COP26 is to finalize an acceptable Article 6 rulebook, and many are hopeful that the international community’s renewed sense of urgency will allow COP26 to succeed where the past four COPs have failed.

The Intergovernmental Panel on Climate Change (IPCC) is a body of experts from around the globe that is responsible for “advancing human knowledge of climate change.” While actual policy choices are the prerogative of the UNFCCC, the IPCC represents the epistemic authority on evolving climate knowledge. This data is subsequently presented as “what-if” projections in assessment reports that are published every six to seven years. The most recent IPCC report, AR6 Climate Change 2021: The Physical Science Basis, published in August 2021, provided a stark reminder of the severity of the climate crisis. Among other things, this report established that it is “unequivocal” that global warming is human-induced and that warming will exceed the 1.5° goal in the 21st century unless deep reductions in emissions occur in the coming decades. Many are hopeful that this new data, in addition to a lost year of negotiations due to the COVID-19 pandemic, will generate a renewed sense of urgency and willingness to compromise among negotiators at this year’s COP.

The IPCC’s acknowledgment that global temperatures will continue to rise and that many changes will be irreversible for centuries has forced adaptation into the spotlight. A primary goal of the U.K.’s presidency is to enhance adaptation efforts to “protect communities and natural habitats.” A significant component of this goal is the successful mobilization of climate finance, specifically the $100 billion per year that developed countries committed to mobilizing by 2020 at COP15 in Copenhagen. Although there are some discrepancies in reporting, it appears that these nations have collectively failed to achieve this crucial goal that will aid the world’s most vulnerable communities in adapting to our changing climate. Emerging research suggests that many developed countries are not contributing their fair share of funds toward this goal, meaning that the generation of more equitable finance will be a key concern for many developing nations, including several in the Middle East and North Africa, at this COP.

It is also likely that the recently developed Adaptation Action Coalition will have a notable presence at COP26. This coalition was formed in January 2021 by the U.K., Egypt, Bangladesh, Malawi, the Netherlands, Saint Lucia, and the United Nations Development Programme to “accelerate global action on adaptation to achieve a climate resilient world by 2030.” The coalition has invited all countries to join the 38 current members to deliver multi-sector adaptation efforts in line with the Adaptation Action Agenda.

3. Ratification of the Paris Agreement

Turkey ratified the Paris Agreement on Oct. 6, just weeks before commencement of the COP26 meeting. This is noteworthy not just because it happened, but because of how it could influence reaching the global goal of net-zero carbon by 2050. Turkey’s ratification comes with a caveat, one that has also been the primary reason for its long delay to ratify the agreement after signing it in 2016. Turkey asserts that with respect to the Paris Agreement, it should be categorized as a developing country, despite its current designation as an Annex I party to the UNFCCC. Annex I parties are generally described as industrialized and developed countries. Turkey’s decision to ratify the agreement by unilaterally asserting developing country status is a means to access more climate finance, which is typically reserved for developing countries through mechanisms like the Green Climate Fund. It remains unclear if this tactic will bear fruit at the COP26 meeting as Turkey seeks to change its designation with President Recep Tayyip Erdoğan’s planned attendance in Glasgow. Moreover, if this move is successful, will it motivate other developed nations to attempt to do the same?

With Turkey’s ratification, only five countries remain that have not yet ratified the Paris Agreement: Iran, Iraq, Eritrea, Libya, and Yemen. With the added sense of urgency for climate change mitigation at this year’s COP meeting (as driven by the ominous outlook of future climate change from the IPCC report), the spotlight shines brighter on these final holdouts. This is especially true of Iran, which generates the largest amount of annual carbon emissions in the Middle East (and eighth largest in the world). Iran is expected to have a delegation present at the COP meeting and with talks this year heavily focused on how to drastically cut global greenhouse gas emissions to achieve carbon neutrality by mid-century, Iran’s stance in those discussions will be widely and closely observed.

Several Gulf Cooperation Council member states have announced plans and measures regarding how they will address carbon emission reductions ahead of the COP26 meeting. The UAE and Bahrain announced that they would achieve net-zero carbon by 2050 and 2060 respectively. Absent any nuanced plans on how they would achieve these goals, Qatar has criticized these lofty proclamations as essentially being akin to putting the cart before the horse. Saudi Arabia has also committed to achieve net-zero carbon emissions by 2060 through the Saudi Green Initiative and spearheaded by its Carbon Circular Economy philosophy. The Carbon Circular Economy emphasizes the capture, reuse, and recycling of carbon into other useful products and is supplemented by carbon emission reduction and removal by incorporating more renewables into the country’s energy portfolio and introducing more carbon sinks via reforestation. However, these climate action goals are juxtaposed with the fact that Saudi Arabia’s net-zero carbon objective does not account for oil and gas that is produced in the kingdom but exported to and used by other countries (with plans to increase oil production moving forward). This approach will likely be a point of contention with other nations seeking to directly and aggressively cut back on carbon emissions in the next decade.

Abbey Krulik is a research assistant for MEI’s Climate and Water Program.

Mohammed Mahmoud is the director of the Climate and Water Program and a senior fellow at MEI.