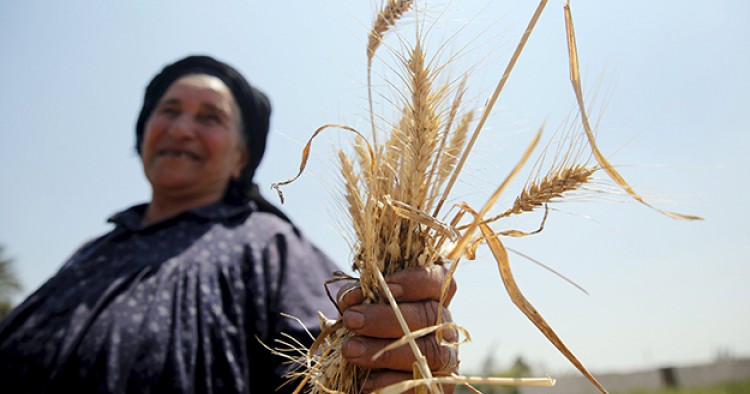 The impacts of climate change on Egypt’s agriculture are likely to be substantial, and will affect the millions of Egyptian women reliant on this economic activity for their livelihoods. The agricultural sector employs a large percentage of Egypt’s working women, a sector known for its low and unstable earnings. Millions of rural Egyptian women working in agriculture already suffer from poverty, and climate change will make matters worse. To defuse this looming danger, Egypt’s gender and sustainable development agenda, and its climate change adaptation programs, must explicitly incorporate components designed to meet the capacity building needs of these women, and strengthen the livelihood options of rural females.

Much of the problem stems from the current status of women in Egyptian society. Egyptologists are in agreement that women’s status in Ancient Egypt was better than not only that of their foreign contemporaries, but also of the experiences of many women today. In modern history, it was in Egypt that the education of Arab girls began (1880s). The situation is different today: one third of Egypt’s adult females are illiterate—while 85 percent of adult males are literate. This adds up to ten million Egyptian girls and women 15 years of age or older who cannot read or write.

The lack of this most basic foundation for prosperity and independence still compromises the economic prospects of too many women in Egypt. Although the picture is not so bleak if we zoom in on the youth group (14-25 years), in which 90 percent of females and males alike are literate, this does not mean that all is well.  A good early start in education does not guarantee continued adequate learning in subsequent years; cultural norms can, and in Egypt do, present barriers to further significant advancement in learning among females. And the results of what today may seem like a positive trajectory for continued human capital development will not, even under the best circumstances, begin to translate into economic empowerment for years to come.

In the meantime, a majority of adult Egyptian women still have not managed to earn even a high school education. Egyptian women are therefore a minority in the professional workforce. The livelihoods of working females are heavily concentrated outside the more dynamic, stable economic sectors: over 40 percent work in agriculture, where various negative effects of climate change are expected to converge.

The female workforce’s large concentration in agriculture is ironic because women are a small minority in terms of agricultural land ownership. According to the Food and Agriculture Organization, they make up only five percent of agricultural land owners while men comprise 95 percent. Women are often denied access to inheritance in Egypt, most particularly if it is land or other property. This practice is debilitating because financial asset ownership is essential for women to exercise agency and make decisions about their lives, pursue educational opportunities, finance entrepreneurial work, or simply have some financial security. The Egyptian parliament seems to be trying, but meekly and possibly only superficially, to fight this destructive cultural practice that, at the heart of it, is financial corruption.

This overall state of Egyptian women in agriculture is of concern for another important reason. Food prices will remain high and could rise even further in the foreseeable future in Egypt. Double-digit inflation rates now over 30 percent—more than double what they were in October 2016—are at their peak in three decades. Continued heavy dependency on food importation plus a weak Egyptian pound will allow high inflation to persist. Rural women in agriculture who are usually seasonal workers with unstable earnings are vulnerable to food insecurity, which undermines all areas of life.

Tiny landholdings, seasonal production processes and work, and unstable earnings characterize most of Egypt’s agriculture, and thus leave millions of women who rely on this sector for their livelihoods impoverished. While no accurate figures exist, we can safely estimate that about 27 million females live in rural areas, based on the national proportion of females to males, and on the percentage of the rural population in the country. From the rural poverty rate—32 percent—we can estimate that about 8 million rural women (many of whom working at an age younger than 15) are poor—including those who work in agriculture. The average daily wage for a seasonal farm worker in Egypt is in the range of $5 - $8; it is usually lower for women compared to men.[i]

Climate change presents considerable risks to the already fragile socioeconomic situation of so many rural Egyptian women. Egypt’s agriculture is particularly vulnerable to increased heat waves, decreased rainfall, more intense dry and wet weather events, and subsidence of prime agricultural land in the Nile Delta from sea level rise. Rural women, with high illiteracy, little to no asset ownership, and a weak capacity for economic mobility and adaption, will suffer the most from these effects.

What does this mean for Egypt’s sustainable development and climate change policies? Seriousness about building capacities resilient to climate change and about crucial broad-based development requires prioritizing improvements not only in agriculture generally, but also in the lives of rural women in particular. Deliberate attention, on a large scale, to the adaptation and capacity building needs of rural agricultural female workers is still absent from the gender and development policy agenda in Egypt. However, gender equity is a necessary condition, not a luxury Egypt can opt to do without, for any development framework to be sustainable. There is no way around this if the goal is to significantly reduce poverty as climate change impacts continue to unfold.

[i] Information obtained from employer farmers in Egypt, June and October 2017.

Responding to Natural Disasters in the MENA Region and Asia: Rising to the Challenge?

India and the Middle East: Common Areas of Action on the Sendai Framework