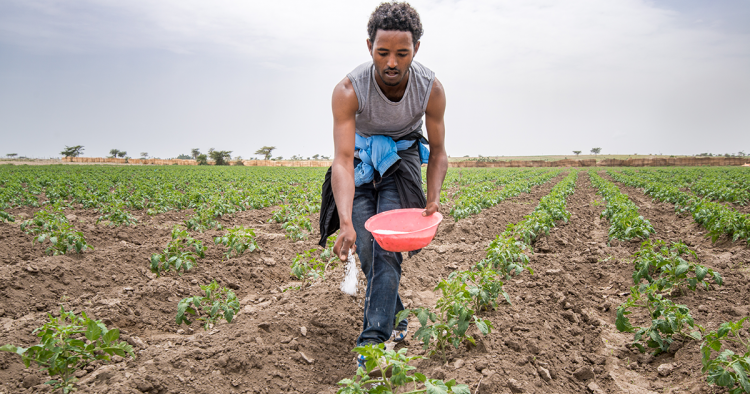 After 100 days of war in Ukraine on Europe’s eastern flank, a critical new front has opened on Europe’s southern flank with the food crisis in Africa. European Commission President Ursula von der Leyen has accused Moscow of weaponizing famine and using it against Africa. Already on a near-war footing to counter Moscow’s westward advances in Ukraine, Europe is now pressed to prevent a famine-driven mass migration crisis coming to its southern shores from North Africa. As Europe faces a two-front, geo-economic war of attrition with Russia, Morocco’s plan to increase its fertilizer output by nearly 70% changes the strategic equation by countering Moscow’s ability to weaponize the food-energy nexus. In so doing, Morocco has demonstrated its increasing importance as a geopolitical partner for Europe and the United States in Sub-Saharan Africa.

When Russian President Vladimir Putin invaded Ukraine on Feb. 24, 2022, he also detonated the financial equivalent of a megaton bomb within the global economic system in the form of inflation. Commodity shortages resulting from the war’s disruption of supply chains have sent consumer prices soaring worldwide. The most immediate impact has been felt in food production chains, especially in Africa’s food-insecure states on Europe’s southern borders. Already overstretched supporting a beleaguered Ukraine, the European Union’s immediate concern is that hunger-driven migration from Africa could be more than the EU can handle. Amid concerns that large numbers of migrants could attempt the perilous boat crossing from North Africa, European Commission Vice President Margaritis Schinas warned that hunger-driven migration from Africa was “not going to be so manageable,” adding, “We have a global interest in avoiding this.”

To be clear, Russia is not responsible for the global food crisis. As a prior MEI publication warned at the time, the food crisis had been metastasizing throughout 2021. In early June 2021, food inflation had already reached the same level as the immediate build-up to the 2011 Arab Spring uprisings that rocked North Africa. Back then, soaring food prices kept people on the streets with chants of “bread, freedom, and social justice” until long-standing regimes in Tunisia, Egypt, and Libya fell in quick succession. During the latter six months of 2021, food inflation continued to rise well above those Arab Spring levels. In Q3 2021, the price of soft wheat used in bread manufacture stood at $271 per ton, a 22% increase over the previous year. The price in the fourth quarter of 2021 shot up even further, and as of March 3, 2022, just one week into Russia’s Ukraine invasion, it stood at nearly $389 per ton. Moscow has simply pushed on the vulnerable points in an already fragile global food system and that system started collapsing from its own weaknesses.

In Africa, the state of food security was already stark: It has the highest proportion of its population, 21%, experiencing severe hunger of any region in the world. The U.N. Food and Agriculture Organization’s 2021 report on the State of Food Security and Nutrition in the World warned that there were an estimated 282 million undernourished people in Africa, equivalent to 85% of the United States’ total population. While Russia may have poured gasoline on the flames of the food crisis, it did not start the fire.

Morocco countering the weaponization of the food-energy nexus

The resilience of food systems begins under the soil with fertilizer, the foundation of the food-energy nexus. Modern fertilizer created the enormous increases in crop yields that have driven the world's population boom over the past 100 years, climbing from about 1.8 billion to the current 7.9 billion people. As Russia is the world’s largest fertilizer exporter, fertilizer represents one of the greatest vulnerabilities for both Europe and Africa. The EU27 itself depends on the Russian Federation for 30% of its fertilizer supply.

Russia’s advantageous position is amplified by its status as the world’s second-largest natural gas producer, since gas is a main component of nitrogen-based fertilizers. Nitrogen, a macronutrient required by plants to grow, is delivered by fertilizers as the nitrogen-hydrogen compounds ammonia and urea. The hydrogen comes from natural gas, whose price accounts for 80% of fertilizer’s variable cost. Even before the war in Ukraine, natural gas prices had been rising sharply. As of October 2021, Europe’s natural gas prices had increased by 400% since January of that year. The price spike saw the cost of ammonia rise to $1,000 per ton in November 2021 compared to $110 earlier in the year. Accordingly, the price of the most common fertilizers rose to their highest level in 10 years.

The Russia-Ukraine war jacked prices even higher, turning fertilizer into an existential crisis for global food security. The world’s two largest fertilizer exporters, Russia and China, accounting for a combined 28.4% of global exports, had already imposed export restrictions on fertilizer. Two weeks into Russia’s Ukraine invasion, Europe’s global fertilizer giant, Yara, cut ammonia production in its Italian and French plants by more than half because of soaring natural gas prices while other producers in Europe shut down entirely.

While the fertilizer supply crunch will register as soaring food prices on European supermarket shelves in autumn 2022, the supply shortage could spell catastrophe for Africa. In 2006, Africa’s fertilizer use averaged only 8 kg per hectare, 10% of the world’s average, prompting the African Union to adopt the goal of raising average fertilizer use to 50 kg per hectare. Optimistic estimates peg Africa’s recent average fertilizer use at only 19 kg per hectare. Due to the lack of affordable or even available supplies, African farmers have been reducing their use of fertilizer in this year’s planting to little or none. Moving forward, the resulting poor local crop harvests and rising global food prices could push millions of Africans into famine and to famine-driven migration.

Morocco is the world’s fourth-largest fertilizer exporter, following Russia, China, and Canada. On May 17, 2022, Morocco’s fertilizer giant ﻿Office Chérifien des Phosphates (OCP) announced that it would increase its 2022 fertilizer production by 10%, putting an additional 1.2 million tons on the global market by the end of the year. The figure reflects OCP’s ability to create a 1-million-ton-capacity production line in six months. OCP’s financial director stated that the company plans to increase its production capacity between 2023 and 2026 by an additional 7 million tons, or 58% over present production levels. A shrewd business decision by OCP to increase its global market share, the company’s increased output levels would counter Russia’s ability weaponize fertilizer and food shortages. Stepping into a role approximately analogous to Saudi Arabia in the global oil market, Morocco could become the central banker of the global fertilizer market and a gatekeeper of the world’s food supply.

Morocco’s role in countering the weaponization of the food crisis points to the kingdom’s increasingly strategic role in Sub-Saharan Africa’s food security. As noted in an MEI study on Morocco’s agricultural outreach to Africa, OCP has opened subsidiaries in 12 African countries since 2016, building local blending facilities to calibrate fertilizers specifically to the soil of each African country and empowering smallholder farmers to better and more profitably participate in agricultural value chains. As a result, Senegal’s millet yield jumped 63% and Nigeria’s corn yield 48%, with similar results in Ghana and elsewhere. OCP’s involvement in Ethiopia has seen wheat, corn, and teff yields increase by up to 37%.

OCP is building fertilizer plants in Sub-Saharan Africa as joint ventures with local stakeholders. In Nigeria, which sits on the continent’s largest natural gas reserves, OCP and its Nigerian partners are constructing a $1.4 billion ammonia and fertilizer plant with the aim of tripling the amount of fertilizer used by Nigerian farmers within five years. OCP is investing $1.3 billion to construct an industrial fertilizer complex in Ghana, utilizing Ghanaian natural gas and servicing West African markets. For East African markets, OCP is building Africa's second-largest fertilizer production complex in Ethiopia, as a joint venture and utilizing local gas resources. OCP expects the $2.4 billion first development phase will supply the Ethiopian fertilizer market in 2023.

Investing a total of $6.3 billion to construct fertilizer plants in sub-Saharan Africa, Morocco has shown remarkable strategic foresight. In helping to counter the Russian threat of weaponizing the food-energy nexus, Rabat is demonstrating its increasing importance for Europe and the United State as geopolitical partner in Sub-Saharan Africa. With the geo-economics of connectivity and near-shoring bringing Africa’s geopolitical significance into sharper focus, Europe and the United States’ strategic engagement with Morocco will likely intensify.

Professor Michaël Tanchum is a non-resident fellow with the Economics and Energy Program of the Middle East Institute (MEI). He teaches at Universidad de Navarra and is an associate senior policy fellow in the Africa program at the European Council on Foreign Relations (ECFR). He is also a senior fellow at the Austrian Institute for European and Security Policy (AIES).

MEI is an independent, non-partisan, non-for-profit, educational organization. It does not engage in advocacy and its scholars’ opinions are their own. MEI welcomes financial donations, but retains sole editorial control over its work and its publications reflect only the authors’ views. For a listing of MEI donors, please click here.