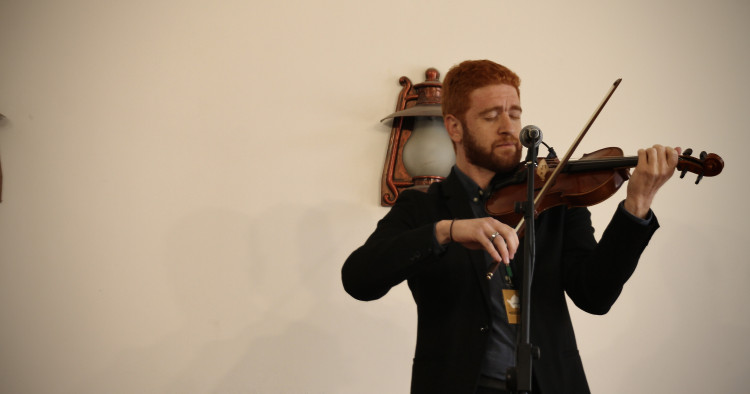 In a room at the old Mosul Museum, a young Moslawi singer closes his eyes in a moment of rapture. Singing next to the museum’s modernist 1974 incarnation still being restored after ISIS’s pillage of its treasures, his voice lifts the hearts of listeners.

32-year-old Walid Said’s plaintive cries, carried on a melody by the Sufi icon Mullah Othman al-Mawsili, seem to embody both the pain and the pride of a city rising from the ashes. While ISIS may have destroyed al-Mawsili’s statue, the renowned poet and maqam composer’s songs still ring forth from admirers like Walid.

“Tela’at ya mahla noorha” (“[The sun] has risen with its beautiful light”), he intones, as the audience sways and sings along in unison. Such lyrics celebrating a new dawn fit the occasion of the concert, the museum’s first since the siege of ISIS in 2014, which brought with it a prohibition on music.

Amid unrepaired infrastructure, mounds of rubble, and high unemployment, there is still a sense that the soul of the city is slowly being revived. The concert, part of a traditional music festival organized by the NGO Action for Hope in conjunction with UNESCO’s Revive the Spirit of Mosul (RSM) program and the European Union, is a formal, invitation-only affair with officials from the UN and the EU sitting front and center. Although the festival’s program promised iconic outdoor venues like the al-Tahera Church — currently being restored by UNESCO and visited by Pope Francis last year — performances are largely confined to the heavily guarded indoor museum space. But the enthusiastic audience of mostly male Iraqi attendees clapping and humming along captures this newly reenchanted Mosul more succinctly than NGO-speak ever could. Once known not as a war zone but as a cultural crossroads on the Silk Road, the city is experiencing a kind of artistic reawakening.

In the spirit of the Silk Road, today’s concert in Mosul — a city of bridges whose name means “junction” in Arabic — features performances by international groups, including a trio of lovely Frenchwomen regaling the audience with world music, a group playing southern Italian tunes, and a Hispano-Arabic ensemble.

The concert also features genuinely moving voice and violin maqam solos by Layth Sidiq, a Mosul native who left as a baby and is now returning for the first time. Before performing a violin solo by Adam Haddad, an important Iraqi composer from the mid-century Fine Arts Quartet, Sidiq exalts the power of music to save the city of his birth.

“I’m so grateful to be back in Iraq for the first time and to receive such a warm welcome from the audience — especially after what has happened to the city and to the country as a whole — and to know that as artists we have the chance to rebuild through music. We are social activists who can create positive change.”

Outside of the rarified realm of internationally funded music festivals, it would appear that Moslawis are simply getting on with it. After centuries of harmonious co-existence between Muslims, Christians, Arabs, Kurds, Turkmen, Shabaks, Yazidis, Armenians, Sabeans, and Mandaeans, as well as a history of foreign invasions and interventions, they don’t need instruction in how to get along, however well-intentioned or funded.

The revival of the city’s central bazaar began when a single merchant rebuilt his stall. His endeavor evolved into a kind of local competition that led to the restoration of Mosul’s commercial and social heart with assistance from local notables such as the Jalili family, who have also helped to restore prominent city mosques, just as their ancestors — rulers of the city from 1726 to 1934 — had done in centuries prior. The Mosul library — burned and razed by ISIS — recently reopened, as did the city’s only theater at the University of Mosul, with a triumphant evening of orchestral music.

And happily, a wooded area by the river overlooking the old city known as the “jungle” has sprung back to life, with cafes and restaurants and new “wedding halls” abuzz with celebrations on weekends. A 1980s Saddam-era behemoth called the “Tourist Village” has reopened, charging upwards of $80 a night for accommodation. Foreign tourists have started to trickle back in, spurred by both improved security and a new visa available on arrival to dozens of nationalities.

While homegrown initiatives have proved successful, it’s impossible to deny the impact of UNESCO’s RSM project launched in 2018 by Audrey Auzoulay. The project has made a splash with a $50.4 million U.S.-UAE-funded reconstruction of the al-Nouri Mosque and the nearby al-Tahera and Our Lady of the Hour churches, and a $22.9 million EU-funded restoration of old-city houses, an elementary school, and the al-Aghawat Mosque. RSM’s mission statement melds social and architectural restoration, boldly stating: “Reviving Mosul is not only about reconstructing heritage sites, it is about empowering the population as agents of change involved in the process of rebuilding their city through culture and education.”

A crucial part of UNESCO’s effort hinges on getting local residents involved in rebuilding their neighborhoods through the direct employment of architects and engineers as well as training programs in construction and specialized restoration techniques.

For 25-year-old Noor Ammar and 26-year-old Aveen Imad, UNESCO’s RSM project is something they can really get their hands on. Ammar and Imad have been part of technical vocational educational training (TVET) in traditional stone masonry associated with an EU-funded, UNESCO-operated program to restore old Ottoman-era houses damaged during the liberation of Mosul. The program is starting to bear fruit with 44 houses completed in March and another 75 set to be finished by the end of the year.

The pair are among 119 women and 670 men who are learning to employ traditional building techniques using “Mosul marble” — a kind of gypsum alabaster native to the area — and form part of a larger effort to encourage heritage conservation. Another UNESCO program in Mosul seeks to train young architects and civil engineers in heritage restoration.

This month, Ammar and Imad have been learning the delicate art of coloring and repairing damaged alabaster. After four months of training, they began working on old-city sites in February.

“This is not a usual profession for a woman,” says Ammar, who has a degree in history from the University of Mosul. Imad, a Christian woman from Bartella with a degree in business administration, concurs.

“But after sitting at home for so many years during the occupation by ISIS,” she explains, “we’re really glad to be working on such an important project that helps restore what was destroyed.”

And as UNESCO continues with their restoration efforts, there is now a bigger job market, say the pair, for those trained in heritage conservation techniques than for university graduates.

“It’s a sought-after skill,” says Imad, “and one that will guarantee future employment.”

“There’s so much work now with NGOs and the Iraqi government in heritage conservation, now that the rebuilding has begun in earnest,” notes Ammar.

Mosul’s old city, where Jews, Christians, and Muslims once lived side by side, was severely damaged by aerial bombardment from the Iraqi army and its allies as they sought to flush out ISIS.

Today UNESCO’s TVET and other training programs are not only helping the rebuilding effort but also reviving dying art forms and traditional crafts.

“Before I started this training,” says Imad “I never knew this kind of artisanal work still existed. It was just stories I heard from my grandfather.”

Imad hopes that their efforts will also contribute to the growth of cultural tourism in the old city, especially as UNESCO continues to restore the al-Nouri Mosque, the al-Tahera and al-Saa churches, and many historic houses along two important “heritage trails.”

As the old-city houses come back to life, their spacious courtyards and cool alabaster basements have also attracted NGOs that work in Mosul, many of which are already renting houses from Moslawi families. Markets have reopened and the al-Ekhlass School, a burnt-out shell only two years ago, is being reconstructed as a child-centered learning facility.  A cluster of restored heritage sites has popped up across the street from the mosque, including Beytna, an old Moslawi house turned cultural center that hosts regular lectures and concerts.

“I have a degree in history,” says Ammar, “but this is like working with living history. I’m proud to be part of rebuilding my city.”

Still there is much work to be done in terms of repair to both tangible and intangible heritage in Mosul. While some 100 Christians have returned, many come only to attend Sunday services at some of the newly reopened churches — like the al-Beshara Syriac Catholic Church, rebuilt from its ruins by its engineer priest with shipping containers once used as housing for displaced parishioners in Erbil.

When asked why so few Christians — who numbered 10,000 before 2014 — are returning to Mosul, the site architect for the EU-funded old-city UNESCO projects, Abdalla Jamal, says, “They lost hope in the city after they were forced to leave their houses.” Rebuilding the old-city houses, he relates, is not just about providing shelter or carrying out restoration: “Our main goal is to restore hope for all the people who lost it.”

“People lost their houses and loved ones,” says the 32-year-old architect, a Muslim Moslawi who survived the siege of ISIS, “especially Christians who had to leave for three years during the occupation by Daesh. We want them to return to their homes, but also to their friends and neighbors.”

The old city of Mosul, he explains, “had a special network of social connections. Neighbors were connected to each other just as the houses share walls.”

The intangible and tangible heritage of Mosul’s old city met during the Mosul music festival in a novel way, with two evening “jam sessions” taking place in one of the UNESCO-restored houses.

It may well take another decade before Mosul returns to its former glory, and for infrastructure and economic growth to be restored. But social cohesion and the “intangible” heritage that makes a culture are much more fragile entities.

Still, as Layth Sidiq croons maqams beneath a chandelier in the old Mosul Museum, he evokes the beauty of a city that persists in spite of its ruin. As Moslawis sing along with the serpentine melodies, the room is filled with the promise of rebirth, however ephemeral.