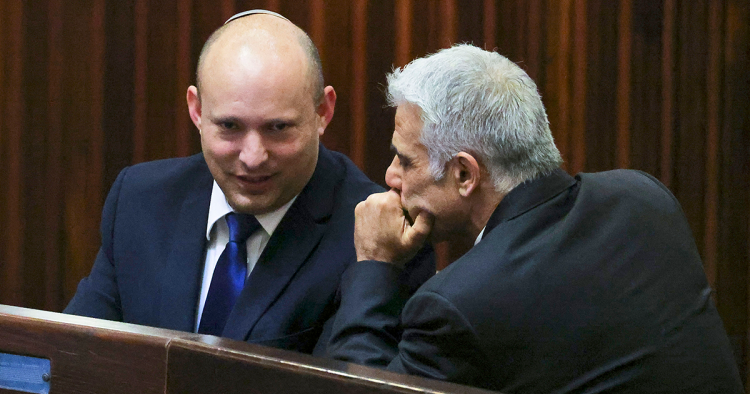 There is only one thread holding together the unprecedentedly disparate parties that will establish and support the nascent Israeli government announced on the night of June 2, an hour before the midnight deadline. That thread is, of course, a shared loathing for Benjamin (“Bibi”) Netanyahu, who has served an unprece­dented 15 years, including the last 12 consecutively, as Israel’s prime minister. Whether that thread will even get the new government past its first hurdle, which is a vote of confidence in the Knesset, much less to its theoretical four years, is an open question. Until recently no one could have imagined such a political monstrosity might be conceived, let alone gestated, but there’s a decent chance this government will get off the ground.

Politically the new government stretches from the moderately left, social-democratic Meretz party (6 Knesset seats) all the way to the hard-right, nationalist, pro-annexationist Yamina (now 6). Along the way, it passes through the somewhat less left Labor (6) and then reaches its pivot, the Yesh Atid party (17) of Yair Lapid, who actually received the mandate to try to form a government four weeks and one war ago, after Netanyahu failed to do so.

Then the thread runs through the Blue and White Party (8), led by last year’s anti-Bibi hope, Benny Gantz, who formed a government with Netanyahu a year ago — and rues the day. Moving rightwards we come to New Hope (6), composed of former Likud members who support its policies but reject its current leader. Then there is Yisrael Beiteinu (7), led by Avigdor Lieberman, a right-wing stalwart whose astonishing refusal to continue his partnership with Netanyahu kicked off this cycle, four elections and two years ago. The rightmost posi­tion is held by Yamina (“Rightwards”), led by Naftali Bennett, who has played Hamlet in this drama, and stands to be handsomely rewarded for his well-publicized indecision.

The surprise coalition member, whose inclusion was necessary to reach the needed 61 seats, is the United Arab List (4), known as Ra’am from its Hebrew acronym, led by Mansour Abbas. It stands to become the first predominantly Arab party to be part of a governing coalition, though Arabs have sat in each Knesset since Israel’s founding. Ra’am is a conservative party and is often called “Islamist,” although within the peculiar conven­tions of Israeli politics, “Arab” parties are automatically classified as part of the “left.” Abbas explicitly rejected this typology when he split from the predominantly Arab “Joint List” (6) before the last election, declaring that his party had more in common with the Jewish ultra-Orthodox, Bibi-supporting Shas Party (9) than with his Arab brethren in the Joint List. The Joint List may (or may not) play a supporting role by supplying an extra couple of votes if necessary, as several Yamina MKs are a bit wobbly when it comes to actually forming a government with some of its new coalition-mates; one has already defected.

While this precedent-shattering development may seem to pale compared to the rest of this political melodrama, it could well have the greatest long-term effect on Israeli society, especially given the street fighting between Jewish and Arab Israelis just a few weeks ago. The contrast between that unprecedented violence and this unprecedented political cooperation is stark.

There is not nearly enough space here to rehearse the litany of complaints that every one of the new coalition members has with Netanyahu — and they are not all the same, though most in the coalition feel they have been betrayed and deceived repeatedly by the current prime minister. Many on the right were personally mentored in politics by Bibi, but then fell out with him and/or his wife, Sara. The left compares him with Donald Trump or Hungary’s Viktor Orban in his persistent whittling down of the state’s democratic institutions. Then there is the criminal trial currently going on, with Bibi defending himself against charges of bribery, fraud, and breach of trust. Most feel that his desperate attempts to hold on to power stem principally from the now-distant hope that a Knesset led by Likud (still the largest party by far, with 30 seats) would pass a bill effectively delaying or even ending his prosecution.

Not the least strange aspect of the coalition agreement is the fact that Bennett, with 6 seats, will take the first two years as prime minister before turning the office over to Yair Lapid, the centrist, with 17. The name of the game is “leverage” and the top job was the essential carrot that lured Bennett away from forming a coalition with Bibi, despite persistent backstabbing — that and the fact that such a coalition might not have been arithmetically possible.

But can they get anything done?

A rough American analogy might be a government containing both Bernie Sanders and Liz Cheney, united only by their shared revulsion for Donald Trump. It’s hard to imagine. But what, if anything, can a government composed of such political polar opposites actually accomplish?

In my view, possibly quite a lot, if it survives. Unlike in the U.S., in Israel the whole country doesn’t seem to be polarized around every political issue — there’s little “vaccine hesitancy” for example and few conspiracy theories. The new government’s guidelines explicitly forbid it from dealing with the perennial third rails of Israeli politics, namely future relations with the Palestinians as well as the issue of “synagogue and state,” that is, how religious and secular Jews get along with each other. With these off the table — and the status quo maintained if possible — the govern­ment will have to deal with important but less existential issues such as, among others:

In addition, Ra’am will get some support for its agenda of more land and housing for Israeli Palestinians, and some letup in demolishing Arab homes that contravene building codes. If Abbas succeeds, Arab voting rates, which sank below 50% in March’s election, may shoot up again and significantly increase Arab political power.

It goes without saying that the Palestinians in the West Bank and Gaza will not take kindly to being put on hold till Bibi passes from the political scene and Israel gets its house in order. Whether they can do anything about it is another question, however.

In other words, anyone who thinks that, without Bibi in charge, the peace process will resume, and perhaps even succeed, is bound to be disappointed. This coalition has a certain left-right balance that is only possible because 53 Knesset seats are held by right-wing and/or religious pro-Bibi parties and he will not let them go. The new government’s hold on power is precarious; the defection of a single Knesset member could bring it down, in addition to its self-imposed restrictions on tackling the most important issues facing Israel. How it may proceed, and whether it will succeed, is anyone’s guess.