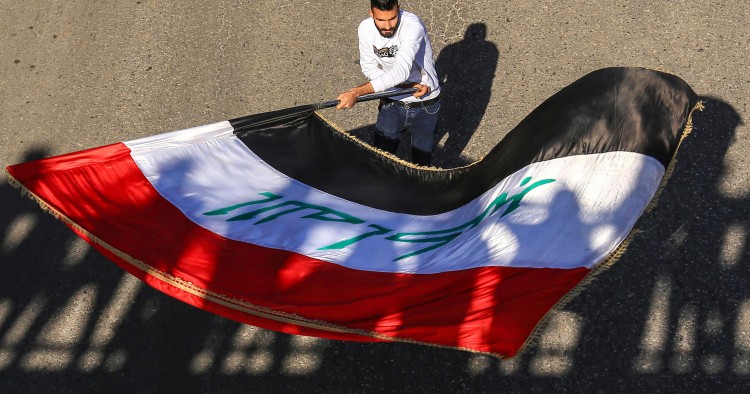 Are religious doctrinal differences primarily responsible for stoking intercommunal fear and hatred? What roles have state, sub-state, and transnational actors played in fomenting sectarian discord? And what could be done to avert sectarian violence; to foster tolerance and peaceful coexistence; and to promote reconciliation? The essays in this series tackle these and other salient questions pertaining to sectarianism in the MENA and Asia Pacific regions. Read more ...

Iraq is key for understanding the trends that prevail in many MENA countries. It is home to various religious and/or ethnic communities, and its political system is federalist in part. In addition, Iraq is subject to foreign influences, including those originating from countries that seem to have a religious bias — such as in the case of Shia Iran. At first glance, this suggests that Iraq is a prisoner of sectarian logic.

Is Iraqi society structurally sectarian? Or does it have a strong capacity of resilience to sectarian trends? This article  explores the nature of Iraq’s political sociology by examining several key indicators: the composition and aspirations of Iraqi society; the nature of the parliament; and the challenges that current Prime Minister Mustafa al-Kadhimi faced as he tried to form a government in spring 2020.

Sectarianism is a reality in Iraq. Ethnoreligious trends prevail at the institutional level. Since 2005, the President of Iraq has always been a Kurd, the Prime Minister an Arab Shia, and the President of the parliament an Arab Sunni.

This sectarian distribution of the main institutional positions is not enshrined in the Iraqi constitution, but is nonetheless rooted in practice. With the fall of Sunni President Saddam Hussein in 2003, Iraq was quick to follow a sectarian path. Arab Sunnis felt weakened;[1] Kurds wanted to capitalize on this historical moment to push for autonomy; Shia saw in post-Saddam elections an opportunity to increase their political representation and get revenge.[2] Christian minorities were the only communities to have emerged in post-Saddam Iraq with little political representation, to have faced multiple threats, and to have dramatically decreased in number.[3]

The Iraqi constitution does refer to sectarian diversity in its preamble. However, there are no statistics regarding the actual percentage of ethnoreligious communities in the country. All the scenarios that try to look into Iraq’s sectarian state of play build on general estimates. According to the CIA World Factbook, Arabs constitute 75-80% and Kurds 15-20% of the country’s population.[4] Shia comprise roughly 55-60%, Sunnis 30-35% (bearing in mind that while a majority of Kurds are Sunnis, some are Shia), and Christians less than 5%. The case of mixed Bagdad aside, the three major groups are concentrated in certain geographic areas: Kurds in the north (alongside some Christian communities), Sunnis in the center, and Shia mainly in the South.

Given these sharply delineated ethnic, religious, and geographic differences, one might be led to assume that since 2003 Iraq’s communities have functioned as rigid blocs whose individual members, bound together in sectarian solidarity, support their co-religionists unconditionally.[5] However, the reality is more nuanced.

It is true that since 2005 parliamentary elections — where Iraqis choose their 329 deputies based on party-list proportional representation — have tended to reflect the sectarian composition of the population, resulting in Shia winning a majority of seats. Yet, it is important to note that parliament is fragmented; deep political fissures exist both between and within sectarian groups. There are at least two main Kurdish political factions. The many Sunni parties disagree over key political issues. Five major Shia coalitions competed in the 2018 parliamentary elections, with the Islamist Fatah coalition alone consisting of 18 rival parties.[6] Since 2003, none of Iraq’s religious communities has spoken in a single voice nor has any of the country’s leading politicians succeeded in advancing a political program that transcends this particularism.

Nationalism, Sectarianism, or Both?

Iraq’s first parliamentary elections in 2005 saw a total of 12 parties and/or coalitions enter the legislature,[7] while in 2018, this number jumped threefold.[8] The fragmentation of the Iraqi political scene may be a sign of democratic health; but it is also the expression of both political opportunism and a deep social frustration. Most Iraqi politicians are engaged in the relentless pursuit of power, and this is why they develop different programs and political platforms; the population also finds in this fragmentation a way to express its anger by either siding with one of these platforms, or rejecting them all.

In 2019, Iraq was marked by a series of protests sparked by a multitude of grievances. The protesters demands were wide-ranging: an end to nepotism, corruption, and unemployment; increased physical security; and improved public services such as electricity, transportation, healthcare, and education.[9] Importantly, there were very few reported flareups of Sunni-Shia sectarian tension during the street demonstrations against the government. For the most part, protests in Iraq have tended to be trans-sectarian. The latest round of such protests, the “October revolution,” revealed clearly that popular discontent is rooted in widely held socioeconomic grievances, and not in narrow sectarian agendas.[10]

Parliamentary Elections and Their Implications

The 2018 parliamentary elections produced an outcome that, on the surface, would seem to confirm the view that Iraqi politics is driven primarily by sectarian affinities and agendas. The general composition of the new parliament varied little from that of its predecessor: 187 Shia (a gain of four seats), 70 Arab Sunnis, 58 Kurds (a loss of five), four Turkmens, and nine members representing other minorities.[11] However, upon closer scrutiny, it is clear that Iraq’s new parliament, far from consisting of unified sectarian blocs, is marked by intra-sectarian divisions and fragmented Shia, Sunni, and Kurdish factions.

The Alliance Towards Reforms (Sairun), a Shia bloc, led the field, capturing 52 seats. Sairun is headed by Muqtada al-Sadr, a Shia leader known for being highly critical of the government’s performance. However, this coalition is also made of several secular and/or non-Shia movements and parties, such as the Iraqi Communist Party and the Youth Movement for Change. Sairun’s political orientation is decidedly nationalist and trans-sectarian.[12]

Seventy Arab Sunnis secured parliamentary seats in the 2018 elections, but all these were distributed between various parties and coalitions, starting with the National Coalition (17 Arab Sunnis). Whereas some of these groups have adopted a pro-Sunni stance, others have embraced nationalism and trans-sectarianism. This situation differs considerably from 2005, when most Arab Sunnis boycotted parliamentary elections[13] in protest against what they regarded as an illegitimate process that would weaken them as a community. This varied political landscape notwithstanding, inter-Sunni disagreements add to the tension that prevails at the parliamentary level.

The historical rivalries that prevail between Iraq’s two main Kurdish political parties are widely known and well-documented. The persistent discord between the Kurdistan Democratic Party (KDP) and the Patriotic Union of Kurdistan (PUK) has contributed to the fragmentation of Kurdish politics, though to a lesser degree than among Iraqi Sunnis and Shia. While both the KDP and PUK strongly favor Kurdish autonomy (and, in the long run, political independence), they do not agree on how to manage the day-to-day affairs of the Kurdistan Regional Government (KRG). There is no indication that political tensions between the two can be defused anytime soon. Nor is there any evidence that Kurds as a whole constitute a single, unified community in political terms.

How to be a Consensual (Shia) Prime Minister

The melodrama related to the nomination of a new Prime Minister is another indication of the limits of analyzing Iraq through an exclusive sectarian lens. After months of polemics and political infighting, Mustafa al-Kadhimi, a former Director of the Iraqi National Intelligence Service, was finally designated Prime Minister in early April 2020. Yet, a month elapsed before he was able to form a government, though even then managing to confirm just 15 of 22 ministers. Among the key positions that initially remained vacant were the Minister of Foreign Affairs and the Minister of Oil.

Although Al-Kadhimi’s candidacy earned an unusual degree of consensus, he nonetheless was subjected early on to pressures and demands from several prominent political figures. His initial backing by Iraq’s main Shia, Arab Sunni and Kurdish political parties was due to the urgent need to find a way out of the six-month-long political deadlock that followed the resignation of former Adel Abdulmahdi in November 2019.

However, the urgency of the moment did not spare al-Khadimi from political pressures and resistance once elected. Indeed, his initial elections for ministerial appointments were quickly rebuffed by key politician figures, notably former Prime Minister Nuri al-Maliki, head of the State of Law Coalition, and Hadi al-Ameri, the leader of the al-Fatah coalition. In both instances, the criticisms of Al-Khadimi’s ministerial appointments were lodged in sectarian terms.[14] Yet, it is important to emphasize that al-Khadimi was elected thanks to the backing of both Shia and non-Shia parties and coalitions, and that he was willing to guarantee diversity within the Iraqi government. This apparent contradiction suggest that Iraq’s political dynamics cannot be fully understood through a sectarian lens.

The Hybrid Nature of Identity Politics

Iraq today is marked by a hybrid form of politics wherein nationalism and sectarianism coexist. When Iraqis flood the streets in protest, they put nationalism over sectarian feelings; however, when they go to the polls, they tend to favor candidates that reflect their ethnoreligious affinities. Whereas fears of a looming sectarian-based territorial fragmentation of the country might be justified, the hybridity of Iraq’s identity politics may be the best guarantee for preserving Iraq’s territorial integrity, and for limiting the damage caused by the mediocrity of the political elite.

[2] Saddam Hussein’s brutality had spared no community: under his rule, Sunni individuals were also persecuted by the Iraqi regime if they were seen as threatening. That said, symbolically speaking, and as some facts have shown all through Iraq’s history, Kurds and Shia did pay the price of Hussein’s tyranny as members of a sectarian community, while the repression that was exerted against Arab Sunnis or even Christians stemmed from ideological or political considerations.

[4] Note that this data is based on a 1987 government estimate. CIA World Factbook, https://www.cia.gov/library/publications/the-world-factbook/geos/print_iz.html.

[5] Note that studies alleging the existence of a region-wide “Shia Crescent” parallel those that adopt a sectarian-based approach to understanding contemporary Iraq.  See, for example, Hanin Ghaddar, “The Shia Vs. The ‘Shia Crescent,’” Comments Policy, Hoover Institution, March 5, 2020, https://www.hoover.org/research/shia-vs-shia-crescent.

[8] For an analysis of these elections, see Zeidon Alkinani, “The outcomes of Iraq’s 2018 elections,” Open Democracy, June 6, 2018, https://www.opendemocracy.net/en/north-africa-west-asia/outcomes-of-iraq-s-2018-elections/.

[10] According to one commentator, “it was the protests of 2018 that mark an era of a post-sectarian Iraq.” See Zeidon Alkinani, “ Post-sectarian Iraq’ between theory and practice,” Open Democracy, January 28, 2019, https://www.opendemocracy.net/en/north-africa-west-asia/post-sectarian-iraq-between-theory-and-practice/.

[11] For an in-depth analysis of these elections and their initial outcome, see Bassel Hussein, “Results of the Iraqi Parliamentary Elections, Changes in Political Practice, and Problems Implied,” Al-Jazeera Centre for Studies, June 28, 2018 (in Arabic), https://studies.aljazeera.net/ar/reports/2018/06/180628112900961.html.

[12] See a presentation of their composition and main orientations at Al Jazeera, https://bit.ly/2LZdr1L (in Arabic).