Neither East nor West: Turkey’s calculations in the Ukraine crisis 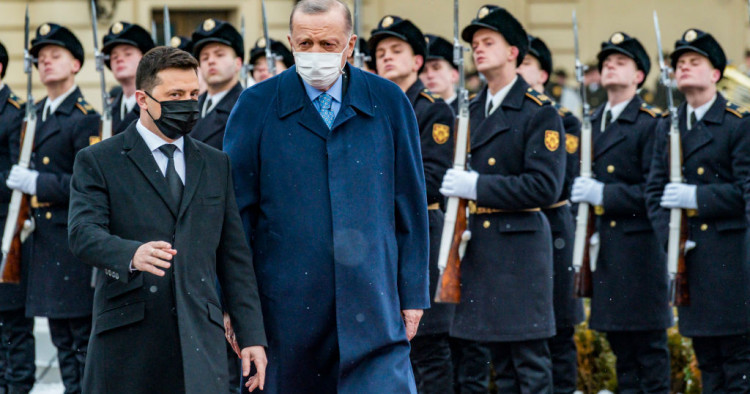 The crisis in Ukraine, from the perspective of Ankara, carries significant risks, but also some opportunity. It is neither a crisis of their own making, nor one that they welcomed; nevertheless, Ankara has clearly developed a basic blueprint for weathering the storm. From the perspective of Washington policymakers, their strategy is likely to hold more frustration than reassurance.

At the same time, a better understanding of how Turkey hopes to weather the Ukraine crisis can serve to clarify some ongoing debates within Washington as to how to conceptualize Ankara’s evolving foreign policy and its place within the NATO alliance.

In recent months, Turkey has been on something of a charm offensive, working (with varying degrees of success) to ameliorate tensions with a long list of countries, including Armenia, Israel, the UAE, Saudi Arabia, Egypt, Greece, and, perhaps especially, engaging in a protracted effort to reboot its strained relations with the United States. The extent to which these efforts represent a serious change in tone for Turkish foreign policy or a temporary recalibration to address isolation and economic crisis is a matter of some debate.

In particular, there are a fair number of voices in Washington who believe that Turkish-U.S. tensions were largely borne of miscalculation and that the two NATO allies are “natural” partners against Russia and Iran. These experts point to the Ukraine crisis as an important opportunity for Turkey and the United States to come together over shared policy goals. Their analysis, I think, is both too optimistic about the opportunities for Turkish-U.S. cooperation that the crisis affords and fundamentally misreads the careful balancing act that Turkey is implementing.

In part, the problem with much of the analysis of Turkey’s foreign policy is that it is viewed from the perspective of Washington’s concerns rather than from Ankara’s. That is, the question is often framed in quasi-civilizational terms of whether Turkey is “turning against the West.” But, there is no secret to Turkey’s foreign policy thinking, which for many years has focused on expanding its regional influence in an increasingly multi-polar and complex strategic environment. Its relations with the West and its role in NATO continue to be important, but they are no longer existential, and they are certainly not seen as a constraint on Turkey’s outreach to Russia, China, or even Iran.

In the current crisis, Turkey’s policy is colored by its long-term ambitions, by its ongoing charm offensive vis-à-vis its Western allies, by its strong economic ties to both Russia and Ukraine, by its own economic travails, and by the realization that too great an offense against either Russia or its NATO allies could have devastating costs. Ankara’s policy on Ukraine is aimed at threading through these competing interests. It is not, perhaps, terribly idealistic. But it is rational.

In 2014, when Russia invaded and annexed Crimea, Turkey’s response was, despite historic ties to the region and to its Tatar minority, decidedly muted. It rejected Russia’s de jure annexation of the region, but accepted with an uncomfortable shrug Russia’s de facto control. Despite serious tensions in the months after Turkey shot down a Russian Sukhoi Su-24 in 2015, ties between them quickly revived. One reason for this is that President ﻿Recep Tayyip Erdoğan and his circle seem to believe that the United States was at least partially responsible for the July 2016 coup attempt. Despite the recent warming in U.S.-Turkish relations, there is no reason to believe that the Turkish leadership has changed its mind. The ongoing prosecution of American scholar, Henri Barkey, and Turkish philanthropist, Osman Kavala, is, after all, premised on this belief. In this context, closer ties, and particularly increased military cooperation, with Russia was an unsurprising choice. It is in this light that Turkey’s decision to purchase Russia’s S-400s missile defense system should be understood — an attempt at coup-proofing, perhaps, but more importantly, a signal to the United States that Turkey was capable of seeking an independent path.

None of this has prevented Turkey from competing with Russia in other spheres, including Libya and Syria, but Ankara and Moscow have, nonetheless, been careful to keep that competition limited in scope. Turkey’s response to the current crisis follows in that same vein. President Erdoğan has been simultaneously critical of NATO’s waffling response and forthright in his condemnation of Russia’s invasion.

In one of the most valuable recent treatments of how Turkey’s elite views the current crisis, Selim Koru argues that, “Ankara does not necessarily think of Russian resurgence as a threat.” He goes on:

"This is because the world view of Erdogan, as well as of the Turkish right as a whole, is much closer to that of Putin than it is to that of Western liberal elites. This may feel immaterial to policymakers, but it is the emotional backdrop to the entire policy apparatus, shaping popular perceptions and strategic culture. …

The Turkish right dreams of a revitalized Turkish sphere of influence, projecting power across three continents. Twenty years at the head of government has allowed them to infuse the country with this vision. Turkey’s founding fathers defeated Western forces in battle in order to build a republic that held up Western modernity as a model. The current government, which can trace its roots to the radical right-wing dissenters from this tradition, seeks to do the reverse. They see the West as an anti-model: a rival to be mirrored, and eventually to be beaten at its own game."

These larger ideological assumptions aside, the most salient factor in the current situation, when viewed from Ankara, is Turkey’s own dire straits. Turkey is in the midst of its most serious economic crisis in a generation and the palpable strains of this crisis on virtually every household has, if polls are to be believed, cut deeply into President Erdoğan’s popularity. With elections scheduled for June 2023, the economic crisis amounts to the most serious political challenge Erdoğan and his ruling coalition have faced since the attempted coup of 2016. In particular, Turkey is reliant on Russia for its wheat and gas. The country is already witnessing, for the first time in decades, popular protests against rising prices for basic commodities. At this writing, the Turkish lira has lost more than 5% of its value since the beginning of the invasion. In this context, Ankara has limited capacity to weather economic shocks and no appetite for undermining economic relations with either Ukraine or Russia.

Ankara, in this context, needs to balance a variety of considerations. It wants and needs to maintain its status in NATO; without it, Turkey is merely another middle power with ambitions. Moreover, Western Europe remains Turkey’s most important economic partner, notwithstanding its decades-long effort to reach out in new directions. It will also do nothing to anger Vladimir Putin and will resist any pressure to initiate economic sanctions on Russia. Experts are divided on whether Turkey has the legal right to close the Turkish Straits, which connect the Black Sea and the Mediterranean, to Russia and Ukraine during this crisis, as Kyiv has requested; barring a radical change in circumstances, Ankara is certain not to do so, as such as step would result in immediate Russian retaliation.

Turkey’s policy in this crisis is to sound assertive, but to act cautiously. If the Russian invasion somehow falters and Ukraine manages to maintain its independence, Turkey will have retained its standing in NATO and will continue to engage in economic cooperation with both Ukraine and Russia. If Russia succeeds and NATO appears toothless, Turkey’s elite will see it as new evidence of Western fecklessness and weakness; it will make its long-term regional accounting accordingly. In a sense, Turkey’s policy today resembles its World War II policy of “Active Neutrality,” in which Ankara made overtures to both the Allies and the Axis, positioning itself to be on the winning side in the end, without risking too much in the process. Then, as now, Turkey balances ambition with vulnerability. It may be a cynical policy, but it is not a stupid one.

Howard Eissenstat is an associate professor of History at St. Lawrence University, where he teaches courses on Middle East History and Politics, and a non-resident scholar with MEI’s Turkey Program. The views expressed in this piece are his own.