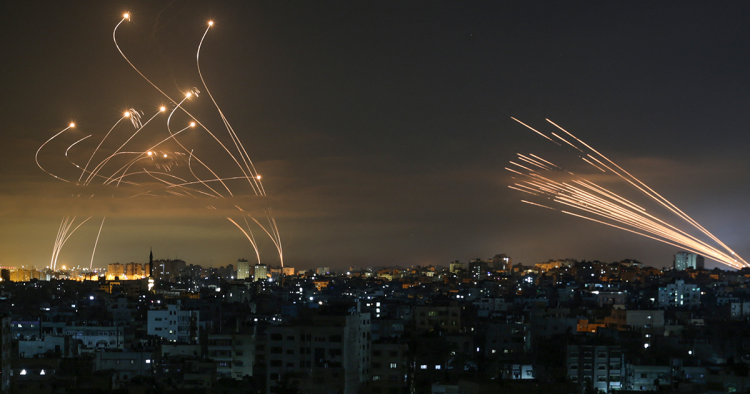 The ongoing (and largely overblown) controversy over the decision by congressional progressives to block the inclusion of $1 billion in additional funding for Israel’s Iron Dome missile defense system, over and above the $3.8 billion in U.S. military aid Israel already receives, has exposed ruptures within the Democratic Party as well as the limits of holding a genuine debate on issues related to Israel/Palestine in Washington. While much of the discourse surrounding the controversy over Iron Dome (the eventual passage of funding for which was never really in doubt) is mired in hysterics and hyperbole, some have put forward a more rational case for providing additional funding for the system. One of the standard arguments advanced in recent days is that Iron Dome is crucial not only for saving Israeli lives but is equally important (perhaps even more so) for saving Palestinian lives. This claim has been echoed by numerous American and Israeli analysts and even Members of Congress, and seems to have been accepted by a number of journalists as well.

But is it actually true?

It should be stated from the outset that there is no way to say definitively what may or may not have happened in the absence of Iron Dome. For one, how does one measure “lives saved,” which is basically a counterfactual? Nor is it possible to isolate the impact of Iron Dome from other factors that determine the deadliness of a given conflict, such as the duration of the fighting, the nature of Israel’s offensive (e.g., aerial bombardment versus a ground invasion), and the political and geopolitical environment (third-party interventions, the seriousness of diplomacy, and even internal politics). The best we can do is to look at the data, particularly casualty figures from previous conflicts — of which, sadly, there is much — for some insights or patterns. Here, the data seems fairly clear. While Iron Dome may have saved Israeli lives, there is no evidence that it has done anything to save Palestinian lives or minimize the scale of destruction on the Palestinian side — and it may actually have done the opposite.

The argument most often put forward is that Iron Dome decreases the possibility of an Israeli ground offensive, which would invariably lead to large-scale casualties on both sides. While this may sound good in theory, it does not actually comport with previous experiences. Two of the last four Gaza wars involved ground invasions by the Israeli army — one in January 2009, two years before Iron Dome was deployed, and the other in the summer of 2014, post-Iron Dome. Yet according to U.N. casualty figures (see table below), the overall death tolls for both sides were much higher in 2014, despite Israel’s deploying of Iron Dome, than in the 2008-09 war: 2,251 Palestinians and 73 Israelis were killed in 2014 compared to 1,385 Palestinians and 10 Israelis in 2008-09.

The higher death toll in 2014 is in part due to the protracted nature of the war, which lasted almost twice as long as the conflict in 2008-09. But there is nothing to suggest Iron Dome made the war less deadly for Palestinians. In fact, the opposite may be true. While ground invasions typically lead to higher military casualties on both sides, including an unprecedented 67 Israel Defense Forces killed in 2014, Israeli air assaults have proven to be far more deadly for Palestinian civilians.

By contrast, a strong case can be made that by minimizing Israeli casualties and economic disruption, Iron Dome essentially provides Israel a “cushion” that enables it to keep on bombing until its leaders are satisfied they’ve achieved their military objectives — the highly subjective and ever-elusive aim of “restoring its deterrent.” Simply put, the less cost Israel pays, whether in human, material, or political terms, the less incentive it has to hold back militarily or to “sue for peace” via diplomacy. This may also explain the more protracted and deadly nature of the 2014 Gaza war, which lasted 48 days and claimed the lives of 2,251 Palestinians and 73 Israelis, in comparison to the most recent conflagration in May 2021, which lasted 12 days and took the lives of 260 Palestinians and 10 Israelis. While Iron Dome featured prominently in both conflicts, the regional and U.S. domestic political environments proved to be far less hospitable to a prolonged war in 2021 than in 2014.

All of this raises a more fundamental question of whether an ostensibly defensive weapon like Iron Dome, when used in the service of maintaining Israel’s occupation or its ongoing blockade of Gaza, or simply to allow Israeli leaders to indefinitely defer a political settlement, still qualifies as defensive. In the end, regardless of where one stands on the current controversy, there is simply no evidence to support the claim that Iron Dome saves Palestinian lives or even mitigates violence. In reality, it is more likely to have cost Palestinian lives by deepening an already vastly asymmetrical conflict and extending Israel’s ability to defer a political settlement indefinitely.

Khaled Elgindy is a senior fellow at the Middle East Institute where he also directs MEI’s Program on Palestine and Israeli-Palestinian Affairs. The opinions expressed in this piece are his own.