Nowhere to hide: The impact of Israel's digital surveillance regime on the Palestinians 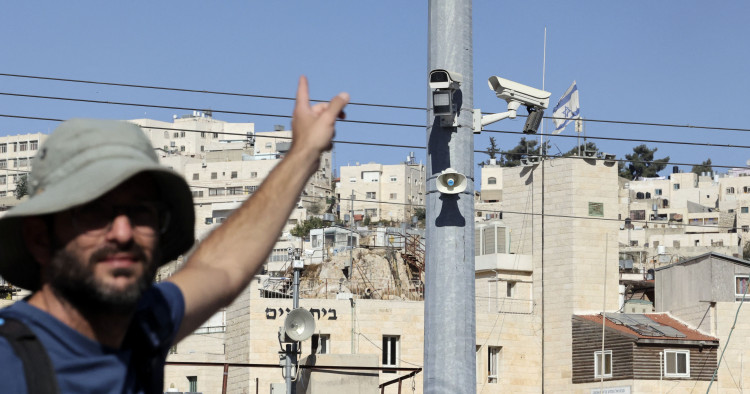 Introduction: How did we get here?

Over the course of 2020 and 2021, groundbreaking investigations revealed in stark detail Israeli authorities’ intensifying use of surveillance and predictive technologies to police and control Palestinians. Subjecting Palestinians to such scrutiny from security and military apparatuses narrows their expressive spaces and plunges them into a state of constant anxiety. This practice also carries out a commercial purpose: Occupied Palestine effectively functions as an open-air laboratory for Israel to test techniques of espionage and surveillance before selling them to repressive regimes around the world. This commerce has troubling implications, particularly as more governments have leveraged digital monitoring tools against political opponents, activists, journalists, civil society workers, and others deemed “threatening.” The case of the Palestinians, then, can be understood as an ominous example of how various actors can probe deep into private lives through the ever-watching eyes of surveillance.

Palestinians are subjected to multiple layers of surveillance, all of which aim to monitor Palestinian voices, restrict freedom of expression, and discourage their autonomy. Surveillance in Palestine bears an uncanny resemblance to the Panopticon, a mechanism of social and psychological control proposed by the English philosopher Jeremy Bentham in the 18th century. At the center of the Panopticon stands a guard in a watchtower. Surrounding the watchman are prison cells, all within his eyeshot, so the prisoners, not knowing whether they are being watched at any given time, are constantly on their best behavior. The French philosopher Michel Foucault, in his analysis of the Panopticon, argued that its purpose is to “arrange things [so] that the surveillance is permanent in its effects, even if it is discontinuous in its actions.” The same megalomaniacal logic undergirds Israeli surveillance: The point is not only to watch Palestinians through strategically placed cameras, but also — and what’s perhaps more insidious — to make them feel watched no matter where they are. Israel’s digital surveillance is thus the latest iteration of the Israel Defense Forces (IDF) tactic of “demonstrating presence,” which promotes Israeli patrols of Palestinian communities for the sole purpose of exhibiting the army’s sprawling reach.

Surveillance lies at the very heart of occupation. As Edward Said wrote in his book Orientalism: “Knowledge of subject races or ‘Orientals’ is what makes their management easy and profitable; knowledge gives power, more power requires more knowledge, and so on in an increasingly profitable dialectic of information and control." Surveillance empowers the occupier by yielding information about the politics, culture, and daily life of the occupied.

Palestinians are subjected to Israeli authorities' digital monitoring on a daily basis, at checkpoints, during protests and social gatherings, and on social media. Palestinians are also subjected to what Shoshanna Zuboff has termed surveillance capitalism, whereby social media companies collect user data for profit through increasingly invasive means of data collection and analysis. In the absence of legislation protecting their right to privacy, Palestinians are particularly vulnerable to such corporate meddling into their lives. Finally, Palestinians regularly experience breaches of their privacy by the Palestinian Authority in its attempt to monitor them and prevent opponents from expressing their opinions.

Palestinians in Gaza and the West Bank living under military occupation have always suffered significant social control and monitoring, often in the form of unannounced raids or searches of their homes and brutal interrogation at border crossings and checkpoints. In the past 20 years, this monitoring has penetrated the digital realm and has been ramped up with digital technologies. Palestinians are routinely monitored in public spaces, as Israeli authorities deploy CCTV cameras in the streets of the Palestinian territory, specifically in Hebron and East Jerusalem. This practice began in the year 2000, when Israel launched its technological and surveillance center “Mabat 2000.” Mabat, meaning “gaze” in Hebrew, has increased the number of cameras. In June 2014, the Israeli government passed resolution No. 1775, which calls for more CCTV cameras in Jerusalem under the pretext of "enhancing security." As a result of the resolution, Israel earmarked 48.9 million NIS ($15.26 million) in 2015 for increased CCTV surveillance in Jerusalem.

This digital monitoring is expanding and honing in on its targets. Israeli authorities have made extensive use of facial recognition technologies through surveillance cameras and smartphones. According to the Jerusalem Municipality, there are 1,000 cameras installed in the city with the ability to identify objects; 10% of these are connected to servers that can analyze data. Some of these cameras can even capture numbers and letters on fixed and moving license plates, impinging on Palestinians’ mobility rights within their own neighborhoods.

Meanwhile, Israeli authorities have installed face-scanning cameras in Hebron, used by soldiers to identify Palestinians without having to check their IDs. This innovation was born of a surveillance initiative that the Israeli authorities implemented in 2020. At the start of the pandemic, while the whole world was fighting to stop the spread of the virus, Israeli authorities were preparing to intrude further on Palestinians’ privacy. This surveillance initiative gave rise to "Blue Wolf," a smartphone app powered by a massive database of Palestinians’ personal information. The database for this application draws from a larger database called the “Wolf Pack,” which seeks to profile every Palestinian living in the West Bank. Each profile contains photographs, a family history, an educational background, and a security rating.

Israel enlists its soldiers to photograph Palestinians without their consent in order to expand the Wolf Pack database. Israeli soldiers are ordered to enter the photos and details of at least 50 Palestinians into the IDF’s Blue Wolf tracking system over the course of each shift. Soldiers who fail to make the quota are forced to remain on duty until they do. They are even competing to see who can harass the greatest number of Palestinians.

The Israeli government maintains control over information and communications technology (ICT) infrastructure in the Palestinian territory, thus depriving Palestinians of their basic right to access affordable, quality internet. Israeli authorities have deliberately kept Palestinians’ internet technology obsolete. While Israel is upgrading to the fifth generation of the internet, Palestinians in the West Bank still use the third generation; Palestinians in Gaza get only the second. Depriving Palestinians of access to new technologies increases the price of the internet while decreasing the security of communication channels. In addition, Israeli authorities now possess the ability to monitor every phone conversation in the West Bank and Gaza Strip. Israeli bugs are implanted in every mobile device imported into Gaza through the Kerem Shalom crossing, without the knowledge or consent of the eventual buyer. Finally, Israel utilizes surveillance spyware, which it manufactures and exports worldwide, against Palestinian human rights defenders. Such surveillance exerts a chilling effect on freedom of expression in spaces of civil society.

In the short term, minor tweaks to daily routines may suffice to alleviate the anxieties of unceasing surveillance, but Israel’s government hopes that in time its cameras will pressure Palestinians into more drastic changes to their behavior. This unabating sense of surveillance threatens to bring about a fragmented society wracked with suspicion and cowed by fear.

Edward Snowden’s explosive disclosures about the mass surveillance of U.S. citizens in June 2013 led researchers to conduct a study to see how users were changing their behavior online. The study demonstrated that, in the wake of the Snowden revelations, there had been a sudden drop in searches on Wikipedia for certain keywords related to terrorism: Al-Qaeda, Hezbollah, the dirty bomb, chemical weapons, and jihad. While fear of searching for the aforementioned terms may not harm an individual’s basic well-being, one can reasonably imagine that Muslims and members of other scrutinized minority groups might hesitate to seek out information online — the hours of prayer at a local mosque comes to mind — that is essential to their realizing an important part of their identity.

Research has also shown that the presence or threat of surveillance leads to a loss of trust and an increase in apathy. Targets of monitoring become inured to it, and, claiming they have nothing to hide, sacrifice their right to privacy. Citizens keep their ideas to themselves and steer clear of initiatives to organize and mobilize resistance to oppression. In other words, surveillance prompts Palestinians to self-censor, which is inimical to the principles of an open society. This is especially the case for those who, like the Palestinians, live in colonized societies or under the rule of oppressive regimes such as in China.

Consequently, surveillance technology in all its forms, be it mass surveillance, CCTV, spyware, call monitoring, or ICT infrastructure control, infringes on Palestinians’ human rights, such as their rights to privacy, anonymity, free expression, and access to information.

One of the most distressing and invasive forms of surveillance used in the occupied territories and around the world is facial recognition technology. A relatively new phenomenon with disturbing privacy implications, government use of facial recognition systems has been banned by at least a dozen U.S. cities, and calls for prohibition have progressed in the EU and even inside Israel. A proposal by law enforcement officials to introduce facial recognition cameras in Israeli public spaces was opposed by the Israeli Cyber Authority and struck down by Israel's Supreme Court, presumably because Jewish citizens of Israel would have been affected. From such decisions, it has become clear that the Israeli government considers the meaning of privacy and autonomy to be variable, subject to distinct logic depending on whose privacy is at stake.

Palestinian activists, journalists, scholars, and citizens have long drawn attention to their humiliation at the hands of innovative forms of surveillance that violate their privacy. In many ways, the case of the Palestinians shows how technologies can be weaponized, particularly as a means of inducing self-censorship and compliance from people living in occupied territories or designated by governments as dangerous or threatening minority groups, as is the case with Uyghurs in China and Kashmiris hounded by India’s Hindu nationalist government. In the Middle Eastern context, the intimidation of activists, journalists, and human rights defenders through technological means has been witnessed in the UAE, Saudi Arabia, Morocco, and beyond.

Palestinians are clearly not the only ones contending with invasive technologies in the digital age, even if they do represent a unique case in that their monitored daily lives feed into the development of cutting-edge methods of surveillance. Given the problem’s global scope, resistance requires not only efforts from Palestinians, but also an intersectional and cross-cutting global campaign to safeguard individual privacy and to counter arguments justifying surveillance.

We need to organize ourselves globally to confront these technologies and pressure our governments to cut ties with manufacturers and suppliers until they comply with international law. We need to reclaim our digital and urban spaces and question the necessity of these surveillance technologies. Unfortunately, government monitoring has been so normalized in the collective conscience that surveillance cameras no longer raise indignation.

The encroachment of military and security forces on the spaces of Palestinians as well as other minorities and colonial subjects sows terror among its targets and constitutes a form of discrimination on racial, ethnic, and national grounds. In the fight against surveillance, nothing less than freedom is at stake. Concerned observers have a duty to collaborate with progressive civil society organizations in the struggle to end the abuse of these technologies by overzealous governments.

Mona Shtaya is a Palestinian digital rights defender working in the MENA region. She works as an advocacy advisor at 7amleh (The Arab Center for the Advancement of Social Media) and is a non-resident scholar with MEI's Cyber Program and an MA candidate in Social Media and Digital Communications at the University of Westminster. The views expressed in this piece are her own.