The Oslo Accords 25 years on 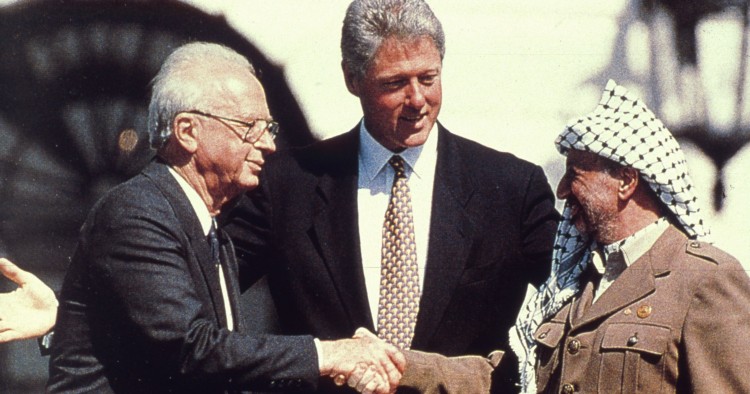 On Sep. 13, 1993, President Bill Clinton presided over one of the most dramatic handshakes in modern history. On the White House lawn, the handshake between Israeli Prime Minister Yitzhak Rabin and the Palestinian Liberation Organization Chairman Yasser Arafat was hailed as a political breakthrough that would constitute the dawn of a new era for the Middle East. Now, 25 years after the announcement of the Declaration of Principles––also known as the Oslo Accords––the prospect of peace appears more elusive than ever. The current administration has the ability to use the diplomatic means accorded to a powerful, third-party state to relaunch the peace process. To do that, however, President Donald Trump ought to take more heed of the accords’ key takeaways.

The Oslo Accords, a series of interim agreements reached between 1993 and 1999, are the product of secret Israeli-Palestinian negotiations facilitated by Norway and recognized by the PLO and Israel. With the 1993 announcement of the Declaration of Principles on Interim Self-Government Arrangements (DOP), the Israeli government and PLO officials committed to a five-year timetable for instating limited Palestinian self-governance in parts of the Israeli-occupied West Bank and Gaza Strip. Although the Oslo Accords did provide partial self-rule for the Palestinian Authority in some areas of the West Bank and Gaza, the accords did not end the Israeli occupation. Neither did they halt Israeli settlement construction in the Palestinian state-to-be: the number of settlers has grown from about 250,000 in 1993 to 600,000 today.

Critics of the accords point to the agreements’ “interim” status to explain their failure. Through its legal structure, the DOP emphasized confidence-building and good faith measures between the two parties, ultimately intended to yield a final status agreement. Known as “constructive ambiguity,” this process deferred many of the most contentious issues of the Israeli-Palestinian conflict: the status of Jerusalem, Palestinian refugees, Israeli settlements, future borders, and security arrangements. Fundamentally, however, it was an asymmetry of power between the Israelis and the Palestinians that determined the accords’ nonfulfillment. Playing the role of a small, third-party mediator, Norway not only failed to counteract the imbalance of power in favor of Israel, but further preserved and reproduced it. This came at the expense of the Palestinians, who were willing to make significant concessions to avoid further marginalization of the PLO and the Palestinian cause.

While the U.S. has both the carrots and sticks to impose a heightened symmetry, Trump has failed to adequately challenge the ongoing imbalance of power. In fact, under Trump’s direction, the U.S. has consistently put forward Israeli-centric foreign policy initiatives that effectively alienate the PA and trivialize the core issues identified in the 1993 accords. With the intent to satisfy his domestic evangelical base and the agenda of Ambassador David Friedman, Trump recognized Jerusalem as Israel’s capital in early December 2017, undoing nearly seven decades of U.S. foreign policy. The recent closure of the PLO’s mission, which acts as the PA’s unofficial embassy in Washington, is another administration move that will not serve any purpose beyond further alienating the PA.

Trump’s Middle East policy also appears bent on demanding political compromises from the Palestinians prior to the announcement of the U.S. peace plan, termed “the deal of the century.” Jared Kushner, the president’s son-in-law and a member of the designated Middle East peace team, has effectively advocated for a “sincere effort to disrupt” the U.N. Relief and Works Agency (UNRWA). In early September, the U.S. cut all funding to the agency, which provides assistance to 5 million Palestinian refugees. Internal emails also indicate Kushner’s intention to strip millions of descendants of Palestinian refugees of their rights and status, a plan that reflects Israeli Prime Minister Benjamin Netanyahu’s description of the UNRWA as “the refugee perpetuation agency.”

Trump seems to be using aid as leverage to return the Palestinians to the negotiating table. The Israelis, on the other hand, have merely faced the threat of a quid pro quo in return for Trump’s recognition of Jerusalem. Speaking at a rally in August, Trump informed the crowd that the Palestinians would soon reap the benefits from the move and get “something very good because it’s their turn next.” This uneven application of diplomatic reward and punishment reproduces the same asymmetries that ultimately led to the failure of the Oslo Accords. As history shows, this need not be the case. Prior to the announcement of the accords in 1992, U.S.-Israeli relations were at their lowest point in decades. The Bush administration’s conditioning of loans on a temporary freeze of settlement construction led Rabin to prioritize domestic concerns over ideologically motivated policies in the 1992 elections. America successfully dangled the carrot, enabling the first major shift of power since the right-wing Likud party had come to power 15 years earlier and paving the way for future peace negotiations.

Trump has thus far failed to utilize the capabilities of a strong, third-party mediator. Rather than enact unilateral decisions in favor of Israel, the president ought to provide a more measured and constructive diplomacy to gain a seat at the negotiating table.