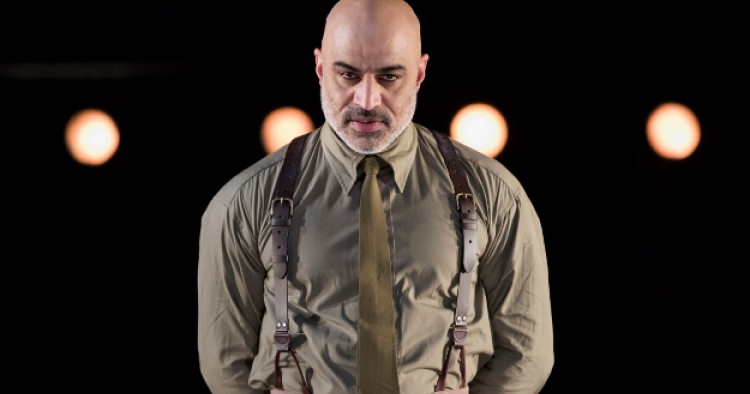 This article was first published by the Shakespeare Theatre Company.

The timing of Shakespeare Theatre Company’s recent production of Othello could not have been more pertinent. This 413-year-old Shakespeare play has worked its way into the current, fiery discourse on Islam, Muslim refugees, Donald Trump and ISIS, offering a sobering perspective with utter disregard for the centuries that lie between. That a 16th-century play can enter so seamlessly in existing political debates is perhaps a greater reflection of our own progress, or lack thereof.

The parallels in context, and content, are striking. Othello, a Moorish Arab—and clearly Muslim in this version of the play—immigrant of a Western state, rose up to the ranks of general and led his ostensibly Christian army against the Muslim “heathens” of the Ottoman Turks. Cut down by a racist backlash when he decides to marry a Venetian Christian woman, Othello—performed by Faran Tahir, himself an American Muslim of Pakistani origin—comes to realize his assimilation in Venetian society has its limits.

The general, irrespective of how many wars he fought on behalf of the Venetian people, could not survive the deeply entrenched, negative stereotypes of Arabs and Muslims within certain segments of Venetian society.

“He is very rudely reminded that you are assimilated to a point,” the lead actor, Tahir says.

“Have I assimilated in this culture?” he asks in response to a question about his own experiences of assimilation, brought forth by playing Othello. “I think, to a large extent I have. But there are parts of me…that give you a different perspective,” he explains before reflectively striking a middle ground. “Assimilation has its places, and then it doesn’t have its places. Being accepted or not accepted is something we have all dealt with to some degree.”

Director Ron Daniels’ astute selection of a lead actor with a similar profile to the character of Othello confronts the audience with the discomfort of their own potential and subconscious stereotypical outlook. This is no mere Shakespeare rendition with a random assortment of actors, but a pointed socio-political message. The visualization of a Muslim of foreign origin (Tahir), playing a Muslim migrant (Othello), maximizes the impact of the anti-racism message being conveyed.

Despite the “parallel” that exists between him and Othello, Tahir says his purpose is to humanize his character. “My focus has never been on glorifying or demonizing anyone, I think it’s the humanizing part that we keep forgetting.”

Tahir, Rufus Collins (Brabantio) and I shared our thoughts in a lengthy exchange about Othello, coincidentally the day of the ISIS terror attack in Brussels. The discussion naturally veered toward a deeper conversation on identity, racism, politics, terrorism and spirituality.

“Othello, in my view, as conceptualized by Shakespeare, is an individual man; he’s neither a race nor representative of a country, and he has particular characteristics that are outside of his community,” Collins surmises.

Through Othello, Shakespeare reminds us that our perceptions of those who appear different are inherently biased and influenced by the imagery and popular descriptions of them. Tahir offered an example to illustrate the point. “If you closed your eyes and heard a woman crying on CNN, let’s say about the Brussels bombing, but you didn’t know the exact details, there is an immediate visceral human connection you feel with that person’s pain. As soon you open your eyes, and you look at the woman, whatever your bias is, pertaining to her color, her clothing, etc., will begin to set in.” By playing Othello and humanizing the character, Tahir is invariably humanizing the ‘image’ of a Muslim for the eyes of those who may have such inherent biases.

The glaring concern that sprung out of the stage—as if a shocking realization to one’s senses—was the direct application of this 16th-century view of Western-Islamic relations on today’s discourse. Have we progressed so little in all this time that we are still engaged in the same debates, the same fears, the same prejudices so eloquently portrayed, and rebuked, by Shakespeare centuries ago?

Perhaps this is the question Shakespeare Theatre Company and Daniels sought to impose on Washington audiences, in the heart of American power where the charged debate on all things Islam finds its way into policy and action.

Reinforcing one of the key messages to come out of Othello, Tahir and Collins lament the constant categorization of people according to their appearances and differences. “We are so quick to attribute certain characteristics to a group of people because it’s convenient and takes a lot of responsibility off us,” Tahir says, which Collins referred to as a “disease.” “This is a disease we have right now, which is we want to categorize more quickly, and we self-categorize. Why? Why do we want to say ‘I’m in this group and not that group?’” Collins adds. That is certainly what Iago did to Othello, and no doubt what forms a significant part of today’s conversation in the West on Islam.

But Tahir is quick to note that such generalizations are also prevalent in Muslim-majority countries, and this is a problem among human groupings in general. “You go to the Middle East, and you hear that America is the root of their problems. Here, Donald Trump’s view could be that it’s Muslims who are the root of our problems, but is that really the truth?”

The somber view of Othello is the resignation that the Western and Islamic worlds are irreconcilable, and animosity and mutual fear will remain the norms that characterize the relationship. The sheer existence of a Shakespeare play on the matter four centuries ago suggests a continuum of historical misperceptions and negativity between the two spheres that coat the opposite ends of the Mediterranean. Othello also raises questions as to the depths of Islamophobia in parts of Western society. Are they so deeply, historically engrained that it is impossible to completely uproot? Are the likes of Trump and PEGIDA merely echoing centuries of Western suspicions of Muslims, as manifested in the Othello characters of Iago and Brabantio?

Tahir warns against dwelling on the negatives in the Western-Islamic relationship and to take note of the strides that have been made. “The distrust is there, and there are people that buy [Trump’s anti-Muslim rhetoric] lock, stock, and barrel, but there’s a huge part of people who don’t,” he says. “Maybe in Shakespeare’s time the information didn’t flow as conveniently as it does today, but we can’t discount all of the bridges we have built. We always want to amplify or extenuate the differences we have created, but we don’t want to look at the bridges or the positives that we have made.”

The lead actor points to the successes of America’s Muslim community. “Let’s face it, the Muslim community in the U.S. has done really well, even with all the biases. We are not, economically, in the lowest bracket, so there is a positive to it—why are we discounting that side of it?”

Another cause of optimism, as Tahir aptly pointed out, was Germany’s decision last year to accept Syrian Muslim refugees, in the face of opposition from many of its European neighbors. “Why did Germany take in Syrian refugees in such huge numbers? That’s a Christian society, but they took them in. So there is a positive side to it.”

All the more reason, perhaps, why Othello today is so pivotal to the current discussion: to breakdown the fear-induced racism, and see humanity for what it is. Shakespeare’s design with Othello, Collins interprets, was to pierce through the negative stereotypes of Arabs and Muslims and reveal the humanity within. “He throws stereotypes and racism at the audience, through Iago and through Brabantio, and it leads somewhere else, to humanity, to this individual humanity.”

The trajectory of Othello appears to follow as such, and one that was loyally adhered to by Daniels. While the racist motives of Iago and Brabantio set the narrative on its course, the emphasis as the play unfolds is less on the ethnic, religious or symbolic attributes of the characters, and more on their intrinsic human reactions to one another. Race, religion and country recede as those standard traits of human behavior—jealousy, love, spite, betrayal—dictate the play’s path and the eventual tragic demise of the main characters.

Othello, proving itself an evergreen play on Western-Islamic relations, serves as a timely reminder that behind the key markers of humanity, such as race, religion and nationality, lies a universality of human characteristics shared by all.