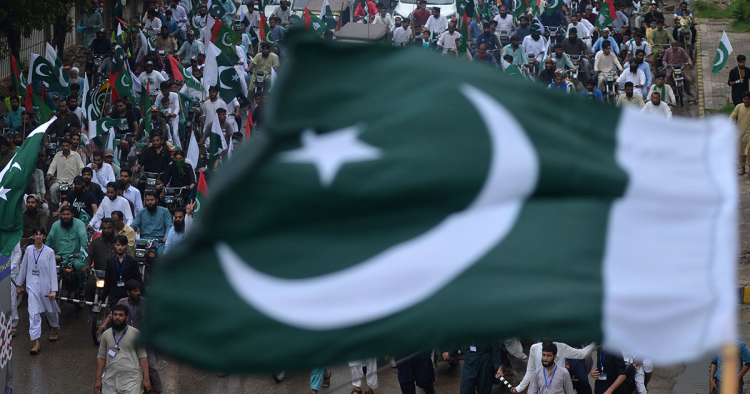 On Aug. 14, Pakistan marked its 75th independence day, like many of the preceding 74, in a state of political and economic crisis. Days later, epic floods would befall the country, submerging a third of it under water.

Once ground zero for the war on terror, Pakistan is now in the eye of the storm that is climate change. It almost seems fated to be the poster child for the great global challenge of any given era.

Yet the Pakistani elite like to speak of their country’s “resilience,” and they quickly grasp onto glimmers of change, like the foreign acquisition of a local startup. The resilience is there and dynamism is present in pockets where it accidentally escapes the capture of the elite.

But the combination of a prolonged and punishing economic crisis, annual extreme weather events, and years of woeful neglect of human development will have profound effects on Pakistan. Together, they make unlikely the prospects of the sustained, rapid, and equitable economic growth necessary to lift its 225 million people out of poverty. The entrenchment of poverty will have immense consequences for the country’s stability and security. Pakistan can no longer afford business as usual.

Is Pakistan’s elite capable of change?

Pakistan is no stranger to tumult. Since independence, it has seen three constitutions, four coups, 23 International Monetary Fund (IMF) programs, and one civil war. This volatility reflects collective failures to maintain a consensus on the rules of the game and address structural challenges to the health of the economy and polity. And yet there are moments when Pakistan’s elite has banded together to achieve vital national aims.

The loss of its eastern half in 1971 cemented Pakistan’s determination to secure a nuclear deterrent. The program withstood several changes of regime. It was initiated by Prime Minister Zulfikar Ali Bhutto and continued under Gen. Zia ul-Haq, the man who deposed Bhutto and ordered his execution. The covert nuclear program’s success ensured Pakistan’s survival as a sovereign and independent country.

The military defeat in 1971 also produced an interlude of civilian supremacy. In 1973, leaders from across the political spectrum came to a consensus on a constitution that made Pakistan a federal, parliamentary democracy.

The 1973 constitution has been suspended or tampered with many times since then by military rulers. And yet the descendants of those politicians who wrote the 1973 constitution partnered in 2010 to fully restore and improve upon it through the 18th Amendment. The 18th Amendment reverted the presidency to a ceremonial post, restored the powers of the prime minister and parliament, and strengthened provincial autonomy.

The limits of reform

The restoration of the deposed Chief Justice Iftikhar Chaudhry in March 2009 defused an intra-civilian dispute over the judiciary and gave momentum to a culture of parliamentary consensus-building that would lead to the 18th Amendment.

Much of the 18th Amendment’s contents were borrowed from the groundbreaking Charter of Democracy, signed by two former prime ministers in exile, Nawaz Sharif and the late Benazir Bhutto, in 2006. This parliamentary consensus-building culture also produced electoral reforms that enabled Pakistan’s first transition of power from one democratically-elected government to another in 2013.

The consensus-building culture, unfortunately, has been largely relegated to issues concerning the distribution of power and resources among major political forces. It has been indifferent to pressing structural reforms — including to the justice system — that directly impact the lives of the common people.

Parties from smaller provinces have long demanded the strengthening of federalism. But they tend to only accept it up to the provincial level and resist devolving power down to more local tiers of government.

The stalling of the devolution process has left large parts of Pakistan at the mercy of a single party for whom the area is a political fiefdom. The absence of competition in these areas has produced startling gaps in governance and human development.

One such area is the rural regions of Sindh. The province has been ruled continuously over the past 13 years by the Pakistan Peoples Party. Over this period, the adult literacy rate in rural Sindh has only grown by 2% — compared to 10% in rural Punjab — and the school enrollment rate has actually declined.

According to the National Nutrition Survey of 2018, over 40% of children in Sindh were underweight — versus around 24% in Punjab — and over 45% were stunted. Sindh also has twice the rate of extreme food insecurity compared to Khyber Pakhtunkhwa.

In recent years, rural Sindh has seen outbreaks of HIV among young children, due to rampant needle reuse by quack doctors. It is this region of Pakistan that has also been most impacted by the floods.

In contrast, more competitive politics has resulted in better human development outcomes, infrastructure, and service delivery in the provinces of Khyber Pakhtunkhwa and Punjab. In Punjab, the Pakistan Muslim League - Nawaz launched the country’s first mass transit projects in decades. Imran Khan’s Pakistan Tehreek-e Insaf party derided these projects as wasteful eyesores, only to later implement them in Khyber Pakhtunkhwa, where it governed.

Sindh Province has also lagged behind on mass transit. The launch of its new bus service in the city of Karachi has been haphazard, reflecting few, if any, of the mass transit best practices adopted by Khyber Pakhtunkhwa and Punjab and none of the lessons learned from their experiences.

Yet, as poor as conditions are in Karachi, it is rural Sindh that risks behind left behind. And it is this part of Pakistan that has been hit hardest by climate change, including the recent floods. Climate change will only compound the effects of state failure and corruption, and entrench intergenerational poverty. Eventually, an aggrieved public will look to extra-systemic means for relief.

Making Pakistan work for its people

As fractious as Pakistan’s elite is, the country’s rich have only gotten richer in spite of the political and economic volatility. And this is because the chaos has, in general, been of the managed type. When push comes to shove, the army rebalances support from one party to another. The IMF comes in with a bailout and friendly countries pour in funds.

And if the political temperature gets too hot, politicians flee abroad. Their kids study at schools like Cambridge and Columbia and live cosmopolitan lives in the West. Then, when the opportunity comes, they return home and their political careers are “launched” by political machines with the patronage of business barons, the support of allies in the media, and, sometimes, the assistance of the army.

To be clear, some among the elite have suffered imprisonment or — most prominently, in the case of the Bhutto family — paid the ultimate price for opposing powerful forces. More recently, Imran Khan’s confrontation with the army is taking an ominous turn.

Still, Pakistan’s elite has been resilient, and in recent times, it has materially prospered far more than before. There is a lot of money to be made. These days, Pakistan’s senior army officers, business barons, political notables, and other powerful forces appear to live by former Chinese leader Deng Xiaoping’s mantra: “To get rich is glorious.”

There is, however, nothing glorious about Pakistan’s ground realities. In fact, much of that ground — a third of the country — is a giant lake at the moment. And this is the result of not just exogenous, climatic forces, but also of the failures of those in power.

Whether it’s the economy, politics, or marketplace of ideas, the ability of Pakistan’s powerful forces to choose the winners and losers must come to an end. The monopolies have to be phased out. Power should be devolved down to the local level. And the interests of the people have to be centered. It is only through their empowerment that the country as a whole can advance.

Regional countries like Bangladesh, China, Thailand, and Vietnam have seen impressive economic growth and improvement in human development in the absence of institutionalized democracy. But Pakistan is too big and diverse for one person or party to save.

Enduring change cannot come through the whims of a “savior” general or politician, but through a government that is by the people and for the people. For Pakistan to exit the path of state failure, it needs a better, more responsive, and more accountable democracy.

Arif Rafiq is the president of Vizier Consulting LLC, a political risk advisory company focused on the Middle East and South Asia, and a non-resident scholar at MEI. The opinions expressed in this piece are his own.