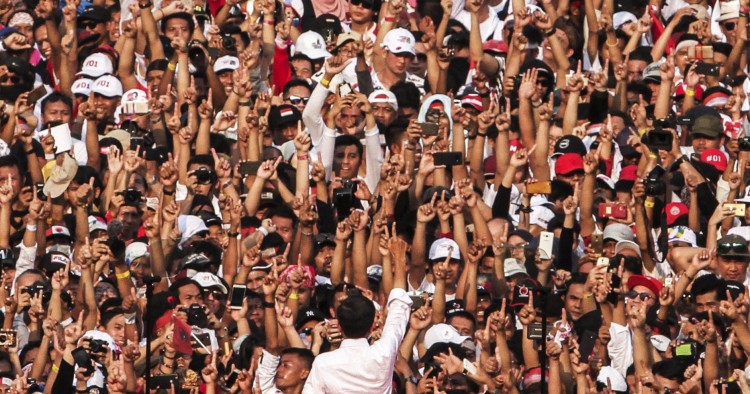 On the surface, the victory of Joko Widodo (or Jokowi) over Prabowo Subianto for the second time in the 2019 presidential election with a comfortable margin and little criticism from international election observers has cemented the reputation of Indonesia as a bastion of democratic stability in the world’s most populous Muslim country. Jokowi managed to defeat Prabowo by successfully employing a recycled populist campaign message and, despite his incumbency, casting himself as the embodiment of a democratic political outsider.[1] Furthermore, the conservative Islamist that backed Prabowo in 2014 and 2019 was kept at bay.[2] However, Indonesia, the world’s largest democratic Muslim country, is not immune from the worldwide trend of populism channeled by strongmen leaders promising to challenge the corrupt status quo on behalf of “the common people.”

Within the academic literature on Indonesian politics, a consensus appears lately to have emerged that populism, Islamism, and democratic regression are the three fundamental, mutually reinforcing forces responsible for impeding Indonesia’s democratic consolidation since the fall of Suharto’s New Order regime in 1998.[3] But do the empirical polling data of the Indonesian electorate support this hypothesis? Our 2018 national polling data analysis tries to interpret and clarify the debate surrounding the issue of populism and how it relates to Islamism and democratic regression.

What is Indonesian populism and how prevalent is it?

Populism is generally represented as the pitting of ‘corrupt elites’ versus the general will of the ‘pure people’ (i.e., defined by anti-status quo sentiment); an emphasis on rule by the ‘pure people’; and the restoration of the primacy of the people by a charismatic leader.[4] However, populism is a thin, abstract concept[5] that can travel and attach itself across a wide ideological spectrum. In the Indonesian case, as Mietzner has observed, a charismatic populist leader can successfully appeal to Islamists as well as pluralists in circumstances where preexisting social divisions are aggravated by active politicization of those divisions.[6] This is not much different from the US case, where the white working class, which constitutes the bulk of Donald Trump’s support base is pitted against the minority classes.

Our representative national survey in September 2018 through face-to-face interviews with 1,220 respondents used eight measures embedded within the survey questionnaires to gauge the level of populism and populist attitude of Indonesian electorates. These eight items were adopted from Van Hauwaert and van Kessel (2018)[7] and Akkerman, Mudde, and Zaslove (2014).[8] We asked respondents to indicate their level of support in response to eight statements:

Each respondent was asked to answer each item by using a five-point Likert scale (1 = strongly disagree; 2 = disagree; 3 = neutral; 4 = agree; 5 = strongly agree). The eight measures are intended to indicate the level of support for statements that reflect populist sentiment in the vein of the three main aspects defining populism explained beforehand. The Cronbach’s alpha coefficient for the variables used to measure populist attitudes is 0.767, meaning that the variables have a high degree of internal consistency, and this suggests that the items in the test are highly correlated. The average score is 3.59, which means that in general Indonesian electorates hold a high support level for populist views. This score is slightly higher than what Akkerman, Mudde, and Zaslove found in the Netherlands’ case at 3.51.[9] By following the research of Fossati and Mietzner (2019), we set a threshold to determine whether an individual is considered populist or not.[10] As a result, we determined a composite index: the arithmetic mean of responses based on eight items regarding agreement on populist views above. Values 1-3.999999 on the composite index are recoded to 0 (classified as non-populist), while grades 4-5 are recoded to 1 (populist). The findings displayed the composite index result of 32% of Indonesian sample electorates who held populist attitudes against the 68% of non-populist respondents. Simply put, almost a third of voters across Indonesia can be categorized as populists.

The determinant of populism in Indonesia

So, who constitute the populists in the Indonesian context? Can we derive any conclusion based on the national polling? In order to answer these questions, we conducted a linear regression analysis, with the dependent variable being a composite variable based on answers to the eight items above with the value between 1 and 5. We examined the extent to which demographic variables such as gender, age, rural-city, religion, education, income and region can explain the possibility of a person becoming a populist. We also included the respondents’ views on the national economy. We hoped to find those who judge the national economy as deteriorating to be populist. We also posited the hypothesis that social inequality drives a person to become a populist.

In addition to these economic variables, we also incorporated electoral politics variables, in which we suspected that those who claimed to vote for Islamic parties such as PKS, PPP, and PBB tend to be more populist than the constituents of nationalist parties. We also suspected that Prabowo supporters would display more populist tendencies than Jokowi supporters, in light of the fact that Prabowo has deployed a populist narrative since his first presidential campaign in 2014. To test the extent to which Islamism correlates with populism, we included many questions that serve as proxies for Islamist attitudes such as: support for the Indonesian Islamic Council’s (MUI) fatwa declaring Ahok’s controversial speech in Kepulauan Seribu  during his rule as Governor of Jakarta to constitute blasphemy against Islam; support for the 2016 Islamist movement; and disapproval of the statement that religion should be separated from political affairs. Finally, we examined whether preference for democracy as the best system of government is negatively correlated with populism.

Our regression analysis of the representative public polling showed interesting findings. Almost all demographic variables are not statistically significant in determining whether a person can be categorized as populist or non-populist. The only demographic variable associated with populism is age, where the younger the respondent the more prone s/he is to be exposed to populism. Economic variables also fail to explain populism. Likewise, social inequality is not a significant predictor. Regression analysis also proves that support for Islamic parties and Prabowo is not correlated with populism. This means that the perception which emerges that Prabowo supporters and constituents of Islamic parties are fertile breeding ground for populism in Indonesia has not been confirmed upon deeper quantitative analysis. We detected that populist attitude were as likely to be displayed by the supporters of Jokowi and Indonesian nationalist parties.

Is populism exclusively related to Islamism?

Prabowo’s populist presidential campaign in 2014 and 2019 attracted the support of conservative Islamist elements and thus generate a general hypothesis that Islamism and populism are self-reinforcing ideological forces in the context of Indonesian politics. Yet our regression analysis has undermined the hypothesis that populism is exclusively related to people with Islamist attitude. Of the three variables of Islamism, two of them do not correlate with populism, namely support for the MUI’s fatwa on Governor Ahok’s blasphemy case and support for the anti-Ahok Islamist movement in 2016-2017. This result is consistent with the insignificance of the support variable for Islamic parties and Prabowo. There is only one variable regarding Islamism which correlates with populism, but in general Islamism and populism are in mutually exclusive ideological realms.

The finding above confirmed the theory advanced by Fossati and Mietzner (2019)[11] and Mietzner (2020)[12] that populism is a thin ideology that can infiltrate a wide political spectrum, and showed strongest indication at the opposite end of the ideological spectrum in Indonesian politics, namely among the pluralists who predominantly backed Jokowi and the conservative Islamists who threw their support behind Prabowo.  In other words, populism can infect secular pluralists who support Jokowi as well as Islamists who support Prabowo. Paul Taggart (2000) likened populism to a chameleon that can change the color of its skin to adjust to its environmental conditions[13] — an apt metaphor in the case of Indonesia.

Interestingly, the hypothesis that democracy correlates with populism is confirmed empirically. We recoded as “0” those who answered “(a) Whatever governmental system we adopt, democracy or authoritarianism, makes no difference, and (b) Under certain circumstances, a non-democratic government system or authoritarianism is acceptable for our country.” We recoded as “1” those who answered “Although it is not perfect, democracy is the best system of government for our country.”[14] The analysis showed that citizens who are pro-democracy tend not to support populism. This suggests that the preference for democracy will erode populist attitudes; and conversely, that the more support a respondent displays toward populist views, the less support s/he expresses for democracy as the best system of government.

What’s next for Indonesian democracy?

By now, we have established that populism indeed presents a challenge for democratic stability in Indonesia. The empirical analysis is disturbing to say the least, since as many as one-third of Indonesian voters tend to express support for populism. Our opinion survey analysis, which showed that younger Indonesian electorate tends to display a more supportive attitude toward populism, also raises an alarm, as it indicates that democratic regression within this young democracy is increasing.

The Economist Intelligence Unit showed Indonesia’s democratic index has declined three years in a row.[15] In 2016, Indonesia was still ranked 48th out of 167 countries studied. Indonesia’s democracy ranking fell to 64 in 2018, with a score of only 6.39 — at the bottom rank of the “flawed democracies” category. As mentioned at the outset, the phenomenon of democratic recession and the emergence authoritarian leaders is the most disturbing global political development of our time — a worldwide trend from which Indonesia is not immune. In its latest report, Freedom House (2020) noted that 25 of 41 established democracies have experienced a decline in democracy for 14 years in a row.[16] Unlike in previous democratic recessionary periods, where the army or other non-democratic players were the primary actors driving the recession of democracy, the vanguard of the decline of democracy today is the populist politician with a strongman persona who enjoys broad support among the citizenry.

Our study confirms the previous work by Aspinall, Fossati, Muhtadi and Warburton (2019) showing that the decline of democracy in Indonesia is not the handiwork of the political elite alone, but is due to the reinforcing dynamic of voters[17] disillusioned with the worsening social economic inequality in capitalist democratic system of government. In other words, the democratic recession in Indonesia is partly attributable to illiberal and authoritarian attitudes among the citizens.[18] Mietzner and Muhtadi’s study (2018) also shows an upward trend of political and religio-cultural intolerance among voters[19] — a trend which coincides with the increasing populism in Indonesia.

The large proportion of Indonesian voters, especially young voters, infected by the populism is a dangerous sign that democracy in Indonesia has come under assault. Unchecked, populism breeds the kernel of authoritarianism, which presents a mortal threat to the principles of pluralism and protection of minorities enshrined in the country’s Constitution and to the functioning of a liberal democratic system.

[2] It is important to recall the conservative Islamist movement’s success in toppling Ahok (or Basuki Tjahaja Purnama), the ethnic Chinese-Christian governor of Jakarta, through mass public demonstrations in 2016. Thereafter, Ahok’s opponent, Anies Baswedan, rode the wave of these socio-religious sentiments to victory in the 2017 Jakarta gubernatorial election.

[6] Marcus Mietzner, “Rival Populisms and the Democratic Crisis in Indonesia: Chauvinists, Islamists and Technocrats,” Australian Journal of International Affairs 74, no. 4 (2020).

[7] Steven M. Van Hauwaert and Stijn van Kessel, “Beyond Protest and Discontent: A Crossnational Analysis of the Effect of Populist Attitudes and Issue Positions on Populist Party Support,” European Journal of Political Research 57, no. 1 (2018): 68–92.

[8] Agnes Akkerman, Cas Mudde, and Andrej Zaslove, “How Populist Are the People? Measuring Populist Attitudes in Voters,” Comparative Political Studies 47 (9) (2014): 1324–1353. Our thanks to Eve Warburton for introducing these measures and providing invaluable insights in designing this survey.

[9] Akkerman, Mudde, and Zaslove, “How Populist are the People?” online appendix, 2.

[12] Mietzner, “Rival Populisms and the Democratic Crisis in Indonesia.”

[14] Our thanks  to  Saiful  Mujani  for  introducing  this democratic  preference  measure in the case of Indonesia.