Putin in Palmyra: How Russia won the “truth” battle in Syria and learned lessons for Ukraine 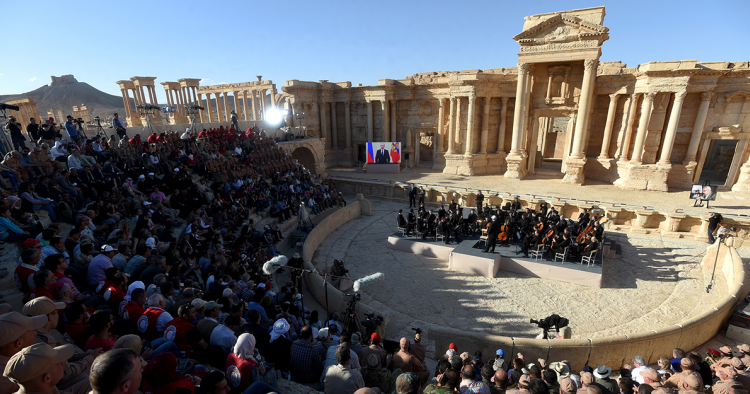 When Russia entered the Syrian war in September 2015, I started to watch RT, Russia’s state-controlled TV network. That’s a six-year dose of studying how Russia projects its worldview to a global audience, a master class in alternative reality and information manipulation. These same techniques are now being reprised in Russia’s reporting of its “special military operation to liberate Ukraine from neo-Nazis.” All independent media outlets in Russia have been forced to close, ensuring that only President Vladimir Putin’s version of events reaches Russian ears and eyes.

The Arab proverb, “He who speaks the truth must not pitch his tent near ours,” might have been written for Putin. With skills honed through decades of working for the KGB, including time spent as a liaison officer to the Stasi in East Berlin, President Putin is a true aficionado of the art of disinformation. He knows how important it is to seize the narrative from the outset and never to deviate from the script. Syria provided him the perfect training ground for Ukraine. RT journalists were allowed free rein inside the country to report the Russian government’s version of events, while Western journalists were denied visas. Russian media repeatedly discredited the work of the White Helmets, whose first-hand film footage of Russian and Syrian regime airstrikes on schools, hospitals, and markets across the country flatly contradicted Russian propaganda. The BBC extensively researched and exposed this tactic in their Intrigue: Mayday podcast series.

To counter Western outrage in Ukraine, Putin uses tactics familiar from Syria, claiming Russian attacks were faked or that Ukrainians themselves conducted them as part of an anti-Russian smear campaign. In Syria Russia claimed to conciliate, while simultaneously denying humanitarian aid to rebel-held areas under siege, in the same way that humanitarian corridors for the evacuation of civilians are routinely thwarted in Ukraine. Residents under siege in Syria were given the choice — starve or surrender. When they eventually surrendered, the Russians brokered “reconciliation deals,” which were then reneged on. Russia used “de-escalation zones” as temporary strategic measures, allowing it to buy time to refocus on military efforts in other areas, exactly as it is doing in Ukraine now. In Syria it then broke the de-escalation agreements, blaming the “terrorists” for violations. To this day, the false narrative persists in many Western quarters that the Syrian war was all about fighting “terrorists” like ISIS. But research has established that more than three-quarters of the deaths in the Syrian war were perpetrated, not by ISIS terrorists and other extremists, but by the Assad regime and its supporters — Russia, Iran, and Hezbollah. ISIS and its ilk killed just 6%. Rarely did Bashar al-Assad and his Russian bosses target ISIS. Instead they went after the moderate opposition — as did ISIS — well aware that they were the real threat. Of the half million Syrians killed, the overwhelming majority were innocent civilians, women and children, not “terrorists.”

As reports mount of chemical weapon use by Russian forces in Ukraine, expect more lessons learned in Syria. Russian media claimed the numerous horrific photos of dead gassed Syrians, uploaded by witnesses at the scene, were fakes, using “actors.” When teams from the Organization for the Prohibition of Chemical Weapons (OPCW) tried to reach sites to collect evidence, they were barred for “security reasons” and told that soldiers were making the area “safe.”

While Russian-sponsored trolls and bots were active on social media in support of Syria’s President Assad, just as they are today in support of Putin’s actions in Ukraine, Assad apologists, including respectable British academics and Members of Parliament, were seduced into parroting these Russian memes, causing untold damage to public perceptions of the Syrian war. The Times newspaper conducted its own investigation into such people. In April 2018 I myself travelled with a delegation dubbed “the Crazy Club” to undermine its message from within. Invited to visit and tour Syria by the Syriac Orthodox Church, we were treated like royalty, and it was easy to see how Christians throughout the 11-year war chose to align themselves with Assad to ensure their own survival. The same thing is happening today with the Russian Orthodox Church, where Patriarch Kirill in Moscow is standing by Putin, giving the Ukraine invasion his blessing and branding it “a Holy War.” By contrast, a multi-faith mission of Christians, Muslims, Jews, Hindus, and Buddhists led by Rowan Williams, former archbishop of Canterbury, has travelled, at some risk to themselves, to Ukraine to meet refugees, hoping to persuade President Putin and the Russian Orthodox Church of the error of their ways. Williams is even supporting calls for the Russian Orthodox Church to be excluded from the World Council of Churches.

If only a similar high-level multi-faith group had spoken out years ago against the way both President Assad and President Putin have used their relationships with the Orthodox Church to project themselves as guardians of the minorities, the war might have taken a different course and much bloodshed might have been avoided.

Instead, tragically, despite initially appearing to support anti-Assad protesters, Western governments, weary of Middle Eastern conflicts, and with no appetite for involvement, kept their distance, leaving a vacuum that first ISIS in 2013 and then Russia in 2015 stepped in to fill. Their inaction was a gift to Russia, emboldening Putin to pursue his goals in Ukraine.

Putin understood from the outset how to ensure Russia benefitted from the conflict. He enlarged the Russian naval base at Tartous and developed an air base at Hemeimeem near Latakia, extending the Russian state’s lease to operate them by 49 years. A Russian an import-export village was established in Latakia port after 2015 and Russia’s military hardware was showcased. Putin boasted of testing over 320 weapons systems in Syria, while 85% of Russian army commanders gained combat experience in Syria. The cruelest and most efficient of them, Gen. Alexander Dvornikov, has now been appointed to take charge of operations in the Donbas region of eastern Ukraine.

Neither nation-building nor reconstruction were ever on the Russian agenda in Syria. On the contrary, the Kremlin was content to have a client state that was just stable enough to safeguard Russia’s interests, but not so strong that it no longer needed Moscow’s protection. The same is likely to be true in Ukraine, with Russia spending just enough money in areas it considers strategic, but avoiding large-scale investment that would bog it down, as happened in Afghanistan. Unlike Western governments that require clean endings and to bring their troops home, Russia has shown in Syria that it is comfortable with protracted low-level conflict, often using mercenaries as cannon fodder. In Ukraine battle-hardened Syrian soldiers are said to be recruited at 25 times their Syrian salary to fight for Russia. The Russian TV network Zvezda News, owned by the Russian Ministry of Defense, posted a recent video showing Brig. Gen. Suhail al-Hassan, “The Tiger,” commander of the Russian-backed elite 25th Special Mission Forces Division, involved in air landing operation drills in northern Syria. The Russians are clearly in charge, while the Syrian soldiers are interviewed afterwards, raving about the experience and praising their Russian trainers. Russian media likewise show upbeat interviews with Syrian soldiers purportedly queuing up to fight for Russia in Ukraine, while Western media report coercion among Syrian recruits, who acknowledge that 90% of them die.

Today Syria is a puppet state, with Russia controlling security and defense, while Iran has taken charge of the religious and cultural files. An Aleppo businessman summed up the situation well, describing Bashar as “a man with two false legs, one Russian, one Iranian, hopping from one leg to another as the ground he is standing on is very hot.”

As for the Russian propaganda climax, that came in Palmyra on May 5, 2016. Knowing the world was fascinated by the fate of Syria’s most iconic ancient site, a magical trading city in a desert oasis first seized by ISIS in 2015, Putin flew in a Russian orchestra from Moscow, led by his favorite conductor, to stage a victory concert in the Roman theater after Russian forces helped recapture it from ISIS. To crown it all, with the eyes of the world watching, Putin popped up by videolink on the Palmyra stage to project himself as “the Savior of Syria,” the only international leader truly fighting terrorism. Pocketing massive credit, it was the moment he moved from the Palmyra stage to the world stage, his dream come true, a global player at last.

Soviet ties to Syria go back to the 1970s when the USSR was Syria’s main economic partner and one of its strongest political and military allies. Hafez al-Assad’s long-term vice-president from 1984-2005, Abdel Halim Khaddam, said in an interview from exile in Paris: “You have to understand that, at some point, practically half the Syrian population worked for the Secret Police. Remember that we were formed by the Soviets. That’s why they were so powerful. The intelligence services soon became the main factor in maintaining the regime. The model was the KGB or Stasi. They were everywhere. Thousands of Syrians went to Russia to train and study, learnt Russian, and married Russians.”

Putin has learned much from his Syria playlist, tactics perfected over the years in which he had a free hand in the country. After the fighting in Ukraine is over, with many cities reduced to empty shelled buildings, expect the same tactics employed in Syria, where the regime confiscated all property from people it deemed “terrorists,” using new laws on land it had taken to prop up regime agendas and create facts on the ground, a sly way of gaining revenue while avoiding sanctions.

Today, ironically, I can no longer watch RT on Freeview, Sky, or other Western media channels because, just days after Russia’s invasion of Ukraine, it was taken off the air across Europe and the U.K., deemed “unfit to hold a license.” If only such a concerted Western consensus had been garnered against Russian disinformation in Syria, providing a challenge to the Russian and Syrian regime’s narrative that it was always “fighting the terrorists,” the Syrian war might, in my view, have ended by now, instead of dragging on into its twelfth year. May the Ukraine war at least not share that fate.

Diana Darke is a non-resident scholar with MEI's Syria Program and an independent Middle East cultural expert and Syria specialist. She is the author of My House in Damascus: An Inside View of the Syrian Crisis (2016), The Merchant of Syria (2018), and Stealing from the Saracens: How Islamic Architecture Shaped Europe (2020). The views expressed in this piece are her own.