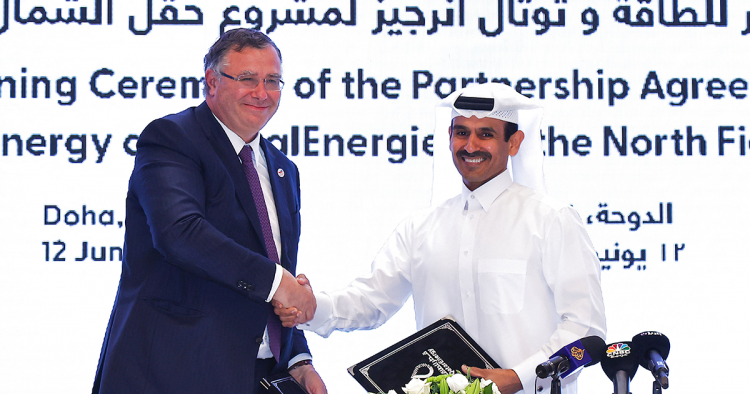 Throughout the month of June, Qatar Energy, the state-owned energy company responsible for delivering the newly named North Field East Project, captivated the attention of global energy players. After more than six months of bid evaluation, the Qataris have selected ExxonMobil, ENI, Total Energies, and ConocoPhillips as partners in the drive to expand their liquefied natural gas (LNG) capacity. Rumors persist that another partner announcement is pending. One major global LNG player, Shell, was awarded equity in the project on July 5. Chevron has also been rumored to have bid on the project. While all partners have minor interests, the Qataris have publicly secured participation from representative Western energy players.

Press reports indicate that Qatar is also in discussions with two major Chinese state-owned entities, Sinopec and China National Petroleum Corp. (CNPC). China has been actively courting the Qataris in an effort to diversify its LNG supply, which has been dominated by Australia, the U.S., and Russia. Securing a long-term position in the project and material offtake volumes would reduce its dependance on the volatile spot market and stabilize supply.

The 32.0-million-ton-per-annum (Mtpa) North Field East Project will add another 4% to global LNG capacity, with the North Field LNG projects now contributing more than 14% of total global LNG capacity. The Qataris have deftly leveraged their domestic resources into a global relationship builder, reducing regional market risks and managing geopolitical risk while focusing on commercial success. Completion of the North Field East Project in 2026 will ensure the Qataris retain the world number two slot in LNG production behind only the U.S.

For 12 years from 2005 to 2017, the North Field had been under a development moratorium. With the lifting of the moratorium Qatar announced an aggressive new development plan to expand LNG export capacity from the current 77 Mtpa to 110 Mtpa by 2026. The final investment decision (FID) on the project was taken solely by Qatar Energy in February 2021. The intent has been to bring in foreign partners as co-funders, while maintaining project control.

The $30.0 billion development project involves four liquefaction mega-trains at 8.0 Mtpa each, resulting in 32.0 Mtpa of new LNG production. North Field East will be the largest LNG project by liquefaction capacity undertaken to date by the industry. Qatar Energy has ensured that a global array of engineering and construction contractors will build it. Spanish, Chinese, Japanese, French, and Korean firms have all secured material contracts for various sectors. The selected contractors hail from markets that will ultimately receive Qatar LNG volumes.

According to press reports, Qatar is also in discussions with two Chinese national companies, Sinopec and CNPC, which are rumored to take a minor stake (around 5%) in two liquefaction trains. For the Chinese, the investment is less about generating economic returns and more about securing a seat at the table to observe how the project and LNG supply business is developed. China will view any acquired interest through more of a strategic lens than a commercial one. China was an early partner for many U.S. LNG projects, but during the Trump administration U.S. LNG supply became increasingly political and the current administration has done little to de-escalate the China-U.S. relationship. This has driven China to seek long-term supply from more apolitical suppliers.

Based on the chart above, Qatar Energy will retain 78.75% equity in the four-train project, having sold 21.25% thus far. With an estimated total cost of $30 billion, the announced deals have raised $6.40 billion in project funding, leaving Qatar Energy with a balance of $23.6 billion. With the announced Shell participation, the Qatari balance would decrease to $21.75 billion. The estimated LNG cost per ton is approximately $1,100, which is by no means a low-cost leader, and is comparable to U.S. LNG project costs. The Qataris will still have plenty of room to allocate minor equity interests in the future to strategic partners such as Korean, Japanese, Taiwanese, and possibly Indian companies.

With the first LNG expected in 2026, the Qataris and their partners will hit the global market as demand surges due to geopolitical issues. Global LNG demand growth has rebounded strongly post-COVID and Asian markets, especially China, continue to seek diversified LNG supply for strategic reasons. This comes as some LNG projects are “retiring” and others are suffering from feed-gas supply issues (e.g., Atlantic LNG, Angola LNG, Nigeria LNG). In addition, the European Union’s (EU) pivot away from Russian-supplied piped gas has resulted in LNG import capacity build out as that market seeks global LNG supply. No doubt, the partners are selling the LNG volumes today into a world hungry for LNG. The strong sellers’ market will ensure firm LNG contract prices and robust project economics and place pressure on the Qataris to deliver that first LNG as forecasted in 2026 or sooner.

The 32 Mtpa of new LNG will provide some comfort to the EU as it weans itself off of Russian supply. Asian markets, China specifically, will take material volume too. LNG offtake agreements and buying price will drive the volume delivery, especially in the EU. China will take a more strategic supply approach.

Longer term, Qatar is planning a second expansion phase, known as North Field South. That project will constitute two additional 8.0-Mtpa trains, raising Qatar’s total LNG output to 126 Mtpa by 2027. Many of the project contracts awarded to date include options for expansion, thereby reducing the planning and contracting phase of the project development. It is expected that many of the partners for North Field South will be the same as those on North Field East.

The massive North Field expansion projects will provide long-term stable LNG supply to the global market and generate handsome economic returns for the Qataris and their business partners.

Wayne Ackerman has more than 30 years’ experience in the upstream exploration and production sector and major capital project development, including LNG. He is also the founder and president of Ackerman and Associates Global Consulting, LLC, and a member of the Advisory Council for the Program on Economics and Energy at the Middle East Institute (MEI). The views expressed in this piece are his own.