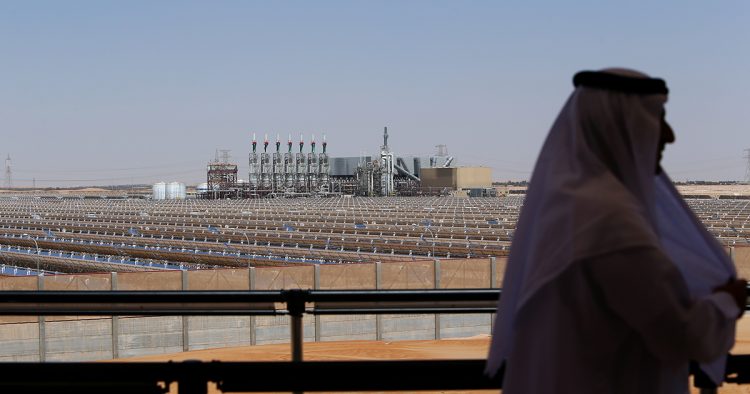 The Arab Gulf states appear to be following a common template in responding to the global transition toward an energy system in which renewables play an increasingly central role. They are publicizing renewable energy targets, decarbonizing upstream and downstream oil and gas operations, commissioning renewable energy projects, and improving energy efficiency, among other strategies.

A closer look, however, reveals differences in how they have deployed solar and wind power capacity; space constraints exclude considerations of decarbonization and other climate-related activities.

With some of the highest solar irradiance levels in the world, the Gulf states have ample solar and to a lesser extent, wind, resources. Even though Kuwait was an early adopter of solar power in the 1970s and 1980s, the UAE is by far the regional leader in terms of installed renewable energy capacity (Figure 1). As an established market, however, renewable power projects in the UAE will grow more slowly than in Saudi Arabia. For instance, according to an estimate by the Arab Petroleum Investments Corporation, renewables will account for 22% of the value of all power projects in Saudi Arabia between 2021 and 2025 compared to 8% in the UAE. Consequently, by 2030, Saudi Arabia is expected to overtake the UAE with an installed capacity nearly twice that of the UAE’s if the kingdom is to meet its declared national target (Table 1). 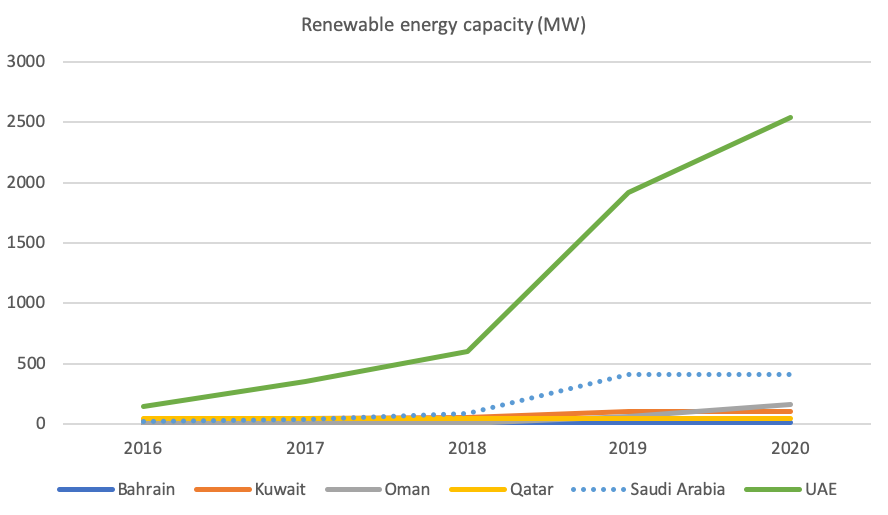 The UAE’s early and rapid rollout of renewable energy was driven by a shortage of domestically-produced natural gas for its power stations. Net imports of natural gas since 2008 — of up to two-thirds of total consumption — obliged the UAE to consider alternative energy sources, particularly those that could be generated locally for reasons of energy security. This, coupled with the UAE’s greater state capacity than its peers, a supportive business environment, and sovereign guarantees, facilitated the use of public-private partnerships to quickly deploy utility-scale renewable energy.

In comparison, Qatar and Saudi Arabia do not face fuel supply constraints and had much less incentive than the UAE to consider an early uptake of renewable energy projects. Moreover, for gas-rich Qatar, global uncertainties about the future of natural gas — in particular, the extent to which it is a bridge or destination fuel in the energy transition — mean that there is no first-mover advantage to embracing renewable energy.

As for Saudi Arabia, it was only the heightened risk of stranded oil assets in a world that was increasingly serious about decarbonization that prompted the kingdom’s belated push to switch from oil to renewables in power production. Since oil is more carbon intensive than gas, Saudi Arabia is more motivated than Qatar to monetize every barrel of exported oil as quickly as possible before a punitive global carbon regime arrives.

In Kuwait’s case, although it would make sense to substitute imports of liquefied natural gas with solar or wind energy, the country’s bottom position in governance and regulatory quality among its Gulf Cooperation Council (GCC) peers makes this challenging.

The second difference relates to state-owned companies in the renewable energy sector. Three of the Gulf states boast “national champions” involved in renewable energy at home and abroad, namely Acwa Power (Saudi Arabia), Masdar (Abu Dhabi), and Nebras Power (Qatar). In terms of scope of activities, Acwa and Masdar are primarily power developers and operators while Nebras Power is an equity investor. Nebras has the smallest asset portfolio at 6.5 gigawatts (GW) of generating capacity abroad; it does not have assets in Qatar. Acwa has over 42 GW of power projects while Masdar’s new partnership with Abu Dhabi’s Taqa and the Abu Dhabi National Oil Company (ADNOC) has doubled the size of its renewable portfolio from 10 to 23 GW. Masdar is the only one with an exclusive renewable energy mandate while Acwa and Nebras have fossil-fuel power stations as part of their portfolio. Going forward, Acwa intends to increase the gross capacity of renewable power from 33% of its total portfolio to 50% by 2030.

With regard to domestic shareholders, until recently all three were backed by their respective countries’ sovereign wealth funds (SWFs). Acwa was founded by private Saudi investors in 2002 with the Public Investment Fund (PIF) becoming a shareholder only after 2013; today, the PIF has a 50% stake. In contrast, Masdar and Nebras are fully state-owned entities. While Masdar has expanded its shareholders beyond just Abu Dhabi’s Mubadala SWF, Qatar’s SWF sold its stake in Nebras in January 2022, leaving the Qatar Water and Electricity Company as its sole shareholder.

The point here is that intra-Gulf economic competition — already evident in free zones, banking, airlines, and sports— is also reflected in the activities of national energy champions in developing countries. It is noteworthy that the creation of Nebras in 2014 coincided with the intra-Gulf crisis over Qatar that year and was arguably an attempt to use clean energy diplomacy to emerge from the shadow of Saudi Arabia’s traditional regional influence. In Uzbekistan, Acwa and Masdar have won contracts to develop its nascent renewable power sector while Nebras was part of a consortium that successfully bid to develop a gas turbine power plant. The modernization of Uzbekistan’s power sector certainly presents an attractive commercial opportunity for the Gulf (and other) states but the role of regional politics, including Turkey’s recent outreach to Central Asia, should not be dismissed as a motivating factor. In Jordan, Acwa and Nebras control 40% and 14%, respectively, of the country’s total installed power capacity; Masdar’s projects there account for 18% of installed renewable energy capacity. Gulf energy champions therefore augment the already sizeable contribution of their state sponsors to foreign direct investment, remittances, financial aid, and humanitarian assistance, giving the Gulf states considerable influence over a “strategic relationship.”

In other Gulf states, national oil companies and their subsidiaries take the lead in scaling up renewable energy capacity. Petroleum Development Oman’s deployment of over 1.2 GW capacity of solar and wind energy for its own internal operations outpaces Oman’s recently inaugurated 0.5 GW independent solar power plant at Ibri. In Bahrain, Tatweer and BAPCO account for almost all of the country’s utility-scale solar and wind energy capacity of just under 10 megawatts (MW). As for Kuwait, the tender by the Kuwait National Petroleum Company, a subsidiary of its national oil company, for a 1.5 GW solar park to generate 15% of the electricity used by the country’s oil industry, was issued in 2018 but cancelled in 2020 due to bureaucratic infighting. By contrast, Saudi Aramco and Abu Dhabi’s ADNOC defer to their respective national champions for domestic renewable energy deployment.

The state and state-linked groups continue to drive economic development in the Gulf. Nevertheless, the concerted push for economic diversification has opened up space for indigenous private firms in the renewable energy sector. For instance, to shape and consolidate his power base, Saudi Crown Prince Mohammed bin Salman redistributed the political and economic influence of oligarchic families and expanded it to co-opt newer groups, including the Abunayyan and al-Muhaidib families, who founded Acwa in 2002 and continue to be key executives and shareholders. At the same time, some of the more traditional oligarchic families, like Abdul Latif Jameel, retained their influence. Today, the latter’s renewable energy business, Fotowatio, has assets (including under development) of more than 5 GW outside of the kingdom.

In the UAE, well-established family-run conglomerates have likewise leveraged their reputations, existing customers, and financial strength to create new business units over the past decade. These specialize in developing small-scale solar power projects in the UAE, South Asia, and the Middle East and North Africa (MENA). Examples include Yellow Door (a spin-out from Adenium Energy owned by the Saudi AK Bakri family conglomerate and based in Dubai with distributed solar assets of 120 MW), Siraj Power (co-founded by prominent Emirati businessman Abdul Ghaffar Hussain of Green Coast Enterprises with distributed solar assets of 100 MW), and AMEA Power (a subsidiary of Al Nowais Investment, which is owned by one of the wealthiest families in the UAE, with solar assets in Africa). Successful companies that were established independently of ties with merchant families at the outset, such as Enerwhere, remain an exception.

More Gulf-based manufacturers of solar and wind components are emerging. Early frontrunners like DuSol and Maysun solar module manufacturers in Dubai have more recently been joined by counterparts in Saudi Arabia (Bin Omairah, Desert Technologies, and GTek) and Bahrain (Solar One), as well as by companies that produce solar inverters (Noor Inverter Technology in Dubai) and solar trackers (PV Hardware in Saudi Arabia). The current scale of their production lines is limited compared to the market share of imported renewable energy components. China’s Jinko Solar, for example, accounts for nearly one-third of the market for photovoltaic panels in MENA. Local demand is also circumscribed by caps imposed by state-owned utilities that limit the size of rooftop solar systems installed at industrial and commercial enterprises to 500 kW in Bahrain and 2 MW in Saudi Arabia and Dubai. Nevertheless, local manufacturers are hoping to benefit from higher levels of local (or even GCC) content requirements in Saudi Arabia and Oman despite questions over the efficacy and legality of such programs.

The different trajectories of renewable power capacity in the Gulf are a function of variations in initial and evolving conditions, including power mix, indigenous energy sources, state capacity and ambition, and state-business relations. Compared to domestic stakeholders like the government, state-owned enterprises, and private sector firms, households in the Gulf are an insignificant constituency. This is because the price of electricity, despite tariff reforms, continues to be highly subsidized, especially for citizens. That youths in the GCC appear to be less environmentally conscious than their peers in the rest of MENA suggests the limited role of bottom-up demand for additional renewable power capacity.

Greenwashing — or attempts to spin renewable power credentials to maintain social license for hydrocarbon production — may partly explain why the region consistently records the lowest level of renewable energy investment in the world (Figure 2). However, taking into consideration the role of domestic stakeholders, along with other regulatory and financial variations not addressed here, enriches analyses of renewable power policymaking in the Gulf. 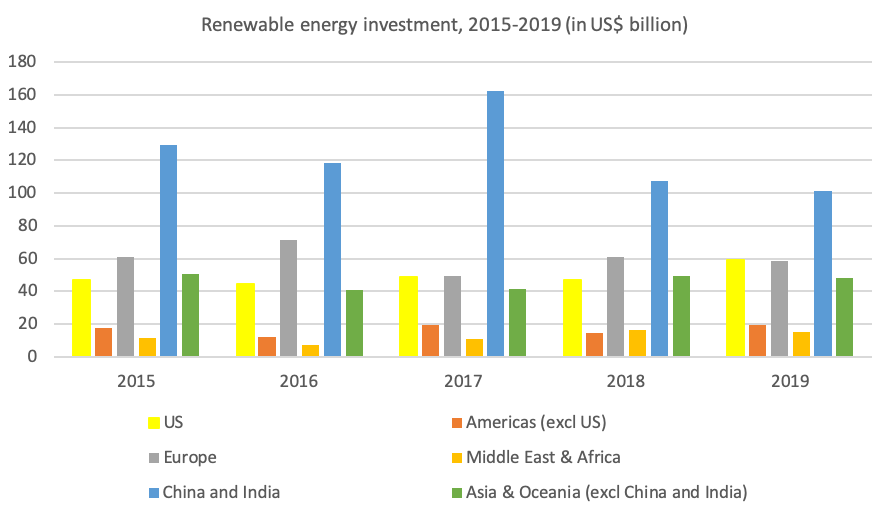 Dr. Li-Chen Sim is an assistant professor at Khalifa University in the UAE and a non-resident scholar with MEI's Program on Economics and Energy. The opinions expressed in this piece are her own.

Thanks to Iran, Israel emerges stronger as the US shifts its focus away from the Middle East