Return to the northeast: Syrian Army deployments against Turkish forces 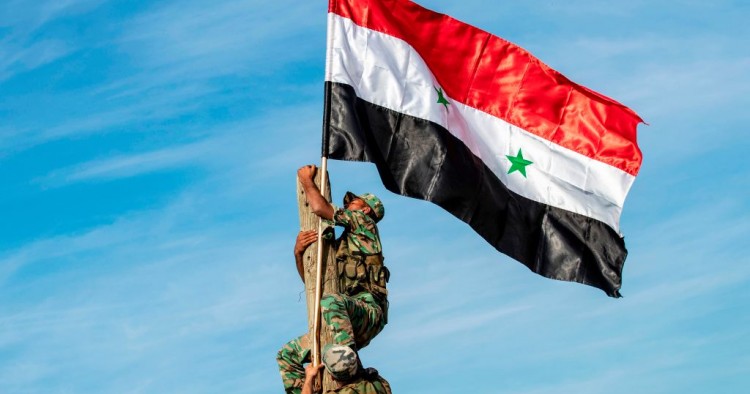 Five years ago, ISIS swept across northeast Syria, racking up a string of victories against the People’s Protection Units (YPG), Syrian Arab Army (SAA), and Free Syrian Army (FSA) alike. For Syrian loyalists, this defeat has been epitomized by the massacre at the Brigade 93 base and the defiance of one soldier, Yahya Adnan al-Shughri. Before ISIS militants executed the captured soldiers, they filmed themselves saying “Islamic State…” to which the prisoner would reply “remains” before being shot. But when it came to Yahya, he replied “by Allah we will erase it.” The story of his defiance and subsequent execution became a symbol for SAA veterans and loyalists of the regime’s expulsion from most of eastern Syria.

But on Oct. 14, 2019 units of the Syrian army returned to that base for the first time in half a decade as part of a deal between the Syrian Democratic Forces (SDF) and Damascus. That deal saw the SAA return to much of northeast Syria just four days after Turkey launched its offensive against the region alongside its rebel proxies. Aside from Brigade 93 and the adjacent town of Ain Issa, the Syrian Arab News Agency (SANA) released videos of SAA units entering the towns of Manbij, Kobani, Tel Tamar, and the border towns of al-Malikiya and Darbasiyah.

SAA units have since engaged in direct combat with Turkish forces and Turkish-backed FSA units, suffering dozens of casualties including that of the military commander of Hasakah Province, Maj. Gen. Ahmed Sharif Ahmed, who was wounded in an apparent Turkish artillery attack on Nov. 9. By examining the distribution and make-up of units sent to the northeast we can better understand the strength of the SAA in the region and the current state of the broader SAA deployments across the country.

SAA and Russian military units have been stationed between Manbij and Turkish-controlled north Aleppo since at least December 2018. These deployments initially consisted of one or more battalions from each of the 1st Armored Division’s 57th and 68th brigades, the 846th Motorized Battalion and the 282nd Mechanized Battalion, as well as unknown units of the 106th Brigade Republican Guard. On Oct. 20, 2019 a member of the Republican Guard’s 104th Brigade posted a picture of tank on a flatbed with the caption “to Manbij god willing, the men of the Republican Guard’s 104th Brigade.” Syria analyst Mathieu Morant informed the author that the tank pictured contained the markings of the 5th Corps, raising questions about whether or not the unit actually belonged to the 5th Corps or if the 104th Brigade was simply “borrowing” the equipment — a common enough practice throughout the war. In the same month the Republican Guard’s 100th Artillery Regiment deployed at least two field guns and two BM-21 GRAD launchers in the Manbij area.

On Oct. 14 loyalist pages announced that the 57th Brigade and Republican Guard’s 30th Division were moving to Kobani, although it remains unclear which elements of the 30th Division were involved, and other posts indicated that the 105th Brigade had moved to the town as well. What is confirmed, however, is that the Republican Guards have a presence in the town, as can be seen in the patch worn by the soldier interviewed in this Oct. 18 SANA video. Finally, on Oct. 23 units of the Border Guard’s 12th Regiment moved through Ruseifa on their way to Kobani, arriving as early as Oct. 25. Northeast Aleppo remains the only front with Republican Guard deployments, perhaps indicating a higher degree of importance for the regime.

The north Raqqa front appears to be entirely manned by elements of the 5th Corps. On Nov. 6 a local Qamishli page posted a picture of at least 15 technicals, stating that the 2nd Battalion of the 148th Regiment was moving toward Tabqa. On Nov. 8 a member of the General Intelligence Branch 330 posted a selfie in front of a half-dozen buses loaded with armed men claiming that they were part of the 148th Regiment arriving in Ain Issa. There they joined the 3rd Battalion of the 5th Corps’ 7th Brigade, which had arrived in the area of the city by Oct. 26. Similarly, a member of the 5th Corps’ 5th Brigade shared several photos and videos of his convoy leaving Idlib for Raqqa between Oct. 23 and Oct. 24. Also on Oct. 24, a Deir Ez Zor news page announced that Col. Qasim Shara' of the Republican Guard's 104th Brigade was leading a battalion from the Deir Ez Zor countryside to Raqqa. On Nov. 20, Col. Shara'a was wounded and a member of the Republican Guard's 476th Battalion was killed by a landmine near Ain Issa. Lastly, members of the 103rd Artillery Regiment shared pictures of their convoy “going to Raqqa” on Nov. 4. The exact affiliation of the 103rd is unclear; this author believes it belongs to the 5th Corps, while Syria analyst Mathieu Morant believes it is a Republican Guard unit.

All of these are experienced units. The 3rd Battalion and both regiments have participated in much of the anti-ISIS fighting in central Syria, while the 5th Brigade proved itself the most effective 5th Corps unit during the spring 2019 fighting in north Hama. The 148th Regiment also has an interesting tie to the northeast. On Sept. 24, 2019, STEP News reported that 170 men who had reconciled with the regime in Hasakah Province had been sent to Aleppo to join the 148th Regiment. Like most of those who reconcile and join the 5th Corps, these men had been promised they would not be sent out of their province. In a cruel twist of fate, it seems they have indeed returned to serve near their homes.

The Tel Tamar front of Hasakah had seen the bulk of fighting between all sides since the SAA deployed along the frontlines. As such, there is a much wider variety of units deployed in the area. The main SAA forces appear to be two battalions of the 54th Regiment, a formerly independent special forces regiment that has since come under the command of the 17th Division. The 17th Division has historically been in command of northeast Syria but suffered significant attrition following the widespread successes of ISIS in the area.

The 54th Regiment seems to have initially deployed its two battalions to the border between Ya'rubiyah and Qamishli on Oct. 16. A post on Oct. 20 by a Qamishli Facebook page expanded on this, claiming that the 23rd Battalion was headed toward the border town of Ya'rubiyah and the 79th Battalion was moving to Malikiya. However, on Oct. 23 the commander of the 23rd Battalion, Col. Ali Shourba, was pictured “in Tel Tamar,” and on Oct. 29 the 54th Regiment reported its first deaths in Tel Hawa. The regiment has suffered at least six more deaths since then, and the commander of the 79th Battalion was wounded in the same Nov. 9 attack that wounded Maj. Gen. Sharif. The border towns to which the 54th Regiment had.

Local Facebook pages reported the arrival of units from the 17th Division’s two artillery regiments in Tel Shamran, south of Tel Tamar, on Oct. 28. However, other reports stated that the 123rd Regiment had previously attempted to reach Tel Tamar on October 23 but was forced to turn back. Reinforcing the largely 17th Division presence on this front is one battalion from each of the 3rd and 10th divisions. On Nov. 7 a funeral was held in Qamishli for a 3rd Division fighter from the 20th Brigade’s 38th Battalion. This death corroborates claims on Nov. 3 that elements of the 3rd Division had arrived in Tel Tamar. Likewise, elements of the 10th Division’s 62nd Brigade were filmed driving through northeast Syria on Oct. 20. On Nov. 7 the pro-regime blog al-Masdar published a poorly written post claiming that a battalion of the 10th Division had deployed to Tel Tamar. This battalion directly engaged in fighting by Nov. 11.

Notably absent from this front is the Hasakah branch of the National Defense Forces (NDF). According to local members, the Hasakah NDF has refused to deploy alongside the SDF for two reasons: deep animosity between the NDF and SDF rooted in the August 2016 fighting between the two sides, and an unwillingness to lose men in what the NDF views as a pointless back-and-forth battle. Further complicating issues is the severe divide within the city’s NDF. Abdulkadeer Hamo controls the NDF units in the Kawkab military base while Hussam Ismail was recently placed in charge of the NDF units within the city itself. The elevation of Ismail came in mid-October during negotiations between the SAA and SDF, the latter of which wanted Hamo removed from power. The NDF has chosen to sit out the current battles, a popular move among loyalists in Hasakah, and use this time to try to unite its two factions.

As shown above, the Syrian regime’s military deployments to northeast Syria have largely relied on sending one or two battalions from nearly two dozen divisions and regiments. This wild cocktail of units has surprised some loyalist soldiers I have spoken to, unsure as to why such a complex deployment has been carried out. In all likelihood, this is driven by a combination of two factors: there are few to no full brigades available to deploy at this time, as forces are still massed in north Hama, fighting in Latakia, engaged in daily battles with ISIS in central Syria, or dealing with an increasingly ferocious insurgency in southern Syria. In fact, the 3rd and 10th divisions were the only divisions not substantially deployed in 2019.

Furthermore, these deployments reinforce a trend visible since the beginning of the war: The SAA overwhelming deploys units within specific geographic boundaries. Thus, Republican Guard and 1st Division units assigned to East Aleppo last year moved only as far as Kobani and 17th Division units based out of Hasakah moved just north to Tel Tamar. Ain Issa, far from any current SAA deployments, was assigned to the 5th Corps, the one corps designed specifically to be deployed anywhere in the country. By sending one to two likely battalions from this mélange of units, the regime has probably fielded between 4,000 and 10,000 men.

What exactly the SAA hopes to achieve in the battles around Tel Tamar is unclear, as Turkey and Russia continue to be the real powers behind their respective Syrian affiliates. The fate of the town would therefore seem to rest not in the hands of Syrians, but will likely be determined by the agreements Ankara and Moscow reach. Yet, as in all things with Syria, there is no knowing how permanent this dynamic may be.

Gregory Waters received his B.A. with Honors in Political Economy and Foreign Policy in the Middle East from the University of California, Berkeley, in 2016. Since then he has researched and written about the Syrian civil war and extremist groups, primarily utilizing Syrian community Facebook pages for his projects. The views expressed in this article are his own.

Inside Syria's Clapping Chamber: Dynamics of the 2020 Parliamentary Elections

The Challenge of Foreign Fighters: Repatriating and Prosecuting ISIS Detainees