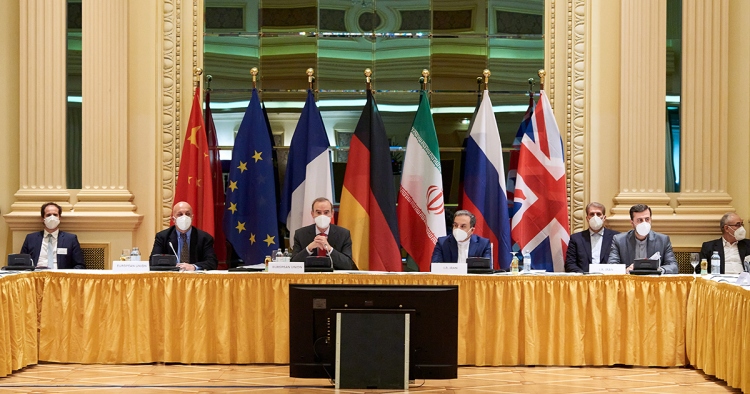 It’s easy to see why there’s an enduring attraction for a regional security dialogue in the Middle East. Countries in the region face shared and borderless challenges — including terrorism, insurgency, environmental safety, arms races, cybersecurity, maritime piracy, and the proliferation of weapons of mass destruction — that can be dealt with more effectively through multilateral measures.

Such a regional framework is now incredibly important because it could either make or break any deal the Biden administration forges with Iran to limit its nuclear program. Indeed, even the most reasonable U.S.-Iran nuclear accord will have a low chance of pacifying the region and being accepted by Washington’s regional partners if it is not accompanied by comprehensive security talks that address, among other things, Iran’s ballistic missiles and proxy threat network. Naturally, such talks require a regional forum in which ideally all key regional powers participate.

The good news is that most states in the region, including the main antagonists Saudi Arabia and Iran, have publicly endorsed the concept of a regional security dialogue. The bad news is that significant obstacles remain, some old, some new.

The Saudis, the Iranians, the Americans, and the Russians have all expressed an interest at several junctures in holding a regional security dialogue.

The latest promising language has come from Saudi Arabia. Amb. Rayd Krimly, the head of policy planning at the Saudi Ministry of Foreign Affairs, stated on April 14 that “we can begin by a nuclear deal and move on to another format that will discuss all these issues in a positive manner … and begin by confidence-building measures.”

Krimly’s statement came days after a report suggesting that the Saudis and the Iranians have been holding low-level talks on Yemen and Lebanon in Baghdad since April 9, although neither side has confirmed the bilateral talks, with one senior Saudi official denying they even took place.

Iran has been eager to hold a regional security dialogue ever since it was disinvited by Washington to multilateral talks launched in 1991 as part of the U.S.-led Middle East Peace Process in Madrid (though these didn’t amount to much and died four years later because Egypt and Israel couldn’t agree on the sequencing of nuclear disarmament and arms control issues).

On March 16, Iranian Foreign Affairs Minister Mohammad Javad Zarif stressed that his country was “ready to hold talks with all neighbors,” underscoring the merits of an initiative he proposed in September 2019 during a special session at the U.N. Security Council called the Hormuz Peace Endeavor, or HOPE. Most curiously, HOPE calls for a non-aggression and non-interference pact that’s similar to the one found in the Conference on Security and Cooperation in Europe (CSCE). Earlier this year, Zarif tweeted, “Our dear neighbors, the opportunity is available to us to re-reflect on the issue of regional security.”

President Joe Biden has said he intends to enter subsequent negotiations with Iran to achieve a “longer and stronger” deal that would address the security concerns of America’s regional partners. Secretary of State Antony Blinken stated in his confirmation hearing in January 2021 that “it’s vitally important that we engage on the takeoff, not the landing, with our allies and partners in the region, to include Israel and to include the Gulf countries.”

The Russians have offered constructive rhetoric as well, suggesting the establishment of an Iran-Gulf Cooperation Council (GCC) dialogue. Asked about it in the Munich Security Conference in 2018, Russian Foreign Affairs Minister Sergey Lavrov said, “We have been discussing it for at least 15 years now. We stressed the importance of them considering this initiative at every ministerial meeting with our GCC colleagues.”

Then on March 31, 2021 during the Valdai Discussion Club, Lavrov reemphasized Russia’s interest in a Middle East forum resembling the CSCE, stating, “Our proposals include the military-political aspect, such as trust-building action, military budget transparency, mutual invitations to military exercises and joint exercises. There is also a political dimension, which includes restoring diplomatic relations between all countries. Economic contacts must be unblocked. This represents an integrated approach.”

Yet as encouraging as these statements from Riyadh, Tehran, Washington, and Moscow are, no concrete actions have been taken, and none is expected to be taken any time soon, because of fundamental disagreements among at least three of these main parties.

Although the Iranians have advocated for inclusivity in a regional security dialogue, in addition to Israel, one side they would very much like to exclude is the West, and particularly the United States. “There won’t be ANY talks about OUR region with [the Americans and the Europeans] as they’re the problem themselves,” affirmed Zarif on December 8, 2020.

Tehran has even linked any compromises it might make regarding its missile program and regional proxies to America’s military withdrawal from the region, which surely no American president will entertain regardless of the U.S. shift to the Indo-Pacific.

These unrealistic preferences, if not conditions, of Iran are neither illogical nor surprising. No matter how sincere Tehran is about a non-aggression and non-interference pact with the Saudis and others in the region, Riyadh isn’t the party from which the Iranians really want to extract concessions The number-one worry of the Iranians is and always has been America’s military power in the region, followed by Israel’s, not the capabilities of the Saudis, or the Emiratis for that matter. It is the U.S. footprint, more than anything else, they want to reduce and ideally remove from the region.

So while it might be beneficial for Tehran to have a good-neighborly agreement with Riyadh for public diplomacy and reputation-polishing purposes, practically speaking, it’s a less significant accord that wouldn’t help it achieve its more important security objectives.

There is one thing, however, the Iranians want from the Saudis and the Gulf Arabs: money. Tehran would love to enlist Riyadh and Abu Dhabi’s help in relaxing or eliminating U.S. economic sanctions against it either through lobbying in Washington or through enhanced bilateral economic cooperation.

But this cash-for-missiles bargain is not a good foundation for a productive security dialogue. In the absence of symmetry on the issues and some level of mutual vulnerability, it’s hard to see how the Iranians and the Saudis would go far in their negotiations and make mutual concessions.

It is for these reasons that Saudi Arabia has major qualms about a regional or bilateral security dialogue with Iran. It simply has zero trust in Iran’s intentions given the latter’s aggressive behavior across the region.

That’s why when he was asked in February 2020 whether Saudi Arabia would enter into talks to resolve its differences with its Iranian nemesis, Saudi Foreign Affairs Minister Faisal bin Farhan provided the same answer as all of his predecessors: “Our message to Iran is to change its behavior first before anything is to be discussed. … Until we can talk about the real sources of that instability, talk is going to be unproductive.”

On the one hand, you can’t fault the Saudis for not wanting to talk to the Iranians while the Houthis are lobbing deadly projectiles at their cities and airports. On the other, the whole point of a dialogue is to try to find solutions to problems and manage differences wherever possible.

But the Saudis are unwilling to lift a finger not only because they have no faith that the radical regime in Tehran would ever change its ways, but also because they have little confidence that the Americans would stand by them during and after negotiations and offer them a serious security commitment. The last thing the Saudis are going to do is enter into talks with the Iranians with a much weaker bargaining hand.

Aside from Riyadh’s concerns regarding U.S. security reassurance, the Saudis are not so sure either about their own ability to effectively negotiate with the far more seasoned Iranian diplomats and technical specialists. This isn’t just about strategic leverage. It’s also about negotiations expertise and specialized knowledge of complex issues, including risk reduction, dual-use technologies, weapons ranges and payloads, and verification mechanisms, which the Saudis lack.

The Iranians have accumulated years of diplomatic experience partly by negotiating with the Americans and other major powers and learning how to get their way. If regional talks were to be launched with no meaningful U.S. engagement, the Iranians would have the upper hand at the negotiating table.

Further complicating the possibility of a regional security dialogue is the blossoming relationship between the Israelis and the Gulf Arabs.

There’s a lot of good in the Abraham Accords, the recent normalization deals the UAE and Bahrain struck with Israel — and Saudi Arabia might join one day when the 85-year-old King Salman passes and his son Crown Prince Mohammed bin Salman takes over. Indeed, any historic breakthrough in Arab-Israeli relations that could open the door for stronger security and economic cooperation between the two sides should be welcomed.

Also, it’s nice to have a powerful Israeli friend in your corner.

That said, befriending a trigger-happy power, whose worries about the Iranian theocracy run deeper than anyone else’s given the mullahs’ declared commitment to the destruction of the Jewish state, puts the Gulf Arabs in an awkward and potentially dangerous position.

Furthermore, Israel has no interest whatsoever in sitting at the table and talking to the Iranians about anything. The same goes for the Iranians, who don’t even recognize the Israelis.

Should the ongoing conflict between Israel and Iran escalate — which is not unlikely given the latest confrontations both on land and at sea — the Iranians will first go after the weaker Gulf Arabs, not Israel. That’s exactly what they did in September 2019 when they hit Saudi Arabia’s oil infrastructure with missiles and drones, even though the attack at the time was in response to the Trump administration’s economic sanctions.

As critical and urgent as a regional security dialogue might seem, it’s probably not going to happen anytime soon because those who are most aggressively calling for it — the Iranians — want it for all the wrong reasons; those who might benefit from it the most — the Saudis — are deeply hesitant to take part; those who have an instrumental role to play — the Americans — are busy with other priorities and unclear about their level of commitment to their regional friends; and those who historically have had little patience for multilateral fora — the Israelis — will continue to rely on self-defense and play the spoiler role.

How this all can be squared as the Americans and the Iranians continue to negotiate on nuclear issues in Vienna (albeit indirectly for now) is very much unclear. If and when Washington and Tehran come to an agreement, the U.S. side will realize that whatever promises they made to their regional friends regarding addressing their security concerns will prove to be much more difficult to honor.

Bilal Y. Saab is Senior Fellow and Director of the Defense and Security Program at the Middle East Institute. The views expressed in this piece are his own.

Photo by EU Delegation in Vienna via Getty Images